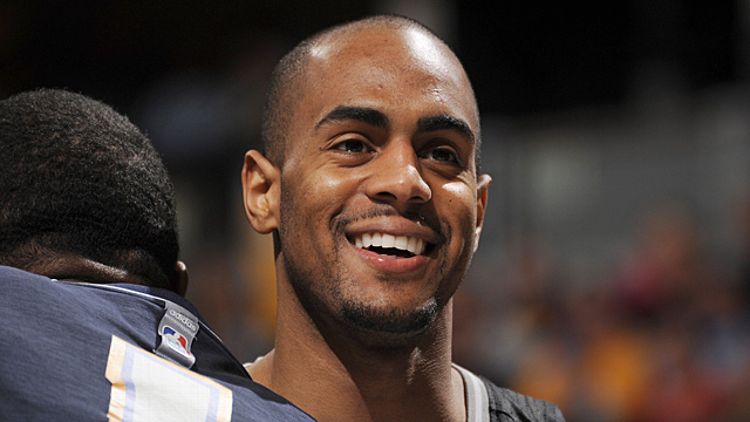 In typically detailed and autobiographical Kendrick Lamar fashion, “Black Boy Fly” takes us back to his days at Centennial High School, where he observed classmate Afflalo succeeding on the basketball court and in the classroom, poised to be the one to make it out of Compton.

Lamar is basking in the glow of that brilliantly bold debut album and being spotted courtside at Staples Center, while Afflalo is playing for an Orlando Magic team that lost Dwight Howard to the Lakers. At the halfway mark of the NBA season Afflalo has shown his worth, emerging as Orlando’s leading scorer. In two separate trips home to California this season, Afflalo led the Magic to victories over both the Lakers and Clippers. Making Lamar’s lyrics in “Black Boy Fly” come to life like he was back at Centennial High, he scored 30 both times his team schooled the squad from Los Angeles.

I recently caught up with Afflalo to discuss his shout out in Lamar’s song, but the conversation quickly turned into something deeper as topics like success and motivation came up. After listening to Afflalo detail how he’s trying to make the most out of each day, it’s easy to see why Lamar admired his former classmate.

So, how does it feel to be a focal point in Kendrick’s track?

Click here for all of our interviews with fascinating people from the worlds of sports and pop culture.
It feels good. It feels really good. It’s more of an appreciation to Kendrick than to myself. For him to take notice to what it takes to succeed and for him to continue to stay on the path that he was on and continues to be on, I think that’s an absolute great thing. The message I got from the song, although I was used as an example, was he had a really great point to making it out of tough circumstances.

What do you think about the track?

Listening to Kendrick’s music a lot — and if you really listen to what he’s thinking about, more than the beats — the lyrics and the message that he gets across is very relatable to a lot of people. Not just people in that community, but to people who deal with struggles in general. I thought it was an absolutely great track. I still listen to it every day.

How did you hear about the track?

I had gotten a few text messages about a song they had heard. Honestly, I wasn’t quite sure what they were talking about. I saw a few things on Twitter and I finally listened to it.

Do you remember high school Kendrick?

I remember Kendrick in school, back then … and now meeting up with him these past few years and going to watch a few shows. To see his evolution, a lot of people always see success at the very end, but they don’t see the process that people go through to get to the level of success that they have. I’m just really proud of him. I think it’s pretty cool. It’s not that we hung out every day or anything like that, but at the same time, I would see him around and obviously he stayed on his grind and continued to persevere and learn along the way.

As you said, most people only see the success, they don’t see the hours and work and everything that happens without the lights being on.

Only because I know the type of person I am and I can only imagine being in Kendrick’s position at that time. If I felt like I was one of the more blessed rappers or basketball players, whatever you want to call it, in my heart at the time, but I knew I was years away form achieving that, I would find it difficult to sit back and see others on their path. At the same time, he took it the right way. It didn’t make him shy away from his dreams or his goals, it made him want it even more; to see other people getting out of Compton, not to be discouraged by it, but to tackle that mission impossible of making it out. I think it’s just an absolutely great thing.

Did you have a similar mind-set yourself? Did you just block out distractions and focus on the end goal?

Yeah. And that goal hasn’t stopped for me. To this day, I’ve reached this certain level of success in the NBA, but obviously I’m not at the top of it. Pride, work ethic, and childhood fire that a lot of kids develop coming from that area, it’s still in me. To this day it continues to allow me to push. I’m sure it’s doing [the same] for him.

How are things for you right now, basketball-wise?

With the departure of Dwight Howard to the Lakers there’s a lot of criticism or low expectations about our team and it’s a great challenge for us. I would say the opportunity for greatness within this situation is that much better, simply because of the lack of expectations for us. For us to do something really special would be that much sweeter, and our team seems to be geared around making something great happen.

Is that something that bonds a team together or strengthens the resolve within the locker room?

It does. A lot of these guys have their own individual stories with trying to make it to the NBA, but now for us to bring all of that, things that have made each of us individually special, to bring it to this moment and work together for that same cause, to prove we can be successful together regardless of what people say.

It’s interesting to hear you talk about making it. A lot of guys in the league, especially young guys, don’t have the ability to see beyond the now … this contract, this team, this situation. Where does your self-awareness come from?

It’s just something that’s somewhat unexplainable, in a sense, because I’ve always felt a sense of greatness as a kid. I’ve always felt a lack of satisfaction of where I’m at. Before I even got to the NBA, college, high school, anything else, there was always a feeling inside that I could do better, I could be better. It just hasn’t changed, regardless of the level of success I have in the NBA. Honestly, I can’t stop because it’s not fulfilling to me. I guess that’s where work ethic comes from. There’s an extra incentive to push through struggles or push through disbelief. I don’t know if that comes from my background, my upbringing, partially due to the environment that I grew up in, but it’s the truth. Honestly, I can’t stop because failing or staying where I’m at just doesn’t feel good. I have no choice but to get better.

What’s your first memory of feeling like there was something bigger for you than the normal everyday 9-to-5 job?

I would say when I was 7 or 8 years old, yeah. I always felt like I was better than kids in terms of basketball, kids my age. My dad would make me play against older kids. It increased my work ethic. Whenever I’d play kids my age, I’d think I was more talented or that I could compete and win, and that feeling just hasn’t changed. Even though when you get to the NBA level, there’s guys they say you will never be better than because you don’t have a certain skill set or a certain height or a certain athleticism that you can’t achieve the highest honors in the NBA, being an All-Star or winning a championship, things of that nature — I just never listen. That just doesn’t make sense to me.

You’ve played with a lot of very good players. Does anyone stand out as a mentor?

I played with Chauncey Billups in Detroit and in Denver, and he’s always had some influence in my career. More than that, he had been through some situations early in his career where people had written him off. He persevered through that to become a five-time All-Star in the NBA. He’s always been a great person to listen to as a mentor. Not only from an experience standpoint, but from a reliability standpoint. I kind of see his struggle and understand it. This wasn’t a person that had been given everything in the NBA. He had actually earned it.

Do you think it can be tough for young players who come into the league with expectations thrust upon them while also having things handed to them without having to work through things? Are things taken for granted?

It’s very true. I kind of think it determines the outcome of your career in a sense. Most importantly, the outcome about how you feel about your career. Some guys are handed starting roles or larger contracts or things that other guys have to earn. Honestly, kids that worry about struggles sometimes should really appreciate them. If you truly have to earn what you receive, you won’t take it for granted.

What’s the best part about being an NBA player? Besides supporting yourself and your family by playing the game you love, what else makes it so great?

For me it’s purely being able to dedicate my life to something that I love. I think that’s most important. Some guys are in the NBA because they’re very athletic or tall or whatever and it is a job to them. For me, basketball is something that I genuinely do all day long for fun. And now I get to do it all day as a job. For me, it hasn’t changed. It’s still fun. I just love it. I think that’s absolutely the best part about it.

How did you fall in love with the game?

I just remember playing when I was little. I guess it’s my personality. An addictive personality toward things that I love. I have to give credit to my dad because he played basketball in his local leagues or whatever and he brought me around. So because he gave me a basketball and not a mic … if he had given me a mic or a football or a pencil I might have been trying to be great at something else. He gave me a basketball and at that point I took the tools I had to be the best that I could at basketball.

Holly MacKenzie (@stackmack) covers the Toronto Raptors for Sportsnet.ca and the rest of the NBA for various sites and magazines. Her Twitter handle was inspired by Stephen Jackson, and the draft class of ’96 holds a special place in her heart.