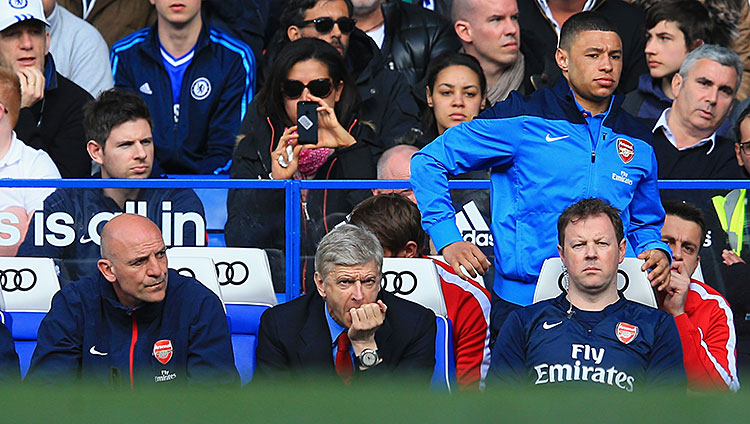 Poor Alex-Oxlade Chamberlain. When you have a 15-minute stretch as poor as the one the Arsenal midfielder had against Chelsea on Saturday, you usually at least get to disappear afterward. A turnover leading directly to a goal, getting caught out of position up the field for a second, and then a (possibly harsh) red card for handling the ball on the line for a third goal is about as bad as it gets. After a quarter of an hour like that, a player’s only relief is that at least he gets to fade away, out of the limelight, back in the dressing room after being sent off. Poor Ox was denied even that.

It is a unique quirk of football that when a player gets a red card, he manages to escape immediate attention. He disappears down the tunnel as his 10 teammates play on, and in fact is generally assessed either a one- or three-game suspension, leaving him completely out of sight, and largely out of mind, for the next several weeks. By the time he reappears, his transgression is largely reduced to a throwaway line at the top of a broadcast. It isn’t hockey, with a highly visible penalty box, or even rugby, with its spectacularly named sin bin. So, while the impact of a red card on a game is larger than pretty much any infringement in any other sport, the person who commits it suffers largely in absentia. Unless your name happens to be Alex Oxlade-Chamberlain.

Chamberlain, of course, committed the crime and then watched as referee Andre Marriner forced teammate Kieran Gibbs to do the time, showing Arsenal’s leftback a red card (even though Chamberlain was caught on tape clearly telling Marriner that he had the wrong man). Not only did Chamberlain cost his team a goal and a man, he then had to stay on the field to experience the continued demolition that followed. Although, mercifully, with the game already 4-0 at halftime, Arsene Wenger took him off in an effort to stop the bleeding and bunker down the defense. And hey, Arsenal gave up only two more in the second half, so that worked.

Contemplating Chamberlain’s afternoon is both emotionally appealing and disheartening at the same time. On the one hand the idea that he was forced, through extremely bizarre circumstances, to deal with the mess he created, has a sort of vindictive catharsis to it. You did this, now live with the consequences. But, at the same time, it’s impossible not to feel like giving Ox a good old Robin Williams “it’s not your fault” hug. Starting him in the central midfield on the road against Chelsea was a gamble that Wenger, needing to win to stay in the title hunt, had to take, even if it was unlikely to pay off. And while Chamberlain certainly isn’t a stranger to central midfield, he almost never plays there against top opposition. When he’s playing in the middle, it’s because Wenger thinks Arsenal can control possession. The manager, who was in charge of his 1,000th game for the North London club on Sunday, failed in his gamble, and Chamberlain’s defensive naïveté and inexperience being pressed in the middle of the pitch were exploited. And, having been exploited, he wasn’t even permitted a humane early exit.

Is it possible to find any positives for Arsenal to take away from Saturday’s mauling? Well, they didn’t seem to pick up any more injuries, a minor miracle following recent weeks. The loss leaves them firmly out of title contention, but with a hefty lead for Champions League places, which means it’s pretty safe for them to prioritize the FA Cup and the chance to end a long trophy drought. So, there’s that. And maybe Arsenal can take heart from one of the weirdest football sentences ever conceived: After getting red carded, Alex Oxlade-Chamberlain really didn’t play all that badly. Poor guy.