Paris Is Rising: The Magic of the Champions League 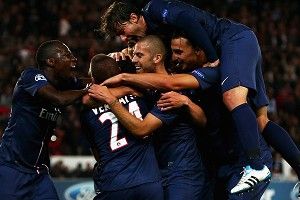 The singing continued into the streets surrounding Parc des Princes last night long after the match ended. As fans exited the stadium the chants of “Allez Paris!” and “Paris est Magique!” were heard just as loudly as they were in the stadium. Down Rue du Sergent Maginot they went singing in reverie and into the Metro station at Porte de Saint-Cloud with the sounds of “Ô Ville Lumière” echoing in the narrow subway tunnel. “Ô Ville Lumière sens la chaleur de notre cœur …” This was not a night for restraint, as waves of young men, beer now leaking from their pores, were completely unhinged, banging on the train doors, yelling obscenities with big smiles on their faces, and still in full voice from what they witnessed just moments ago.

Once on the train, the boys from the banlieues knocked out the lights in the train car and sang all the way from Porte de Saint-Cloud past Ranelagh, and Rue de la Pompe, and perhaps long after Saint-Augustin, where I got off the train. It was now long past 11 p.m., and at each subway stop old men and women who just wanted to get home for a quiet night’s sleep cowered and hurried to other subway cars that weren’t populated by a wild mob of Paris Saint-Germain fans. The sounds they wanted to escape were those of satisfied hunger.

Eight years they waited for this. Champions League football at Parc des Princes. The fans in the Auteuil and Boulogne stands were in full voice from the word “go.” If anyone thought of sitting last night, that option was removed with the chant of “Ceux qui ne sautent pas sont Marseillais!” (If you don’t jump you’re a Marseille fan.)

For the first time this season Paris Saint-Germain blew away their opponents. Dynamo Kiev was out of their depth from start to finish and their fans, a smattering of shirtless, barrel-chested and beer-bellied Ukrainian men, were mostly silent throughout. The match ended 4-1, but could easily have been worse. By halftime the result was beyond doubt. The only question, for me, at the start of the second half was if Taye Taiwo, an ex-Marseille player now on Kiev, would be booed and whistled as mercilessly in the second half as he was in the first. The answer was yes and the chants of “Taiwo! Taiwo! Dans ton cul!” (Taiwo! Taiwo! Up your ass!) never eased up.

PSG opened the scoring in the first half when Jérémy Menez, whose penetrating off-the-ball runs left the Kiev defense dazed and confused, was brought down in the box after a quick change of direction. Zlatan Ibrahimovic calmly dispatched the penalty into the back of the net to give PSG a 1-0 lead. The rout was on. Minutes later Thiago Silva scored from a corner on his debut and then fellow Brazilian defender Alex slotted home another corner to give PSG a 3-0 lead at halftime. By the 57th minute it was all exhibition stuff and the home crowd started the “Olé!” chants.

Carlo Ancelotti once again got the team selection right, going with an inexperienced midfield-three (average age of 23) of Blaise Matuidi, Clement Chantome, and Marco Verratti. Chantome’s work rate was impressive and Verratti was imperious. The youngster completed 82 percent of his 78 passes and was again the only player who didn’t score a goal whose name was chanted. Last night the rest of Europe saw what everyone from Pescara to Paris already knew. The kid is the real deal.

After a few false starts, the team is starting to find its feet. The subtle tactical switch of playing Menez at the point of attack with Ibrahimovic dropping deeper, playing almost as a creative midfielder, has confused defenses in PSG’s last two matches. The main beneficiary so far has been Javier Pastore, who scored in his second consecutive match when he netted PSG’s fourth goal in stoppage time. Pastore now seems to have little responsibility beyond running onto through balls and pressuring opponents high up the field, and the freedom has brought some flashes of his form last season, when he scored 13 goals. The introduction of Thiago Silva brought calm to the defense. Silva is comfortable on the ball and a good distributer when PSG switches from defense to attack.

The biggest blotch on the night wasn’t Kiev’s goal but that Mamadou Sakho, who was a starter in every other match this season, did not play. Sakho revealed earlier this week that his cell phone ringtone and the sound of his alarm clock is the Champions League anthem, but a thigh injury kept him on the sideline last night. With Silva and Alex’s performance last night, it’s hard to see him forcing his way back into the side when healthy. If there was disappointment with Sakho’s absence, you couldn’t tell by listening to the crowd. It was pure joy. This is what the Qatari money has brought to Paris: Champions League football and a fan base that’s been hungry for it. When I got off the train at Saint-Augustin, the boys in the blacked-out train car chanted “À la prochaine, à la prochaine, à la à la à la prochaine.” See you next time.

Filed Under: Champions League, Soccer, We Went there