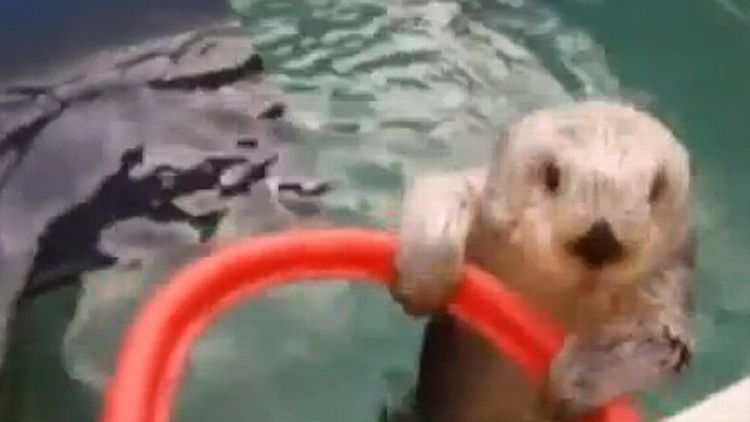 So much amazing is happening, and the Shootaround crew is here to help you keep track of it all. You’ll find takes on moments you might’ve missed from the previous night, along with ones you will remember forever. And also ones that happen in zoos.

Shout-out to Grantland copy editor Dave Mesrey, who must have seen this come through his “sea otter dunking” Google Alert. This is the most interesting thing that’s happened in basketball today. Hold your head, Terrence Ross.
— Chris Ryan

Some people might be wondering, “Wait a second, is this the third blog post labeled as a ‘Shootaround’ on Grantland today?” Well, to you, person who is very invested in the labeling and categorization of blog posts on Grantland, there’s only one thing that could bring this collection of minds together, and that’s a YouTube video of an arthritic sea otter by the name of Eddie dunking a basketball.

Some people, namely this blog’s assistant editor, Robert Mays, would have you believe that there’s nothing “that impressive” about this feat, that the otter was just dunking for his health and thus didn’t overcome anything. The fact is, there’s something about Eddie gleefully dunking (which I’m assuming he’s doing right now as we put these words on the Internet) in the face of naysayers like Robert — people who don’t respect or appreciate overcoming obstacles and achieving greatness — that makes the whole thing even more inspirational. The only thing more impressive than just success is success in the face of haters. Also, fun fact: Robert Mays cannot dunk. So there’s that.
— David Cho

Too Good to Be True

Listen, I love dunking. You love dunking. We all love dunking. I’m just saying that at some point, this otter is going to have to take an offseason and ask himself what type of player he wants to be. Right now, he’s 2010 Blake Griffin. It’ll be on him to develop a post game or become a force in the midrange. He’s not getting any younger.

Also, I feel like somebody has to be the one to ask the tough questions here. This otter is 16 years old, with a bunch of injury issues, and suddenly he’s playing the best ball of his career? That doesn’t just happen. I’m not saying he’s doping, but I am saying that I wouldn’t be at all surprised if he were. We can’t just believe these stories because we want to anymore. We know too much.
— Robert Mays

A Design for Life

This video is the most adorable thing involving sea otters that I’ve seen since this video of them holding hands. Also: “Eddie almost never misses, and if he does miss, he keeps going until he makes it.” I’m adopting this as my new life motto, and nothing will ever replace it. Ever.
— Patricia Lee

“Eddie almost never misses, and if he does miss, he keeps going until he makes it.” — Eddie’s trainer

Not impressed. Not one bit. “If he does miss”? What is that all about?

I once had a turtle that I’d put on its back, leave, and then come back 30 minutes later to find that it was no longer on its back.

Someone let me know when the otter drops a mixtape, starts a Twitter beef, and then leaks his own compromising photos.
— Rembert Browne

This thing is better than Sasha Pavlovic.
— Brett Koremenos