Only in Dreams: Rosol Upsets Nadal 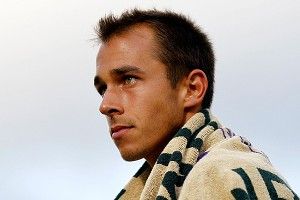 Even if Wimbledon, as Brian Phillips proved, weren’t a dream inside of a big skull, then Lukas Rosol would still be the man of my dreams, or the man in my dreams, or whatever preposition dream grammar requires. I watched his match against Rafael Nadal after 40 hours without sleep; after taking a seven-hour train ride across northern Europe and spending the night outside an airport McDonald’s; after riding a plane from Amsterdam to fevered California; after he had already won, 6-7 (9), 6-4, 6-4, 2-6, 6-4, on Thursday. I could see from the start, therefore, that Rosol was a tall and dashing slayer, and not simply Nadal’s second-round opponent, more gristle than meat, with cheap advertising patches on his shirt that hadn’t been properly attached. I could also see from the start that Nadal was toast.

Funny things happen in fever dreams. This one produced a monster of amalgamated tics and strengths. As Tennis.com’s Steve Tignor tweeted, Rosol was “a compilation of Nadal beaters today: Blasted like del Potro; didn’t back down, like Sod; played fast, like Dodig.” Why stop there? He swung and swayed before his returns with the freaky freneticism of Marion Bartoli. He hit fearless shots on big points, like Novak Djokovic. In the fifth, he stared down his opponent with the superior air of Serena Williams. He even reminded me of Andy Murray, if Andy Murray hit penetrating forehands and played with unrelenting resolve. (So, on second thought, not at all. But they’re both thin and tall?)

Dreams don’t have narratives, at least not normal ones. I never wondered whether Rosol could keep it up. In a dream, the past doesn’t bear on the future. The commentators kept asking when his level would drop. How silly of them.

I highly suggest that you, too, replay the match. You can watch it right now, on espn3.com. Do it. You’ll be released from following the typical story line of an upset — the shifting alliances; the certainty that Rosol’s stunning play can’t last. It can. You’ll be open to all kinds of weird things, because weird things happen when you’re dreaming: Rosol hitting returns from inside the baseline; Nadal not even trying to reach Rosol’s forehand winners …

The difference between 30-15 and 15-30 might not seem like much, but this point was huge. If Rosol goes down, then Nadal has a tiny opening. Blood is blood, and Nadal is a shark.

Rosol had just double faulted. Now he serves another fault. Not even close. Rosol has missed three serves in a row. Second serve is right in Nadal’s strike zone, and Nadal sends back a deep backhand. Rosol takes a huge cut with his forehand. His ball looks clearly long. But he doesn’t wait a second to challenge the call. His finger flies up. And then he smiles.

In fact, the ball had just nipped the line. It could not have been closer. When they replay the point, Rosol hits a service winner. He quickly finishes the hold. If Nadal had broken Rosol in that game, then he would have leveled the match and regained his footing. At that point, you would have to assume Nadal has the advantage. You might as well hand the Czech his souvenir Wimbledon towel, congratulate him on a nice effort, and wish him luck back on the challenger circuit.

When Rosol challenged the call — when it became clear that he knew exactly where his forehand had landed — and when he smiled, then I knew that what I already knew — that Rosol had won, had beaten Nadal, had played the match of his dreams — was true. Sure, there were still two tremendous sets left to play. But Rosol wasn’t just confident. He wasn’t dreaming, despite what he said afterward. He was wide awake.

About Last Weekend: Tiger Roars Past the Bear