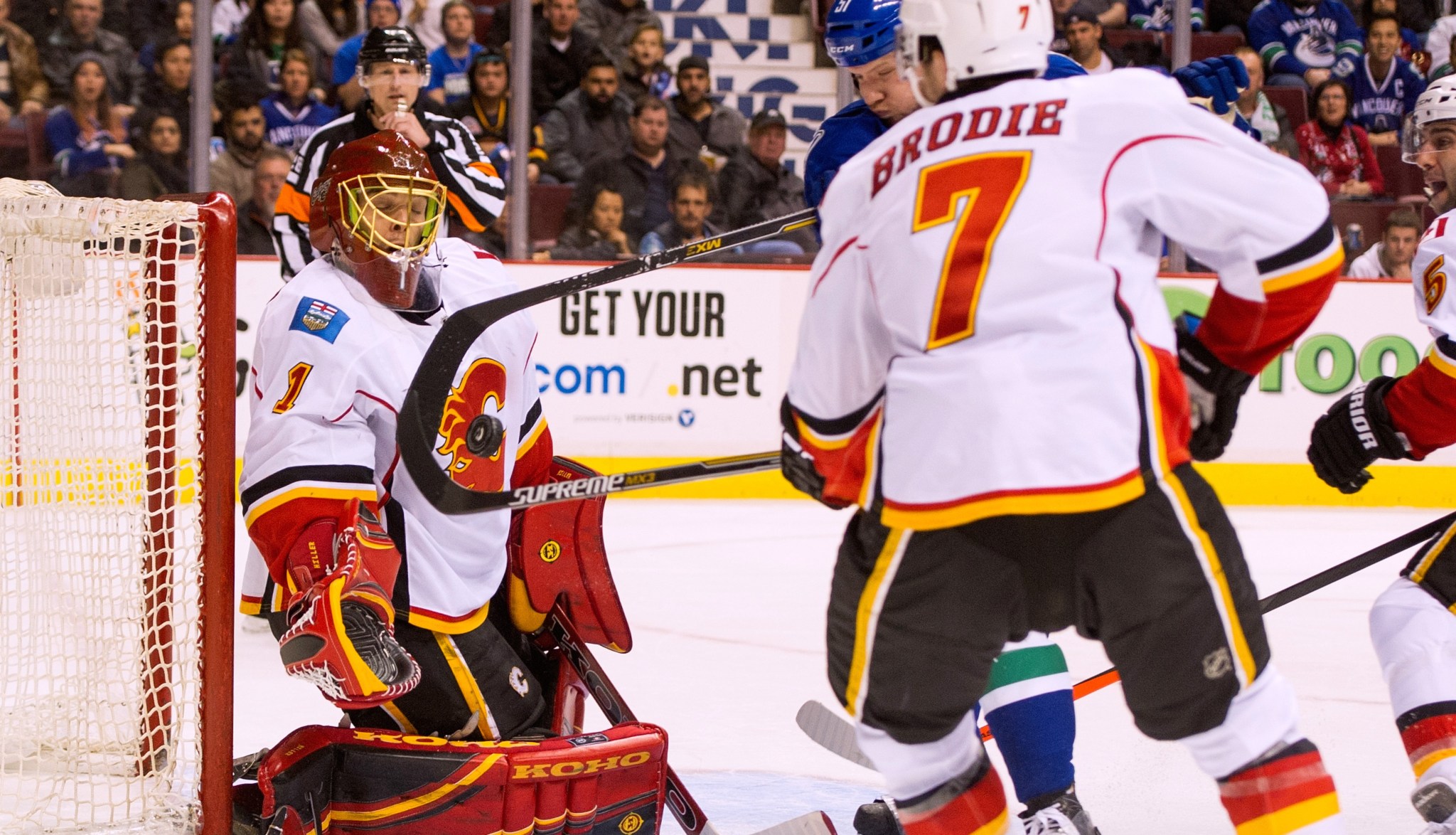 Theme of the Week: The Fall of the Flames

On December 4, the Flames beat the Avalanche in overtime. It was their fourth straight win and moved them to 17-8-2, good for 36 points and leaving them just one back of the Ducks and Canucks for first place in the Western Conference. The roster was basically Mark Giordano, a bunch of kids, and some replacement-level spare parts, but they worked hard and never quit, and somehow they just kept winning.

That was the narrative, at least, and if you were the sort who likes to attribute success to intangibles like leadership, culture, and compete level, the whole thing was irresistible. But anyone who pays any attention to underlying numbers could see the Calgary correction on the horizon; just about every warning light on the Flames’ dashboard was flashing bright red and had been for some time. We flagged their high PDO a few weeks ago, when they were shooting the lights out percentage-wise, and their possession numbers have consistently been awful. The stats guys saw what was coming. The fan blogs saw what was coming. The league’s own website saw what was coming.

And since that win over the Avs, the inevitable has arrived. The Flames have lost eight straight, dropped all the way out of a playoff spot, and are now scoring into their own net. And all of that advance warning hasn’t made it any less painful for fans, both of the Flames and of great stories. It was fun to imagine that a team like Calgary really could overachieve on sheer strength of character and hard work. After all, the franchise has largely been a nonfactor for the last decade, victims of thin rosters and shortsighted management. Nobody likes to be wrong about a team, but in this case it sure would have been fun to see the Flames continue to defy expectations.

Can they get back on track? They sure seem to think so; just a few days ago, they gave coach Bob Hartley an extension, at least partly based on their early-season success. And with 47 games to go, there’s still plenty of time to make up lost ground, especially if they can improve their possession game and stop relying on unsustainable percentages.

If not, at least the kids who make up so much of this rebuilding roster can say they’ve had a small taste of winning hockey. That’s not Connor McDavid, but it’s something.

4. Anaheim Ducks (22-8-5, plus-5): A pair of weak efforts resulted in 6-2 losses to both of the Ontario teams last week, but they’ve built up enough of a cushion that they’re still alone in first place overall.

3. St. Louis Blues (21-9-3, plus-19): Jake Allen stole them a point on Saturday in San Jose. They may need more of that from him, since the Martin Brodeur experiment isn’t looking good.

2. Pittsburgh Penguins (22-6-4, plus-30): They’re playing great, with points in seven straight, and yet they can’t put any serious distance between themselves and those upstart Islanders.

1. Chicago Blackhawks (23-9-2, plus-39): They faced the floundering Maple Leafs squad last night, so you can probably guess how that ended up. (With Antti Raanta’s third career shutout, as it turns out.)

We mentioned the Flames’ lousy possession numbers, which helped serve as a preview of their current collapse. Possession at the team level is among the best predictors of future success we have, which makes those figures worth checking in on from time to time to gauge which of the top-ranked teams are likely to actually stay there. For this week’s top five, the results are surprisingly mixed.

Based on even-strength Corsi, the Blackhawks are for real — they lead the league in that category.1 But the rest of our group is on shaky ground, with the Islanders being the only other team in the top 10, ranking ninth. The Penguins sit 12th, the Ducks are 15th, and the Blues are 16th.

That doesn’t mean we should expect our current top five to collapse — other factors, especially goaltending and special teams, still play a key role in team success. But fans of those teams should be at least a little nervous and keeping an eye out for teams like the Lightning (second), Kings (third), Wings (fourth) and Predators (fifth).

5. New Jersey Devils (12-17-6, minus-25): Even in the Metro, it’s hard to make up ground without a win streak, and the Devils haven’t won back-to-back games since mid-November.

3. Buffalo Sabres (13-18-3, minus-43): They followed a four-game win streak with back-to-back 5-1 losses and then lost to the Bruins last night in overtime. Whew. We were getting worried there, guys!

2. Carolina Hurricanes (9-20-4, minus-24): After dropping a weekend pair to the Rangers, they’ve won one of their last nine and are staying well within range of the Oilers for dead last.

We looked at possession for the good teams, so let’s do the same for the bottom-dwellers. There are some surprises here, too, especially among our bottom two teams. The Oilers are actually sitting at an almost respectable 49.8 percent, good for 20th overall, and the Hurricanes are even better at 14th. That would indicate that both teams should be better than their record, but it’s not especially hard to figure out what’s going on — it’s the goaltending, with the Canes and Oilers among the league’s worst teams at even-strength save percentage.

Both the Devils and Coyotes are in the bottom 10 in possession, sharing space with other occasional Connor Watch teams like the Flyers, Avalanche, and Blue Jackets. And the Sabres are last in the league by a wide margin — their 37.7 percent is well back of the 29th-best Avs at 44.9 percent. That puts Buffalo on pace to post the worst possession numbers we’ve ever seen in the advanced stats era, and it’s why we should hesitate before we go too far with all of those Sabres redemption stories.

• There was a very scary moment in Saturday’s Flames/Canucks game, as Vancouver’s Jannik Hansen collapsed on the bench after a collision. The team later announced he was OK.

• The Stars are finally heating up, winning four straight to add at least a little dose of optimism to their fading playoff hopes. Tyler Seguin leads the league with 25 goals.

• Another early-season disappointment, the San Jose Sharks, is now among the league’s hottest teams, winning five straight and nine out of 10 after edging the Blues in overtime Saturday.

• The league’s longest win steak belongs to the Rangers, who’ve won six straight (although four of those have come against struggling foes like the Oilers, Flames, and Hurricanes).

• Goal of the weekend goes to this solo effort from Alexander Ovechkin. The Caps beat the Devils 4-0 and are tied with the Rangers for third in the Metro. Those two teams meet tomorrow.

• The Penguins and Panthers played a game with some surprisingly bad blood, highlighted by Florida captain Willie Mitchell executing the rare helmet slap on Kris Letang. The Penguins won 3-1.

• The Canucks earned a desperately needed win over the Flames on Saturday, snapping a five-game losing streak that dropped the one-time division leader down to wild-card territory.

• Finally, the weekend’s best story: Philadelphia backup goalie Rob Zepp, a 33-year-old veteran, made his NHL debut last night. Zepp was a Thrashers draft pick in 1999 but never made it out of the minors, and he has spent the last decade bouncing around Europe. He returned to North America this year and earned a minor league job with the Flyers, then got the call-up after starter Steve Mason was hurt. Last night he made his first career NHL start, playing reasonably well in a 4-3 overtime win.