NHL Viewing Guide: Can the Blackhawks Keep Their Streak Alive? 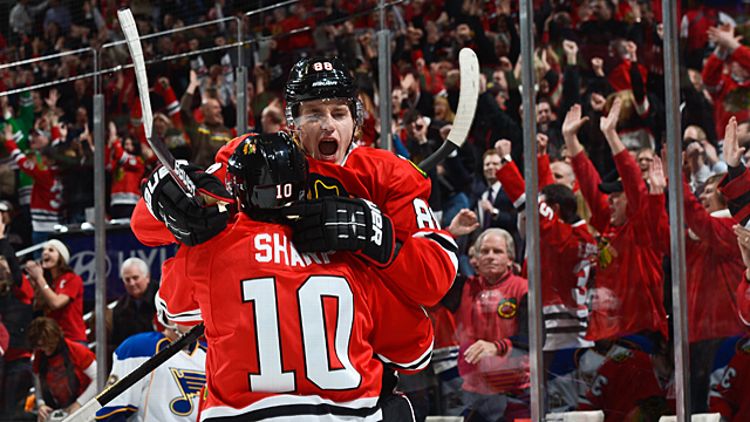 There are umpteen NHL games going on, and it’s always hard to know how to allocate your attention. Here’s our recommendation for the most interesting of the week’s matchups.

Colorado Avalanche at Chicago Blackhawks
Wednesday, 8 p.m. ET
NBCSN
Welp, here’s when you know we might be reaching Peak Nonpointlessness Streak: SportsCenter is sending a reporter — please be Stephen A. — to Tuesday night’s Blackhawks-Wild game, as Chicago looks to continue its historic run. What I like most about this particular streak is that theoretically, a team could come along next year with an 0-0-23 start and wipe the record book clean. I kid, I kid — stop looking at me with those Toews Death Stare masks! Here’s something that genuinely is kind of amazing about what the Blackhawks have done, though: All three of their extra-time losses have come in shootouts, not during overtime. Seven times, they’ve come out of overtime or a shootout with a win — including Sunday, when their win over the Red Wings came with this peacocky Patrick Kane make:


Speaking of peacocks, NBC Sports has to be crossing all its fingers and toes for the Hawks to keep rolling against Minnesota tonight — Chicago is scheduled to play in the national network’s featured game Wednesday against Colorado, and there’s no doubt they want to exploit the ratings goodness any way they can. Colorado has continued to struggle, most recently losing a total stinker to the last-place Columbus Blue Jackets, but there is hope that with Ryan O’Reilly back, the team can start to pull itself together.

(I wonder if it was weird for O’Reilly to play his first game back against a team that potentially could have ended up with him after a total disaster of an offer sheet from Calgary might have left him subject to waivers. I’m still devastated all that didn’t go down, by the way. The resulting fallout would have been top-notch, dragging on for months and reaching the Supreme Court. It would be hockey’s Bush-Gore! Alas.)

Pittsburgh Penguins at Philadelphia Flyers
Thursday, 7 p.m. ET
NHL Network/CSN/ROOT
This is an important week for the Flyers, who have spent the last month flirting with .500 hockey but now face the start of a brutal March stretch that includes two games each against the Rangers, Bruins, Devils, and Penguins — not to mention an always-entertaining Tampa Bay showdown. Philadelphia sits just above New York in the Eastern Conference standings, but the Rangers have played three fewer games, making it effectively one of those “four-point” matchups that we all love to go on about. (The good news for Philadelphia is that its shooting ought to improve from here.) It will be interesting to see if the Rangers, still reeling from the hard-to-watch hit that Buffalo’s Patrick Kaleta put on Brad Richards on Sunday (John Tortorella called it “disgusting”; Richards called it “not hockey”; Kaleta said “I just play hard” and was suspended for five games), will be looking to “send messages” more so than usual in this bruising rivalry. Anyway, after all that, the Flyers get to face a Penguins team that has been doing some ridiculous things lately.

(As a Rangers radio listener I could not be more pleased by the use of Kenny Albert by NBC Sports, though it’s jarring to hear him with Pierre McGuire — the “whoop whoop,” I meannnnn — instead of everyone’s folksy best pal, Dave Maloney.)

Toronto Maple Leafs at Boston Bruins
Thursday, 7 p.m. ET
TSN/NESN
The nice thing about this one is that there’s no telling what might go down. You could probably convince me the Bruins won by a default after the game was overrun by local escaped convicts and only Milan Lucic and Zdeno Chara were left standing. You could tell me the Maple Leafs put up a shutout or that they gave up 17 goals, and I’d do the Robert De Niro smile-frown “seems about right” face. I can 100 percent picture a fight in the press box.