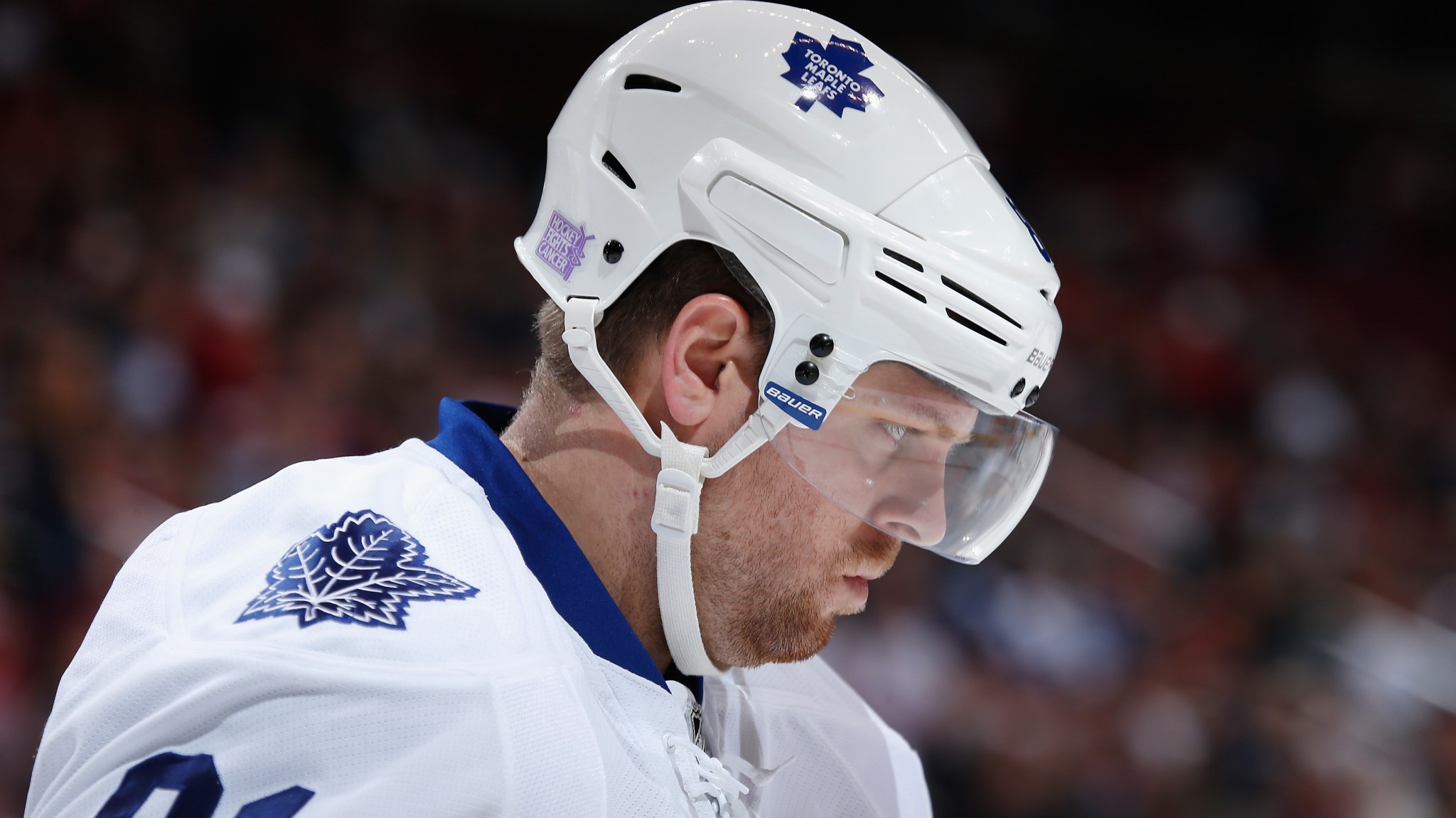 Anyone can be a pest on the ice. Only the truly gifted keep it up on social media.

Hey, the Hart wants what it wants.

The second star: The Canucks autograph a toddler

No, not sign an autograph for a toddler. They passed around and autographed an actual child. The occasion marked the first time the Canucks had signed somebody 3 feet tall since Cliff Ronning.

That’s a great line, but remember who you’re dealing with, Bob. Tread carefully, and hold on to your shoes.

The issue: After an embarrassing loss to the Sabres1, Phil Kessel rudely refused to speak to the local media.

The outrage: Phil Kessel is a weak-kneed coward who shirks his moral duty to speak to reporters and/or the media are pompous blowhards who can’t handle rejection and don’t ask good questions anyway.

Is it justified: This issue has been covered to death; you can find some smart takes on the Kessel situation here and here, and we even took a run at the whole idea of athletes stiffing the media in a previous Grab Bag. At this point, the ground is well-worn: Athletes have an obligation to talk and it’s inconsiderate when they don’t hold up their end of the bargain, but journalists tend to make way too big a deal out of the snubs when they happen and most fans don’t really seem to care. That pretty much covers it, and most of the time everyone involved in these things comes out looking bad.

But when this all comes up again — and it will — I’d like to offer up a proposal for one minor rule of engagement, just for my own sanity: You can’t attack players for not facing questions if you’re also the sort of person who goes on Twitter and blocks everyone who so much as criticizes with you. That’s a fair deal, right? If the players have to be accountable and face the music, then you do, too. You don’t get to do the whole “well, well, well, looks like the block button is getting a workout today, sure feels good!” routine and then turn around and call Phil Kessel thin-skinned.

If we all followed this rule … well, nothing would really change. But it would make me feel better about the whole thing. And really, isn’t that what counts?

[Immediately blocks anyone who says that’s not what counts.]

When Dominik Hasek was inducted into the Hockey Hall of Fame this week, it retroactively created a pair of historical rarities. Two teams from the early ’90s can now lay claim to having once had two future HOF goalies on the roster at the same time: the Blackhawks (Hasek and Ed Belfour) and Sabres (Hasek and Grant Fuhr). That kind of pairing isn’t unheard of, but you don’t see it very often.

So for today’s obscure player, let’s honor a guy who had the privilege of being the third wheel behind two future legends: former Blackhawks backup Jimmy Waite, who helped Hasek back up Belfour in Chicago from 1990 to 1992.

Waite was a fairly well-regarded prospect who once started for Canada at the World Juniors. The Blackhawks took him with the eighth overall pick of the 1987 draft, and he made his NHL debut just two years later. But despite his pedigree, he never broke through as a big league starter (being stuck behind Belfour and Hasek early on didn’t help). He appeared in 11 NHL seasons with the Hawks, Sharks, and Coyotes, but never played more than 20 games in any one year.

There are two things I remember about Waite. First, his full name is James Dean Waite, which I always thought was kind of cool. And second, he once decided it would be a good idea to smash his stick over Brendan Shanahan’s head. That turned out to not be a good idea. I guess by that point, Waite had a thing against future Hall of Famers. Hard to blame him, really.

Hopefully, he’s now teaching the next generation of Blackhawks not to crack skulls. This summer, he was named the team’s goaltending coach.

This week’s trivial annoyance is hockey PA announcers who insist on dropping the word “your” into any mention of the home team. “Please welcome your Florida Panthers!” “The first star, from your Columbus Blue Jackets … ” That sort of thing.

I live in Ottawa, and they’ve been doing the “your” thing here for years. I always assumed it was a passive-aggressive defense mechanism against the building being taken over by Leafs and Canadiens fans a few times a month, but in recent years I’ve noticed that it happens in other arenas, too. They even did it in Toronto during the Hall of Fame ceremony last week.

I hate to be the one to break it to you, Mr. PA Announcer, but we know which one is the home team. I promise you, there is nobody in the arena who’s looking around all confused and asking, “Wait, is that us?” Even if you somehow wound up at a game despite not following the NHL or even having heard of the sport, the name of the city is built right into the team name. We just spent hundreds of dollars on tickets that will go into the pockets of team owners who’ve repeatedly demonstrated that they hold us in contempt, so clearly we’re all dumb. But we’re not that dumb.

Stop saying “your,” NHL public address announcers. Or at the very least, start using those defective referee microphones that cut out half the words, and it will all come out in the wash.

On Tuesday, the Maple Leafs lost to the Nashville Predators at home by a final score of 9-2. At one point the score was 8-0, and Leafs fans were tossing things onto the ice. Needless to say, the organization did not appreciate that.

But the whole scenario may have felt vaguely familiar to old-school Leafs fans, because it’s happened before — and the last time Toronto fans littered the ice while the team was trailing 8-0, it was even during the playoffs.

• It’s April 10, 1988, and the Maple Leafs are hosting the Detroit Red Wings in Game 4 of the Norris Division semifinals. Despite missing injured superstar Steve Yzerman, the Wings lead the series 2-1. We join the action late in the third period with the Wings up 8-0, meaning that Toronto is about to find itself one game away from being eliminated from the playoffs.

• (I’ll pause here so that younger Leafs fans can Google “what is playoffs?”)

• Our very first shot is of Bob Probert sitting between Petr Klima’s helmet and Mel Bridgman’s mustache, which is pretty much the most mid-’80s Red Wings image that’s even possible.

• Detroit head coach Jacques Demers is having a conversation with assistant Colin Campbell, who is apparently earning extra money by working as a Time-Life operation. They’re interrupted by the crowd, which has decided that now would be a good time to show its displeasure.

• And here come the pucks! And jerseys! And Brophy’s Boys hats! Yes, the Leafs gave away souvenirs modeled after coach John Brophy’s legendary black derby. Why? Because John Brophy was 300 shades of awesome, that’s why. Here he is trying to murder his own players. You want to tell him his hat is out of style?

• Well, no wonder the Red Wings are winning, they have Youngblood in the lineup! Or maybe that’s Adam Oates. It was hard to tell for a few years there.

• By the way, kudos to the Wings for playing so well in this game despite their bench being apparently six inches high.

• “The only thing they haven’t done is throw them out while the play is on,” says Harry Neale. Well, sure, nobody would be that stupid. Well, except the guy in Toronto who did that on Tuesday. Don’t do that, fans. Remember, the only person who’s allowed to send garbage onto the ice during play is whichever coach is handling the Maple Leafs’ line changes.

• At this point we skip ahead a few minutes, as the two teams play out the string. Wings goalie Glen Hanlon takes a slap shot to the collarbone and is temporarily down and out. Neale blames the injury on the tiny shoulder pads goalies wear. Somewhere, a 10-year-old J.S. Giguere has a brilliant idea.

• Now we skip ahead again, this time to the end of the game. I like how Hanlon just leaves as soon as the horn sounds. No celebration, no congratulations from teammates. He just turns and bolts. Maybe he wants to ask the dude in the front row behind him if he can buy his sunglasses.

• Among the many things I miss about the 1980s: those plastic horns that you could bring to sporting events. Wait, did they have those in America? I feel like it may have been a CFL thing that spread to hockey. In any case, those horns were great, especially since Maple Leafs fans at this game have somehow figured out how to blow them sarcastically.

• “Sometimes the score does not reflect the difference in play, and tonight’s a good example of that. It was worse.” Harry Neale was the best.

• If you watch carefully as Demers leaves the ice, you can see somebody whip what appears to be a tennis ball at his head. Those old-school Leafs fans, always planning ahead with their projectiles. Not like the lazy kids today with their waffles.

• The three stars are, not surprisingly, all Red Wings. They’re also all future NHL coaches, which seems kind of weird, but you can learn a lot from being in the same building as John Brophy.

• “Ken Wregget wasn’t the only one not saving pucks.” Ron MacLean was basically the king of hockey Twitter one-liners before there was such a thing as Twitter.

The Leafs actually went into Detroit and won Game 5 before dropping the series in six. The Wings went to the conference finals, before losing to the Oilers in a series that was memorable for ending badly for the organization.

The Maple Leafs vowed that they would never again face this kind of humiliation in front of 16,000 irate hometown fans, and so they built a bigger arena.

Have a question for Sean? Want to suggest an obscure player or a classic YouTube clip? Send all of your Grab Bag–related emails to nhlgrabbag@gmail.com.

Welcome to the Week 12 Thunderdome