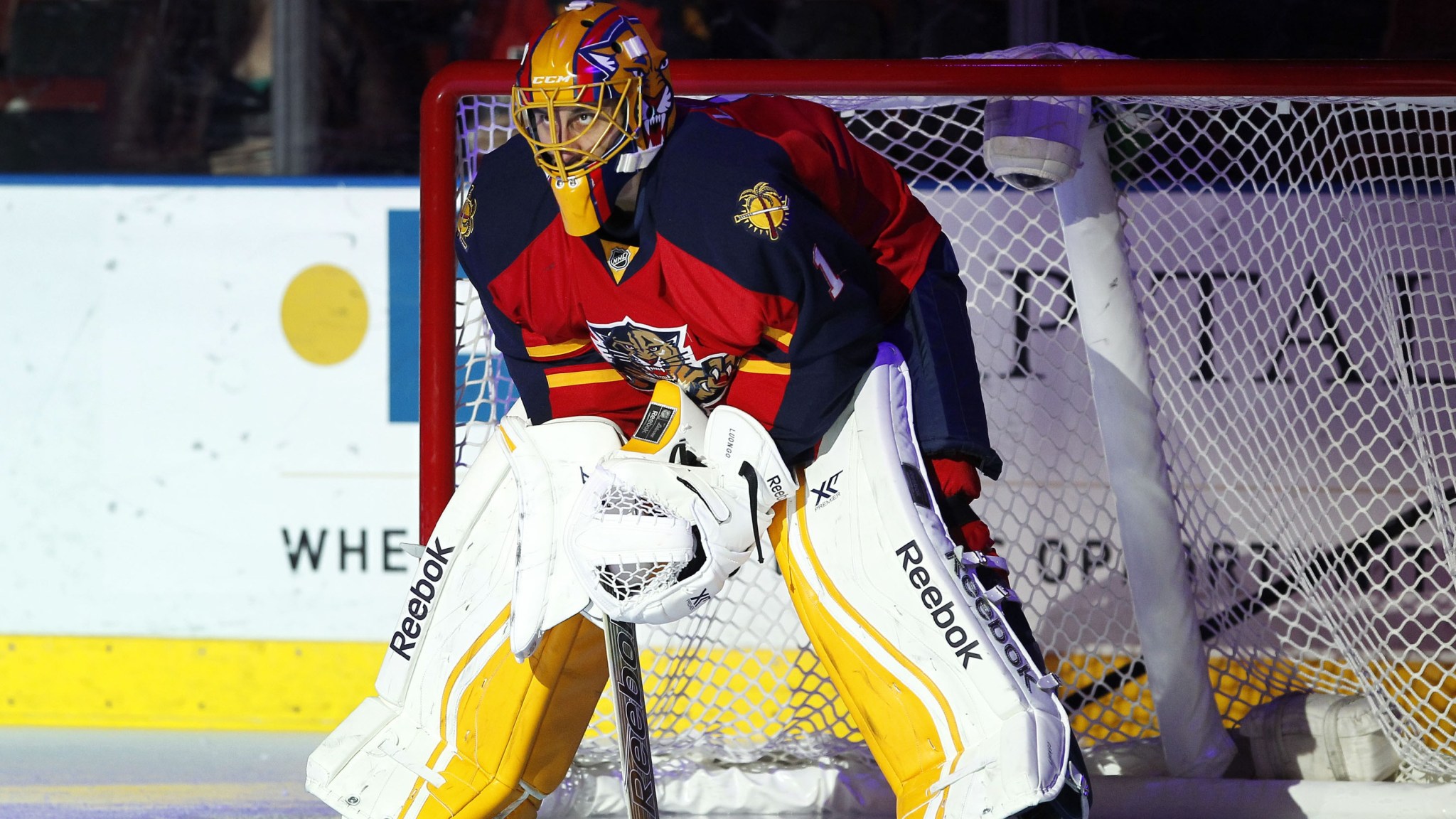 Trade deadline day can get a little weird in Canada.

The second star: Sergei Gonchar and Olli Jokinen are too old for this

You have to give them credit for honesty. I hear that was an important value when they were growing up in the 1800s.

Next day reality? 1st guy walked off! 2nd guy limped off! 3rd guy would have been carried off!

And if you’re not sure who Tallas is, meet me in the next section.

This week’s obscure player is Jerry Toppazzini, a winger from the ’50s and ’60s who played for Boston, Chicago and Detroit, and once held the record for shorthanded goals in a season. He was also the last non-goaltender to play net in the NHL, and holy crap we came this close to having another one this week.

Since 1965, the NHL has required all teams to have two goaltenders dressed for each game. You’d have to think that at some point, somewhere, both guys would get hurt in the same game. And in the 50 years since, there have been a handful of cases in which that happened, but the team involved always had a third goaltender available.

But Tuesday night, the Florida Panthers found themselves facing a nightmare scenario that, amazingly, had literally never come to pass before in NHL history: both goalies hurt, and no active goalies available to take their place.

The game was against Toronto, because Lord forbid anything ridiculous happen these days that doesn’t involve the Maple Leafs. Roberto Luongo hurt his shoulder in the first and was taken to hospital for tests. Backup Al Montoya hurt something early in the third, and didn’t seem able to continue. The result was a surreal scene, as the Panthers scrambled to find somebody to play. Goalie coach Robbie Tallas quickly suited up and took a spot on the bench, but didn’t go in.1 A forward, Derek MacKenzie, also started putting on the gear. Montoya stayed in the game, but could barely move. Once it became clear he had to come out, the Panthers reportedly considered playing the rest of the game — one that was crucial to their playoff hopes — without any goalie at all. It was absolute, unfettered, wonderful chaos.

And then Roberto Luongo ruined everything by making a heroic return and finishing the game. Nobody will ever forgive him. Except for Jerry Toppazzini, whose unique claim to fame lives on.

The issue: During TSN’s trade deadline coverage, former NHL coach Ron Wilson told a story about being ordered to lose games by his GM for tanking purposes.

The outrage: But wait, we’ve all been repeatedly assured that tanking never happens.

Is it justified? Obviously not, since Wilson was just confirming what everyone has always known: Of course organizations tank for better draft picks. And it’s worth pointing out that Wilson made it clear that he kept the plan from his players, because again, players don’t tank. But GMs do, and now we know that coaches do, too, at least occasionally.

The fun part about Wilson’s story was that he meant to keep everything anonymous, but left enough hints that it sure seemed to point to the 1998-99 Capitals. That team had gone to the final the previous year, but was suffering through a rough season and had fallen out of the playoff race, going 2-11 down the stretch. George McPhee was the GM.

And the best part is that the player they (allegedly) tanked for ended up being: last week’s Obscure Player of the Week, Kris Beech! What a big week for Kris Beech media coverage. I say we keep it going. Hey, you know how Maple Leafs captain Dion Phaneuf is under fire this week? Here’s Kris Beech trucking him.

(Be right back, going to pitch Kris Beech Week to the Grantland editors.)

This week, some Sharks fans showed up at a game looking like this:

Some #SJSharks fans in the SAP center parking lot before the game. pic.twitter.com/jBnkBf56q6

Now, we could question whether fans of a team that’s been good for two decades and is still in the playoff hunt have the right to do the whole “bag on the head” routine, but we’ll save that for another day.

Instead, let’s tackle a bigger issue: Hockey fans, we all understand what a paper bag over the head means. You do not need to supplement the bag with helpful labels like “Upset Fan.”

And I direct that to hockey fans in general, because amazingly, this is not the first time this issue has come up. Why are fans doing this? It’s basically the equivalent of standing up during the game, yelling “BOOOOOOOO!” and then turning to those around you and adding, “I am unhappy with how the team is playing right now.”

You showed up at a sporting event with a bag over your head. We already understand you’re upset. It’s pretty much a universal symbol. I promise you, none of your fellow fans were going, “Wait, why does that guy have a … [reads text] … oh, now I get it. That was very helpful.”

You’re not Shia LaBeouf, hockey fans, and nobody is mistaking you for the Unknown Comic. We get it. Just the bag will do fine.

Before we get to this week’s clip, I wanted to follow up on last week’s mention of John Cullen and his neck guard, which I was worried I’d imagined. First of all, no, I was not confusing John Cullen with Joe Mullen; I might not remember which one of my kids is the one with the severe peanut allergy, but I would never confuse a pair of early-’90s NHL forwards. And second, I was right! Sort of. Cullen did wear a neck guard for stretches of his career, although not all the time. Photo evidence can be found here.

Back to our regularly scheduled programming.

This week, much of the talk has been about tanking, and whether certain teams are intentionally trying to lose so that they have a better shot of drafting first. Of course, nothing is guaranteed, because the league has a draft lottery. And the reason it does is that, back in 1993, an NHL team actually admitted to (but then later denied) intentionally losing its last game to get the top pick.

That would be the Ottawa Senators, and the big prize that year was a can’t-miss prospect named Alexandre Daigle. And, in what could serve as a cautionary example for some of this year’s tanking teams, it didn’t work out so well.

• It’s June 26, 1993, and we’re coming to you from the Colisée in Quebec City. The NHL entry draft has just started, and the Senators are on the clock with the no. 1 overall pick. No doubt this will go well.

• Here’s Ottawa GM Randy Sexton — and yes, that is his real name — getting ready to make the pick. He’s going to take a while because this is in Quebec, which means he’s legally obligated to try to speak French.

• While we wait, let’s take a moment to enjoy the tie on the guy behind Daigle. It appears to have people on it. I’m guessing he picked it out while thinking, Ah, who cares, I’m sure I won’t be on national TV at any point today.

• Daigle does a decent job of acting surprised and starts hugging his family, which apparently consists of his parents, a few siblings, and a giant silver post that I guess we’re going to pretend is not out of place at all.

• Yes, we all hear you, Annoying Whistle Guy.

• We get a look at Daigle’s numbers on a screen that’s apparently brought to us by Apple. The company would later use Daigle’s career as the model for one of its most popular products, the iPhone It In.

• “What kind of player is Alexandre Daigle?” asks our analyst, whose name I won’t reveal because I like him and feel a duty to protect his identity. “Part Pat LaFontaine” is the first answer. Well, OK, obviously Daigle didn’t end up matching LaFontaine’s career, but that’s not a terrible comparison. Could have been worse, right? Oh wait, we’re not done.

• “But he’s also got the fire in his eyes like Rocket Richard … ” The brakes don’t work! We’re careening out of control! Open the door and dive out of the car — it’s our only hope!

• (Don’t worry if you hurt yourself doing that. I’m sure there’s a nurse nearby.)

• Now we get the usual post-pick interview, in which Daigle thanks his family. Here’s a fun bit of trivia: Notice the kid behind him, fanning himself with his program. That’s actually a 5-year-old Jonathan Toews, who was at the draft to support his cousin, Nolan Pratt. Toews himself, of course, would be drafted 13 years later.

• Daigle pulls on his new Senators jersey, which already has his actual number, 91, instead of the more traditional draft year. Man, the history of players who wore 91 is an interesting list. You’ve got a bunch of future Hall of Famers Like Fedorov, Tavares, Stamkos, and Seguin. You’ve also got Daigle, Montreal-era Scott Gomez, and Edmonton-era-the-second-time Mike Comrie. Not much middle ground there.

• By the way, I made up that part about that kid being Toews. Just wanted to test my “every 5-year-old could pass for a young Jonathan Toews” theory. You were on board, weren’t you? I knew it.

• Our closing shot is of a triumphant Daigle saluting the crowd, then pounding his fist over his heart. We cut away before concerned Senators executives can ask, “Hey, why did that just make a hollow sound?”

Daigle went on to be a disappointment in Ottawa, never coming close to living up to his pre-draft hype. He’s widely considered one of the great draft busts, playing 10 lackluster seasons for six teams. In one of the great-draft-busts deals of all time, he was once traded for Pat Falloon.

The scouts and analysts who thought they were looking at a can’t-miss franchise player weren’t the only ones who made a bad call that day. Moments after being drafted, Daigle infamously told reporters he was happy to be picked first “because no one remembers number two” The no. 2 pick in that year’s draft: Yeah, he turned out to be pretty memorable.

Free-Agent Report Card: Which Teams Made the NFL’s Honor Roll?