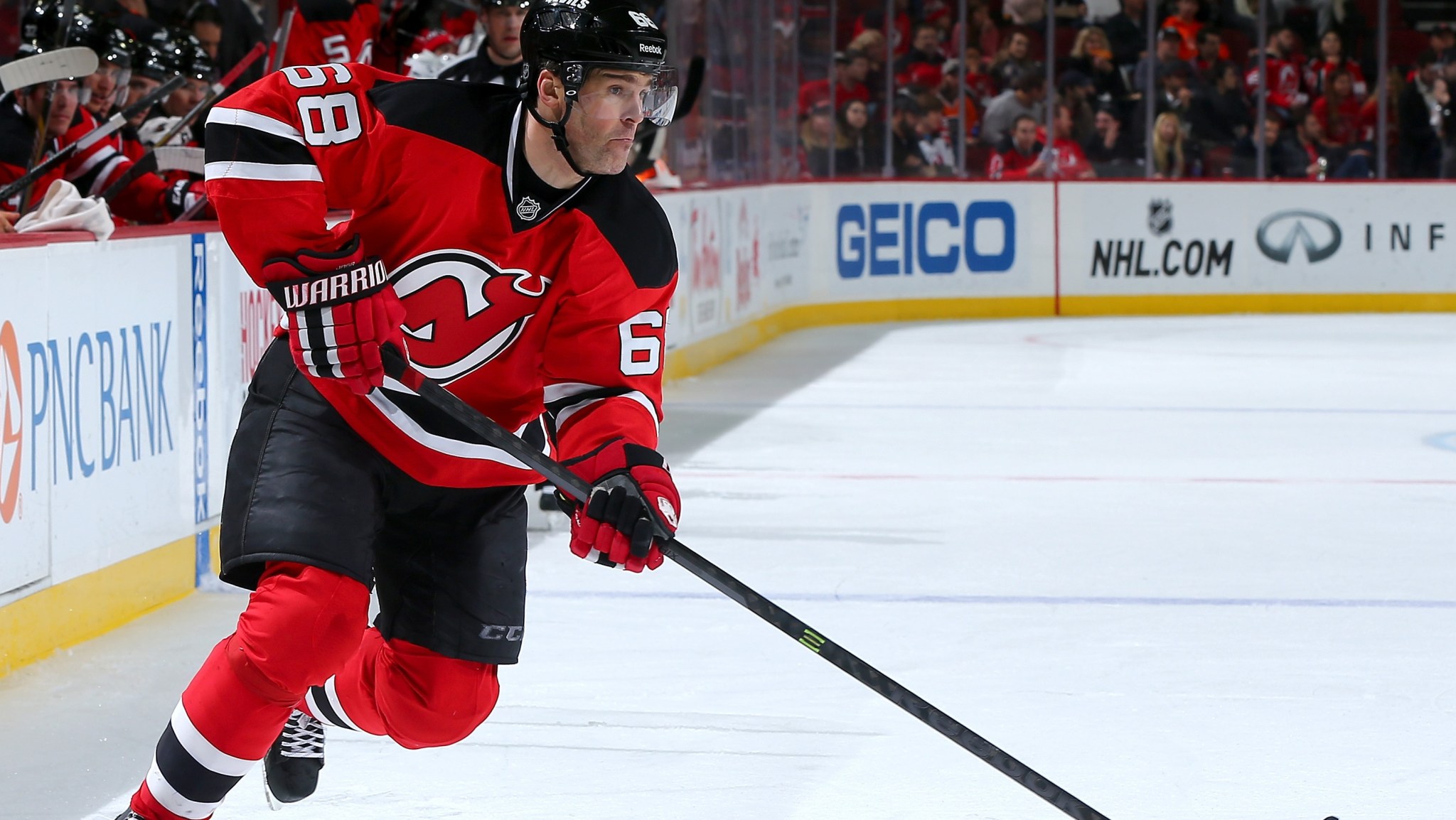 You have to give him credit, this was going pretty well right up until the end.

I’ve done that before. Only without the breakaway part. Or the hockey part. Or the skating part. (I was trying to walk down my driveway two days ago.)

The second star: This kid

She just had her wisdom teeth out, which you would assume would be a process carried out by a doctor. Nope. According to her, Shea Weber sent his minions to do it.

This is the most ridiculous drug-induced Shea Weber fantasy I’ve ever heard that didn’t involve him being traded to the Flyers.

The first star: Whatever is happening here

Your guess is as good as mine. He seems pretty fine with it, though.

Can we hire that guy to bring back the dry scrape before the shootout? Just have him start from center and clear a path before every shot.

Yesterday, the Devils traded Jaromir Jagr. Despite his spectacular résumé, the legendary winger has now played for eight teams and has been traded several times. So this week, let’s look back at the big prize from the very first Jagr trade: Kris Beech.

Jagr was still in his twenties in 2001, when a split from the Penguins became inevitable.1 He was eventually dealt to the Capitals in July in exchange for a trio of prospects: Michal Sivek, Ross Lupaschuk, and former seventh overall pick Kris Beech.

Beech was a big center who’d shown promise in the WHL. But he only went on to play one full season in Pittsburgh, scoring just 25 points. He spent most of the next few years in the minors before being traded to Nashville, and then later back to Washington. Free agency and waivers led him to stops with the Blue Jackets, Canucks, Capitals (again), and finally Pittsburgh (again). He played his last NHL game in 2008 before bouncing around the European leagues. His career NHL totals: 198 games, 25 goals, 67 points.

The rest of the package wasn’t much better; Sivek played 38 NHL games, and Lupaschuk played just three. Not quite what you’re hoping for when you deal a future Hall of Famer.

Did the Devils do any better? Well, Jagr is now 43 years old and about a decade past his prime, and all they could get were a few drafts picks, so … yeah. They definitely did better.

In which we select one quote about capgeek.com and stare at it while a single tear rolls down our cheek.

Earlier this week, NHL commissioner Gary Bettman was once again asked about the league stepping in to create a comprehensive CapGeek replacement. His reply: “It’s not something that seems to be driving fan interest as much as perhaps the interest of the people [in the media] in this room, and your colleagues.” In other words, he doesn’t think fans care about this stuff enough to make it worth the trouble.

Look, we’ve used this space to suggest that the league step in before, but it’s certainly not obligated to do so. But for Bettman to pretend there’s no demand for this stuff is just stunningly disingenuous. He’d have to be stupid to really believe that, and he’s certainly not stupid. So the only other option is that he’s engaging in a comically bad bit of PR spin, acting as if the 100,000-plus fans who followed the CapGeek Twitter account don’t exist.

It’s not hard to see what’s going on here. The league doesn’t want this information out there, because a lot of it is embarrassing to the teams — and especially the GMs — that keep signing terrible contracts. But this isn’t some trivial thing. It’s not like we’re talking about a site that tracks uniform colors or player nicknames. In a salary-cap world, NHL fans need to know who makes what, and under what terms. You can’t have an intelligent discussion about a roster move without that information.

If the league won’t build a new CapGeek, somebody else eventually will.2 If this is anything like the advanced stats story, the league will sit idly by for years and then jump in with a poorly received offering. That’s fine. Hockey gods forbid this league is ever out ahead of something.

Just don’t insult us in the process. Pretending that hockey fans don’t want something won’t make it so, Mr. Commissioner, no matter how much your embarrassed GM buddies want to hide the evidence of their screwups.

Canadians love three things: rolling up the rim, making terrible pop music, and freaking out about our Olympic hockey teams.

This week, Canadians had a collective Olympic panic over how to mark the anniversary of last year’s gold-medal game.

You remember that one, right? When Team Canada smothered Sweden in a 3-0 victory, capping off a tournament in which it ran the table? The exclamation point for a tournament in which Canada allowed fewer overall goals than Russia gave up in a single shootout to one dude? The game featuring the Canadian team that’s generally considered the most dominant ever assembled, even though it didn’t even have Steven Stamkos, Joe Thornton, or Claude Giroux? The one that wasn’t even the first Canadian hockey team to win gold that week?

Yeah, that men’s gold-medal game had its one-year anniversary Monday. I mean, how do you celebrate an occasion like that? Street party? Too cold. Cross-country parade? Also too cold. Get out of bed? Way too cold.

In the end we went with politely high-fiving any family members we saw under our blanket fort while drinking Tim Hortons out of a canteen. But yeah, tough week to be a Canadian hockey fan. You Americans sure are lucky you only have this problem once every 35 years or so.

The NHL trade deadline is at 3 p.m. ET Monday, meaning that by 3:01 we’ll all have strong opinions about the winners and losers from all the day’s deals. But sometimes, those early evaluations turn out to be tricky, as several Hartford Whalers fans are about to demonstrate.

• It’s March 9, 1991, and the Whalers are hosting the Penguins. Five days earlier, the two teams had made arguably the biggest trade-deadline deal in hockey history: Ron Francis, Ulf Samuelsson, and Grant Jennings for John Cullen, Jeff Parker, and Zarley Zalapski.

• There’s really no nice way to put this: The trade ended up being one of the most lopsided ever. Francis helped the Penguins win the next two Stanley Cups and racked up big point totals over seven full seasons in Pittsburgh. Samuelsson was probably the second-best player in the deal, one that tore the heart out of a Whalers team that would never win another playoff round and eventually moved to Carolina.

• Of course, we know all that now. At the time, the trade seemed a little more even. And so our hosts Rick Peckham and Gerry Cheevers are going to try to put a happy face on things with an intermission feature in which we get to meet several Whalers fans. Roll the clip.

• First up: Sunglasses Guy. “Too bad for Ron Francis, though.” No, Sunglasses Guy, not really. It’s going to work out pretty OK for him, actually.

• Next up is Whalers Hat Guy, who admits that Francis is a good player, and “it’s too bad we have to lose him, but I guess that’s the way that trades go.” Sure. Some trades go that way. Other times, you can make trades that don’t involve losing the best player in franchise history. Really six of one, half-dozen of the other.

• By the way, we’re two fans into this feature and it’s already clear that Whalers fans hate this deal but are trying to be nice for the TV cameras.

• Rambling Lady just said a bunch of English words that do not work in the order she put them in. It’s too bad she didn’t make any sense, but I guess that’s the way sentences go.

• Seriously, she just said, “It helps us team.” Maybe offer her a second take there, guys?

• “I’ll stick by them as long as I can afford it.” Just wondering, can you afford airfare to Carolina? No reason.

• OK, next up is a guy I can only describe as Dave Foley Doing a Bang-on Impersonation of Gary Bettman. This is a Kids in the Hall sketch, right? This dude is creeping me out. He even does Bettman’s little neck twitch thing. I started booing him just out of force of habit.

• Very Happy Lady is very happy. Other Sunglasses Guy also loves the deal. Both are clearly crisis actors deployed by Whalers ownership to fool fans into thinking this is a good deal. Wake up, sheeple!

• Last up is Turtleneck Lady and Other Turtleneck Lady, neither of whom likes the deal and both of whom are completely adorable. I was going to make a joke here about them liking John Cullen because he always wore a neck guard. Then I went to search for a photo of him wearing one, and there aren’t any. Did I make that up? Did some hypnotist get a hold of me 20 years ago and implant the world’s most obscure false memory? Somebody please back me up on this.

• We throw it back to Gerry and Rick, who desperately try to make the deal sound good while Whalers front office executives stand just off camera, holding a lighter under their contracts.

• Sorry, had to go back and watch Foley/Bettman again. That guy is the undisputed star of this video. We may all have nightmares about him tonight.

• We close with an extended shot of Cullen as Cheevers hilariously damns him with faint praise like “He can play the game” and “He’s a hockey player.” Peckham adds that “you can’t shake a stick at” Cullen, which was technically true, since Ed Kastelic would have immediately pummeled you.

• Our video ends shortly before Cheevers presumably got to “He can tie his own skates” and “His respiratory system converts oxygen into carbon dioxide.”

Cullen lasted just 20 months in Hartford; in November 1992, he was traded to the Maple Leafs for a second-round pick. Parker played only four games as a Whaler. Zalapski lasted the longest, making it through three whole years before he was traded to Calgary.

The good news for Whalers fans is that Francis did eventually return to the franchise in 1998. The bad news is … well, you know. He’s currently the Hurricanes general manager and will be in charge of pulling the trigger on any deals the team makes Monday. If he wants any tips on what not to do, I know a bunch of folks in Hartford who could probably help him out.

‘NBA After Dark’ Podcast: With Royce Young, Plus Tom Krell of How to Dress Well