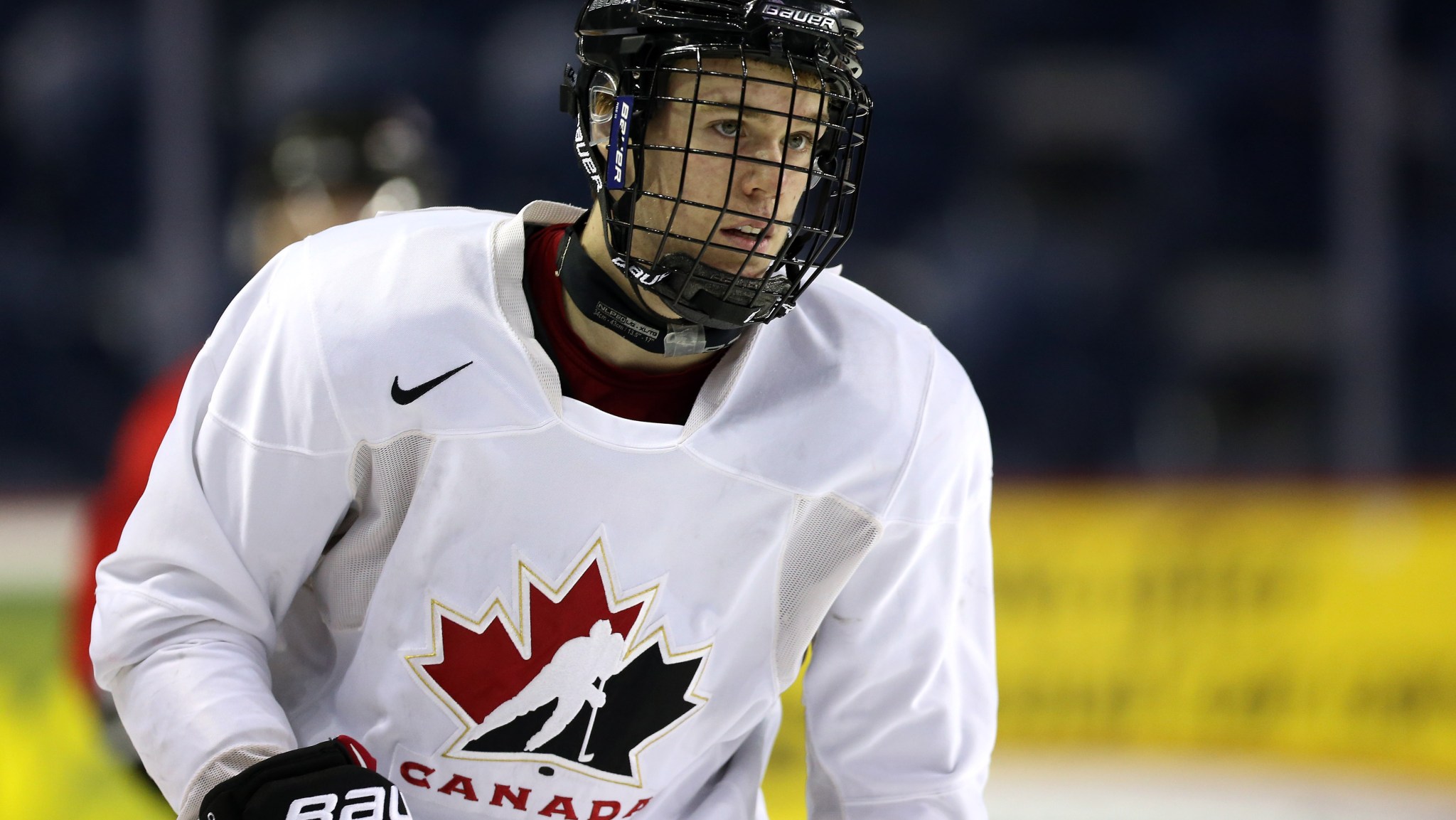 The third star: The mumps song

Everyone in the hockey world has the mumps, including you, so it goes without saying that somebody wrote a parody song about it. Somewhat surprisingly, it’s pretty good. Incredibly surprisingly, it’s not set to the tune of that “Light a Mup Mup Mup” song. Apparently, unlike NHL arena directors, this artist is aware of the existence of other songs.

Last week we shared the team’s ironically awful Christmas rap. This week we’ve got the team watching that video for the first time, featuring the expected mixture of bemusement and outright horror.

I’d absolutely subscribe to a channel that was nothing but Patrick Marleau reacting to things. Somebody make this happen. I’ll even give you the title: “Raised Eyebrows.” You’re welcome.

Kevin Lowe had a tough week. His team is a mess, fans want him fired, and a few days ago Twitter rediscovered the old story about him turning down a Corey Perry–for–Mike Comrie trade.

So I’m hesitant to pile on any further. But I feel like we all need to take a moment to appreciate the glorious madness that is Lowe’s bio on the team website. While the other execs get the standard few paragraphs outlining their related experience and accomplishments, Lowe has a sprawling 2,700-word masterpiece.1

• “Lowe has been instrumental in the renewed success of the team both on and off the ice.” It’s possible this page hasn’t been updated in a while.

• “In recent years, Lowe has been assisting the strategic rebuild of one of the outstanding franchises in the League.” Yeah, definitely not updated in a while.

• Did you know that Lowe was the first draft pick in Oilers’ history? You’re about to, because that fact is mentioned four separate times.

• For some reason, we get detailed breakdowns of random years from Lowe’s playing career, including his scoring stats against every other NHL team, which we can all agree is important information to know about a front-office executive.

• “(T)he Oilers never failed to qualify for the Stanley Cup Playoffs with Lowe in the lineup.” Those last three words end up being kind of an important qualifier.

• The mystery of those eight “unaccounted for” penalty minutes. I sure hope the FBI is looking into this.

• “As GM, he became one of only 40 general managers in the history of the NHL to get his team to the Stanley Cup finals in 2006.” Apparently the Carolina Hurricanes had 39 GMs that year.

• “MOST GOALS, ONE GAME: 1; 84 Times.” That’s definitely the most impressive possible way to say you never scored two goals in a game.

No, not that Taylor Hall. The other one.

The Other Taylor Hall was a sixth-round pick of the Canucks in 1982. He burst out the year after he was drafted, eventually posting 142 points with the Regina St. Pats in 1983-84. He got a cup of coffee with the Canucks that year, and was penciled into the starting lineup for the following season.

On opening night of the 1984-85 season, the Canucks iced a line featuring veteran center Peter McNab between two of the organization’s top prospects: Taylor Hall and Cam Neely. The line was unstoppable early on, posting 16 points in their first four games. But in the seventh game of the season, Hall got tangled up with Gerald Diduck and crashed into the goalpost, blowing out his knee and ending his season. He was never the same player.

Hall’s injury ended the McNab line’s hot streak, and Neely went on to post mediocre numbers before being traded to Boston in 1986. Hall played just 23 more games over two years in Vancouver, before signing with the Bruins to reunite with Neely. He’d play just seven games, the last of his NHL career.

Is there an alternate universe in which Hall doesn’t get hurt, he continues to light it up with Neely on the other wing, and Vancouver never trades the future Hall of Famer to the Bruins? That’s probably too painful for Canucks fans to think about.

As for Hall, fittingly enough, today he’s an Oiler. The Tulsa Oilers of the ECHL, to be specific, where he serves as the team’s GM.

This week, Dallas Eakins became the second coach of the season to be relieved of his duties. We really, really need to stop doing that.

Not firing coaches — using the term “relieved of his duties.” It’s a dumb term, and yet it’s somehow become the go-to phrasing whenever somebody in the sports world loses their job.

Eakins was fired. Pink-slipped. Shown the door. He got sacked. Pick whatever term you want. Just don’t try to dress it up in friendly, nonthreatening language like “relieved of his duties,” a meaningless phrase designed to shield us from the reality of a tough situation.

It’s a cliché, and it’s also silly, because it brings to mind a coach being told he’s out of a job and reacting to the news by shouting, “Gosh, that’s a relief!” Do you think any coach ever says that when he gets fired? No, of course not. Eakins thought it, absolutely, but he wouldn’t have said it out loud. Probably.

NHL coaches get fired. It’s not fun, but it’s part of the job. There’s no need for the rest of us to try to soften the blow with weak, squishy wording. As a wise man once said, try to pay attention to the language we’ve all agreed on.

The World Junior Championships schedule begins Friday with an exhibition game between Canada and Russia. The round robin starts a week from today, with the gold medal game scheduled for January 5. If you didn’t know all of that, you evidently don’t know any Canadians.

This tournament is kind of a big deal up north, where it gets round-the-clock coverage and every roster spot is debated endlessly. Remember how crazy we got during the Olympics? Dial that down by roughly 1 percent, and you’ve got the WJC.

As a Canadian, I want to help my American friends get through this. So here are the 10 rules for talking to a Canadian during the World Junior Championships.

2. Do not try to change the subject. There is no other subject.

3. Under no circumstances point out that no other country pays any attention to this tournament.

4. Say something nice about Connor McDavid.

5. Don’t make that nice thing be “He looks pretty good for a guy with a mangled hand.”

7. When in doubt, say, “Well, if that one guy’s NHL team had let him go, everyone knows you’d win easily.”

8. If things get tense, say the words “John Slaney,” then get ready for a hug.

9. Remember that as soon as Canada is eliminated, the tournament ceases to matter and the Canadian you are talking to will pretend never to have cared in the first place.

We’re less than a week away from Christmas, so if you’re like me, you’re thinking about maybe kind of eventually getting started on your shopping. Luckily for you, I’ve got the perfect gift for everyone on your list. You just need $15.95, and a time machine back to 1983.2

• Meet Doug Harrison. He’s a reported for the CBC, and he’s been assigned to file a story on a new Wayne Gretzky doll. He hates his job very much right now, and for the next few minutes, he’s not going to try very hard to disguise that fact.

• Harrison starts off with an odd pun comparing Gretzky to a Canada goose. This was back when everyone thought Gretzky whined too much. Gee, sure glad we got over the silly fad of saying that about every star player who came along.

• Wait, “Le Magnifique”? Did we actually call Gretzky that at one point, and then just transition the nickname over to Mario Lemieux like nothing happened? That’s almost as bad as Brad Marchand trying to steal “Little Ball of Hate.”

• Next is the investigative portion of the story, as Harrison tries to find out how well the doll is selling. The answer, according to the frazzled store owner: not well. But they’re ready to take off, he assures us. Yup. Any day now …

• Wait, this guy looks familiar. Where have I seen him before? Oh, right.

• Now we get a shot of Gretzky and Barbie, and I have to warn you that Harrison is going to start making awkward jokes about the dolls doing it and it’s going to get vaguely uncomfortable. We’ve got 40 seconds left; just sit tight and we can make it through this.

• There’s a passing reference to Gretzky’s girlfriend, Vicki Moss. That relationship didn’t work out, but there’s a great story to it. Vicki had a brother named Joey, and Gretzky hooked him up with a job as the Oilers’ dressing room attendant. Thirty years later, Joey is still there, a bona fide Oilers legend and perhaps the only member of the entire organization whom nobody hates right now.

• What I’m trying to say is: Joey Moss is the best.

• Wayne Gretzky’s Rocket Hockey was amazing. I’m not even kidding. I knew kids I stayed friends with solely because they owned this game. I don’t know what to tell you; this was life before video games got good.

• “Even the doll can score.” And on that note, Harrison drops the mic, quits his job, and helps the owner burn this toy store to the ground for the insurance money.

I know what you’re wondering: “Can I buy a Wayne Gretzky doll today?” Yes, of course you can. And what you choose to do with it and your Barbie doll is nobody’s business but your own.