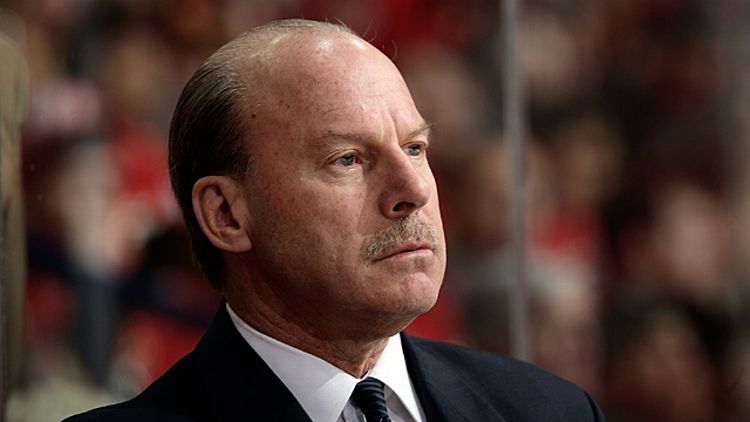 Flyers fourth-liner Zac Rinaldo thinks he can catch Phil Kessel with his head down, which is adorable in much the same way as a child who thinks his cardboard box can fly to the moon. I’m sure Kessel, one of the league’s best skaters, was completely terrified during every shift against Rinaldo that at any moment he could have his head down and then suddenly he would be viciously — oh, no, wait he just scored instead.

The second star: Ryan O’Byrne, joker
Oh, hockey players and their hilarious practical jokes. Like Avalanche defenseman Ryan O’Byrne, who tweeted a photo he claimed was the result of a “blocked shot off the knee,” but was actually clearly a profile shot of a skinny, hairy woman who was pregnant with triplets. Nice try, Ryan!

The first star: Mike Keenan, Twitter troll
The notoriously crusty former coach joined Twitter this week. That wasn’t all that interesting, since plenty of otherwise engaging hockey personalities have tried Twitter and been terrible at it. But Keenan got off to a strong start when, after a few introductions, he tweeted a surprisingly solid dig aimed at Roberto Luongo.

@strombone1 thanks Roberto. I wouldn’t have left you in for all 8 in Detroit.

The joke there is pretty clear — Keenan was notorious for pulling goalies, so the idea of him leaving somebody in for eight goals is ridiculous. But notoriously humorless Canucks fans somehow took the tweet as a shot at Vancouver coach Alain Vigneault, forcing Keenan to explain the joke.

Canuck Fans.. AV and I are friends! Hired him for making the cut. Does a great job! Making fun of myself not him!

From Twitter newbie to antagonizing Canucks fans in four hours. This guy’s a natural. 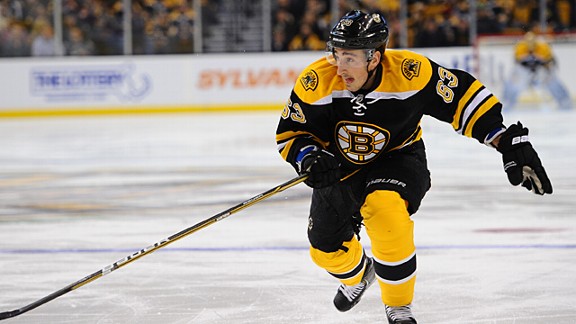 The issue: This has apparently been going on for a while, but I only became aware of it this week: Boston Bruins fans and media have spent the past few years thinking Brad Marchand’s nickname is “The Little Ball of Hate.”

The outrage: That nickname had previously belonged to retired forward Pat Verbeek.

Is it justified: Hey, Bruins fans, lean in to your monitor. Closer. Closer … [Smacks screen with rolled-up newspaper.] No! No! [Shakes newspaper threateningly.] NO!

This is just inexcusable. How can you try to steal “Little Ball of Hate”? It’s not even on the same level as calling LaDainian Tomlinson “LT,” since at least that was a case of shared initials. In a sport that thinks adding an “er” to the end of a guy’s name instead of an “ie” is what passes for stunning creativity, we’re talking about arguably the greatest nickname of all time, and a guy is just flat out trying to steal it. This cannot stand.

And don’t tell me that it’s OK because President Obama called him that. Obama doesn’t know anything about hockey; he probably called Marchand that because somebody told him to. That means somebody associated with the Bruins lied to the president, which — if I know my U.S. constitutional law — is treason. (Note: I do not know my U.S. constitutional law.) 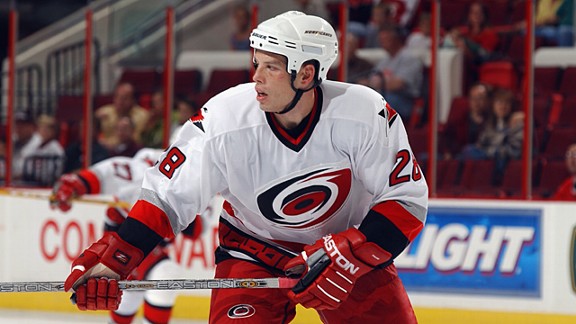 This week’s obscure player is former Hurricanes defenseman Steven Halko. He was a 10th-round pick in the 1992 draft who defied the odds to play parts of six seasons in the NHL. He also has a somewhat unfortunate claim to fame: He never scored a goal in the league.

That’s not necessarily anything be ashamed of, since the list of people who’ve never scored in the NHL is several billion names long and includes me and (I’m guessing) you, too. But none of those people has ever played as many games, seen as much ice time, or taken as many shots on goal as Steven Halko. He’s the all-time leader in each of those categories among goalless players, and it’s not close.

You know what? I feel bad for Steven Halko.

So let’s bring him back. We need a hockey version of the #oneatbat campaign to get this guy back in the NHL until he scores a goal. Sure he’s been out of hockey for 10 years and couldn’t crack the lineup of an NHL team these days, but surely the Blue Jackets could find room for him.

[Waits for everyone to join in …]

Yeah, you’re right. OK, on to the next section. 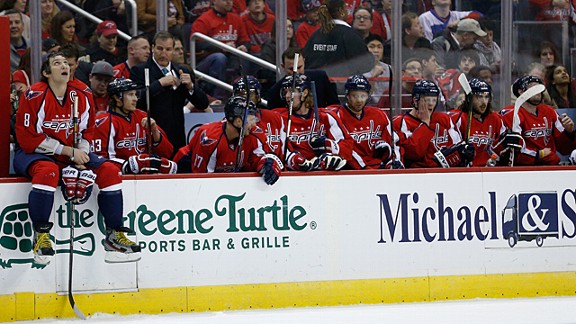 This week’s debate: Alexander Ovechkin was harshly criticized recently by a prominent TV broadcaster, who ripped him for “an awful display of hockey” and for acting “like a baby,” while adding that Ovechkin “should be ashamed of himself.” Did the criticism go too far?

In favor: Why don’t you go first on this one for a change?

In favor: After you.

Opposed: Well, that criticism is certainly framed in some uncharacteristically strong language, no doubt. But you can’t deny that Ovechkin’s been a disappointment this year.

Opposed: I mean, this is a guy with the NHL’s highest cap hit by almost $1 million. He needs to be one of the best players in the league, and he hasn’t been close.

Opposed: Thanks … hey, why are you being so nice to me?

In favor: No reason. Keep going.

Opposed: Well, nobody can deny Ovechkin’s talent, but the effort level seems to come and go. And when it’s not there, he deserves to be called out. I think that’s the point that was being made.

In favor: So you agree with the analyst then?

Opposed: Well, yes, though I haven’t seen the entire clip. Come to think of it, why haven’t you shown me the clip?

In favor: Don’t worry about that. Just say you agree with the analyst.

Opposed: Yes, I already told you that I … wait, which analyst was it?

In favor: Does that matter?

Opposed: It just seems weird that you haven’t mentioned his name yet, and it’s making me wonder if … OH, GOD, IT WAS MILBURY, WASN’T IT???

In favor: Too late! You agree with Mike Milbury about something!

Opposed: I do not! You tricked me!

Opposed: This is the worst day of my life.

Opposed: [Climbs into stands, beats “In favor” guy over the head with a shoe.]

The final verdict: Being attacked by Mike Milbury is going to be the best thing that’s happened for Alexander Ovechkin’s image all season.

Dear television commercial directors: Please stop using hockey in your ads. Specifically, stop using shots of people who are supposed to be watching a hockey game. You’re horrible at it, and it’s distracting.

I’m talking to you, beer commercial with a bunch of dudes sitting on a couch. You, too, pizza-delivery ad where a whole family enjoys the game together. And you, high-definition TV ad. Actually, especially you, high-definition TV ad; you’re the worst of all. Every clip looks like it was filmed by someone who not only had never watched a hockey broadcast, but had never inhabited a planet where hockey was played.

If you insist on still trying to include hockey clips in your ads, here’s a few tips:

If you want us to believe we’re watching a hockey broadcast, make it realistic. Show a screen plastered with ads for local car dealerships that make it hard to see the play that the director missed anyway, while a homer broadcaster shrieks his latest contrived catchphrase attempt. Then we’ll feel like we’re watching a game. 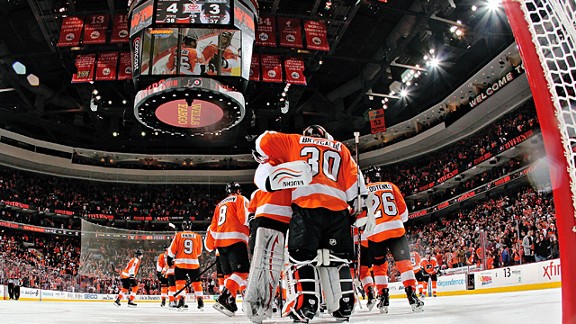 The week’s most depressing CapGeek page is the Philadelphia Flyers team page, which currently holds the distinction of being the only one in the league to list their projected cap space as $0.

The Flyers aren’t technically over the cap, since they have LTIR credits, thanks to Chris Pronger. (“LTIR” stands for “long-term injury reserve” and refers to an exemption for certain types of injured players that literally nobody understands.) But they’re very close, far closer than any other team in the league.

Would now be a good time to point out that the Flyers are under .500, are sitting in ninth place in the Eastern Conference, and have played more games than almost anyone else? The situation is so bad that when I wrote about guys on the hot seat this week, I had a steady stream of Flyers fans calling me an idiot for not including their coach.

So, yeah, this is the sort of thing that would be depressing to Flyers fans, if anyone who liked the Flyers was actually capable of human emotion.

It’s a testament to Don Cherry’s innate ability to be polarizing that he can say he thinks hockey is the best sport in the world, and half the sport’s fans will get mad at him for it.

This week, Cherry tried to use the end of his Coach’s Corner segment to give one of his typical rah-rah pep talks to the hockey community. He may have overshot the runway just a tad:

Yeah, that didn’t go over well.

I love old All-Star Game introductions. In any sport, they’re my go-to search for a quick nostalgia hit. YouTube user “Disengage” has posted a ton of NHL intros, and you really can’t go wrong with any of them. For today, let’s go with the 1994 game, brought to you from Madison Square Garden.

The lesson, as always: Mike Komisarek ruins everything.