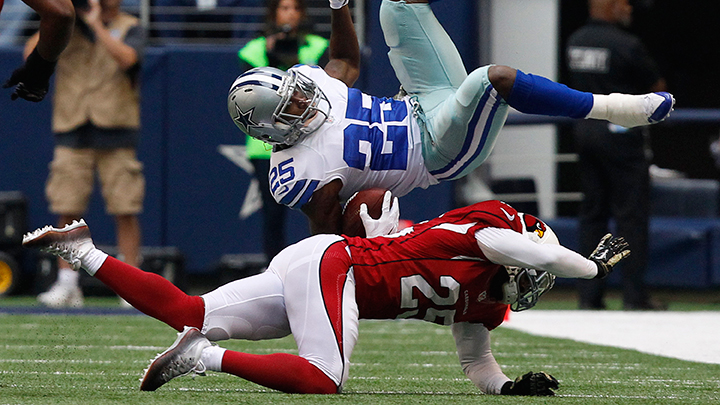 Tony Romo’s absence let some air out of a Cardinals-Cowboys game that was hyped as a battle for the no. 1 seed in the NFC. But if you were looking for injury sympathy in Arizona, you came to the wrong place: Arizona lost the majority of its front seven before the season and its starting quarterback for three games, and last year’s seventh overall pick has yet to play significant snaps for the team’s offensive line. I’m not sure how the rules work, but as of right now, we should just give Coach of the Year to the entire Cardinals staff.

The formula Dallas has used all season was always going to be tougher to apply against Arizona. The Cardinals have one of the best run defenses in the league — sixth in DVOA coming in — and as a result, DeMarco Murray almost looked human for the first time all year. Moving the ball against Arizona means moving it through the air, and with Brandon Weeden in for Romo, that was a problem. We were already deep into garbage time when Dez Bryant scored Dallas’s first offensive touchdown.

Facing Weeden instead of Romo was a nice bonus, but for the second straight game, the Cardinals got the type of contributions from their secondary they had hoped to have going into the season. Seven defensive backs played at least 18 snaps for Arizona yesterday. On top of the maniacal blitzing that has defined Todd Bowles’s defense this year, the Cardinals’ ability to be creative in the secondary is part of what has allowed them to overcome all the attrition up front.

As soon as I heard it was snowing in Foxborough yesterday, I should have known. It has nothing to do with Peyton Manning, but more to do with how many times we’ve seen Tom Brady do this, in the cold, at home. Brady has been superhuman since New England’s terrible trip to Kansas City, but yesterday was a different level. Carving up the middle of the Bears defense is one thing. Doing it against a defense that had been near the top of the league was another.

A week after slowing down Philip Rivers — which may be getting a little easier — the Broncos were torched by Brady, Gronk, and the rest of the crew. The Patriots offensive line deserves its share of credit here, too. Early in the year, New England’s inability to keep Brady upright was a major factor in the team’s offensive struggles. But on 58 dropbacks yesterday, the Broncos came away with just one sack. Denver’s pass rush got its shots in, but Brady had enough time — and the willingness to stand in and take those shots — to find the holes in the Broncos secondary. And it doesn’t hurt that Rob Gronkowski looks like his old self again.

Rookie fourth-round pick Martavis Bryant — with his five touchdowns in three games — has given Pittsburgh an added vertical element to go along with the nightmare that is Antonio Brown. A key difference between last night and the first time the Steelers faced the Ravens is that the Steelers offensive line actually gave Roethlisberger enough time to get vertical. Aside from one disaster of a drive, when Roethlisberger was sacked on three straight snaps, the Steelers managed to keep him on his feet. Against a Ravens secondary that doesn’t have much without Jimmy Smith, that bit of time was all Pittsburgh needed.

Even with the Patriots’ victory, the most impressive win of the day probably happened in Miami. It’s hard to beat a team as completely and convincingly as the Dolphins did yesterday.

Ever since Joe Philbin wavered about keeping him as the Dolphins starting quarterback, after Miami’s 34-15 loss to the Chiefs, Ryan Tannehill has completed 68.8 percent of his passes for 1,283 yards, with 10 touchdowns and four interceptions, all on 8.2 yards per attempt. I’d say Philbin made the right move. Tannehill was excellent again yesterday, including a beautiful touchdown throw to Charles Clay in the back corner of the end zone for one of Miami’s early scores. He also continued to be sneakily useful as a runner. In the Dolphins’ past four games, Tannehill’s rushing totals are 49, 48, 48, and 47. Those pile up. He’s on pace to finish the season with about 500 rushing yards.

Tannehill aside, the game ball has to be cut into about six pieces and handed out to Miami’s defense. D.J. Fluker probably needed a vacation knowing he was facing Von Miller and Cam Wake in successive weeks — too bad he took it during this game. To be fair, the Miami pass rush was coming from everywhere — Olivier Vernon, Randy Starks, and Earl Mitchell all did their part as well. It was a great example of just how much of an advantage Miami’s front four can be in a given week. There wasn’t a single matchup along the lines in which the Dolphins didn’t have the edge, and that left the Chargers without a running game and Philip Rivers without a chance to make his go-to step-up-in-the-pocket move. Combine that dominance up front with the way guys like Reshad Jones and Brent Grimes played in the secondary, and you have a top-five defense.

So far, I’d say Maclin’s decision to turn down a five-year offer from the Eagles and bank on a big season in his first year in Chip Kelly’s offense is working out just fine. Coming off a torn ACL, Maclin decided it was worth it to show teams what he can do when he’s healthy, rather than settle for a lower per-year number with Philadelphia. Through eight games, he’s been one of the better receivers in football. After six-catch, 158-yard, two-touchdown day against the Texans, Maclin is now fifth in the league in receiving yards and receiving yards per game, and tied for fourth — with Brown and Gronkowski — for touchdowns.

He is clearly the Eagles’ no. 1 receiving option, and as Philly gets at least some of its offensive line back,1 some more success in the running game should open things up for Maclin even more. It’s always fun to see players take a chance on themselves and have it go well, and there’s no better example than Maclin running past the Texans defense again and again yesterday.

Philip Rivers: "I was terrible. When your quarterback is terrible, it's hard to win."

Well, that’s one way to look at it. Even as the offense struggled against the Broncos last week, there were still some of the “What? How?” throws from Rivers that he’s pulled off all year. Sunday, those throws were nowhere to be found.

Some of the choices Rivers made yesterday are the type he’s mostly avoided in the past two seasons. When San Diego’s offense has succeeded under Mike McCoy, it’s been because the Chargers rarely look desperate. There are plenty of spectacular throws, but mostly, Rivers takes what the defense gives him. Yesterday, Rivers looked more like the quarterback he was in 2012, pressing to make the plays he thought he had to. It was a mess of a game — the kind where mistakes tend to pile up — but it was also a telling sample of where the Chargers’ shortcomings could eventually do them in. With a rotating cast of characters at center, average guard play, and a right tackle who can struggle in pass protection, San Diego has trouble running the ball and sometimes lets the pocket around its quarterback crumble.

Don’t let the box score fool you. Houston may have scored 21 points yesterday, but its offense was nowhere close to a unit capable of putting up three touchdowns. The Texans’ first score was a pick-six, and their next was a long pass down the sideline for an Arian Foster touchdown against busted coverage. For the most part, Houston struggled to move the ball with any consistency, going 5-of-13 on third down and managing just 300 yards of offense.

Outside of Dallas, no team in football is more dedicated to running the ball than the Texans, and when they can’t do that, everything falls apart. Foster has been incredible all year, but with teams intent on slowing him down ­— which the Eagles were yesterday — Houston doesn’t have the passing game to take advantage. Without Foster’s 56-yard touchdown, the Texans were 12-of-26 for 147 yards through the air.

Andre Johnson’s stat line was just as depressing as its been all year: seven targets, two receptions, 12 yards. Only five receivers in football have more targets than Johnson, yet he’s currently 12th in receptions, and 103 players have caught more touchdowns. I guess we can’t blame the guy for how bummed out he was coming into the year — or how bummed out he is now, according to Cary Williams. It’s been rough.

Losing is Tampa Bays art, and this was the team’s masterpiece. The look on Mike Pettine’s face here is one I’m pretty sure every coach has had as he’s prepared for this year’s Bucs.

The sack montage was alive and well during the 49ers-Rams broadcast yesterday. It had to be, considering it was updated on just about every drive. The Rams sacked Colin Kaepernick eight times, including on seven different drives and six times in the first half — more than their season total coming into the game.

Some of that carnage can go at the feet of rookie center Marcus Martin, who looked lost in his first start against one of more blitz-happy teams in the league. But Kaepernick did little to help his offensive line. He held on to the ball too long all day, and with the amount of pressure St. Louis was bringing, any hesitance was enough to do him in.

It was just the latest below-average day in a season full of them for the San Francisco offense. The past few years, there hasn’t been much confusion about what kind of team the Niners have wanted to be. Frank Gore, the Niners offensive line, and Kaepernick’s feet fueled the 49ers offense. No team in football threw fewer passes. This year, the 49ers are tied for 14th in rushing attempts.

Even with all the injuries on defense, San Francisco has done enough on that side of the ball to keep the team in games, and there’s a chance its trio of linebackers will be back sooner rather than later. But if the 49ers are going to keep pace for the wild card, they have to figure out something on offense, and they have to do it fast.

Pain and Progress at Ole Miss: 48 Hours in the Grove