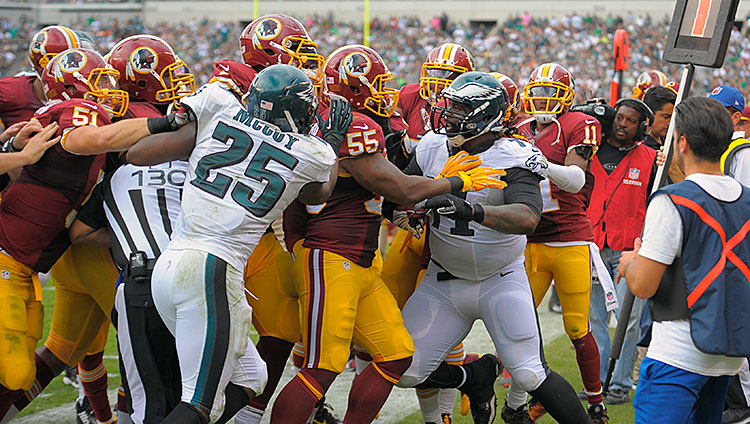 Three games in, the most impressive team in football resides in Cincinnati. It’s not just that the Bengals are sitting at 3-0, and alone atop the AFC. It’s that they’ve had no trouble doing it. A week after comfortably taking care of an Atlanta team that would eventually score 56 on Tampa Bay, Cincy hammered the Titans.

Jake Locker giving the Bengals the ball a couple of times helped, but that’s just what Cincinnati does. The Bengals suffocated the Falcons’ passing game. It’s not hard to guess how it would go for Locker.

Andy Dalton catching one more touchdown than he threw yesterday has a perfect sort of logic, given how Cincinnati is playing offense right now. Dalton is still the team’s biggest question mark, but offensive coordinator Hue Jackson has the creativity to turn this unit into the best one Marvin Lewis has had in recent memory. With Giovani Bernard skirting around, Jeremy Hill running like a cannonball, and a healthy A.J. Green, Dalton doesn’t have to do much. The Bengals go to New England in Week 5, and I think right now, one of those teams is much better than the other.

Welcome to the 2014 Texans offense, where Nuk Hopkins and Andre Johnson are great, but spend most of their time getting hit in the shins by Ryan Fitzpatrick. Hopkins should have had the catch of the year yesterday, but since Houston’s receivers are forced to live in misery, it was wiped off by an illegal formation penalty. The one-hand factor is amazing, clearly, but the part that makes no sense is how far back he’s reaching. Nothing about that play should be possible.

Anyone Watching the Philadelphia-Washington Game

Both Nick Foles and Kirk Cousins had their miscues in crucial spots, but watching them go back and forth chucking it around the field yesterday was a blast.

Cousins tried a few throws he probably shouldn’t have — not including a late interception, which was probably as much Niles Paul’s fault for breaking off his route — but that’s actually what makes him kind of thrilling. Cousins has a ton of confidence in his ability to fit the ball into tight spaces, especially between the corner and the safety down the sideline, and there are moments when it can lead to some massive chunk plays.

After slicing up the Jaguars, Cousins again looked like he has enough to make Washington a potent passing team. Having Pierre Garcon and DeSean Jackson doesn’t hurt. Jackson catching an 81-yard touchdown yesterday was inevitable.

Cousins’s only problem was that Nick Foles came to play. Foles was far from perfect. Last season, he had a lot of luck with picks, and the incompletion/almost-interception that led to him getting decked and sparked a brawl — which saw both Chris Baker and Jason Peters tossed — had a little of his 2013 fairy dust on it. But after taking that shot, Foles still managed to take the Eagles down for the go-ahead score.

Philly is going to need more of those throws — and the ones threaded to Jordan Matthews for touchdowns — and less of Foles airmailing a wide-open Brent Celek near the goal line, because there’s a good chance they’ll be needing their passing game more than ever moving forward. Center Jason Kelce left the game with an abdominal strain, and with left guard Evan Mathis already hurt, the Eagles are now without two of the top interior offensive linemen in football. And it showed. LeSean McCoy averaged 1.2 yards per carry on his 19 rushes yesterday.

When Arizona beat the Giants with Drew Stanton at quarterback last week, it was thanks mostly to a game-changing punt return from Ted Ginn and another mammoth performance from its defense. The Cardinals still needed their defense yesterday, but no one can say they beat the Niners in spite of Stanton.

Another horrible slew of penalties hurt San Francisco in the second half, but Stanton also went 5-for-5 on third down after halftime, including a throw to Ginn that set up John Brown’s first touchdown catch of the day.

In a league in which losing a starting quarterback typically spells doom, Arizona got to 3-0 while sending San Francisco to 1-2. Some parts of the Cardinals offensive line are still an issue, but if Carson Palmer can come back, the rest of this team looks like it has a real chance to compete in an NFC that isn’t quite as good as we thought.

That’s more like it. The offense we saw against Houston has to be what the Giants envisioned when they put it together in March. Rashad Jennings finally got a break from running into brick walls, and ran all over the Texans. Jennings has underrated top-end speed, but what we saw Sunday is the best version of him — smoothly churning out five yards at a time. Add a big play from Victor Cruz, Eli Manning completing 75 percent of his passes, and another nice day from the productive Larry Donnell, and you get the ideal version of this offense.

While we’re on the Giants, it’s worth mentioning that Jason Pierre-Paul, after what seems like two empty seasons, looked something like his old self yesterday. He was making plays near the line of scrimmage all game, and his pressure led to the first of Ryan Fitzpatrick’s terrible interceptions. There’s a chance that, after running into a Calvin Johnson–size buzz saw in Week 1 and spending their first two games dealing with a couple of the better defenses in football, the Giants are better than we thought.

Save for two quarters against maybe the worst secondary in football, the Packers offense has looked downright average.

The ground game should arrive at some point. Eddie Lacy has faced an even more difficult slate of run defenses than Jennings has. His 3.1 yards per carry has more to do with that than his own problems, or what the Packers offensive line is doing. The big deal this weekend was Aaron Rodgers not lighting the secondary aflame. That’s tradition, man. He had his moments Sunday, but for the most part, the Lions had Rodgers on the run all day.

At its best, the Detroit pass defense crumbles pockets, which Rodgers was dealing with all day. Nick Fairley did some horrible things to Corey Linsley, and when Linsley got a break from Fairley, he got to deal with Ndamukong Suh. When Fairley is on, I can’t imagine the motivation it takes to get out of bed the day you have play those two. It looks like a truly miserable experience.

Green Bay won’t be dealing with that sort of duo every week, but right now, it’s always something with the Packers. Maybe Detroit finishes the year as a top-five defense, and two tough days against the Lions and Seahawks don’t look so bad. But the Packers looking like the Packers has come only in spurts.

The earlier mention of Ryan Fitzpatrick wasn’t enough. He was truly awful yesterday, in the first game all year in which the Texans have been forced out of their plan to run as many times as possible just to keep the ball out of his hands.

The three picks were part of it, but to run back a line from Friday’s Grantland NFL Podcast, it looks like half of Fitzpatrick’s passes start tailing off before they get to his receivers. He’s throwing cut fastballs — which, in football, isn’t ideal. I feel terrible for Johnson. He and Hopkins would probably be one of the better receiving duos in the league with better quarterbacking. I’m just not sure Ryan Mallett would be the one to give it to them.

Man, do the Browns know how to lose. That’s not a joke about them being bad, by the way. Every week, Cleveland has done a little something more to inspire hope, both for this season and beyond. But the team’s two losses have been particularly heartbreaking. A week after the Ravens dismantled Pittsburgh, the Browns had several chances to put Baltimore away and climb back in the division. That’s when missed field goals, receivers falling down en route to touchdowns, and backbreaking punt-return miscues start coming into play.

The solace for Browns fans, even at 1-2, is that it looks like this is a team that has a chance to be in it every week. Brian Hoyer looks more than competent, Andrew Hawkins looks like a bargain, and Isaiah Crowell might be the best running back from this entire draft. The Browns have also put together a better offensive line than they’ve gotten credit for. It’s hard to count on a future with Josh Gordon, but with him, Cleveland has the makings of a pretty respectable offense.

Eventually, the “at least we tried hard” part of the Gus Bradley era has to end. Part of bringing in guys like Chris Clemons and Red Bryant was to add some respectability to Jacksonville’s defense. Giving up 30 points in the first half isn’t respectable. Not being able to sustain drives or keep your defense off the field never helps, but at a certain point, the Jags have to stop someone, too.

Whether starting Blake Bortles, which Jacksonville is apparently ready to do, will help any of this is up for debate. The Jags have done an absolutely awful job protecting the quarterback this year, with four more sacks coming yesterday, after giving up 10 a week ago. Both Bradley and Dave Caldwell still deserve more time, considering what they were taking over in Jacksonville, but the problem isn’t that the Jags aren’t winning. It’s that they’re not even headed in the right direction.