NFL Trades That Should Have Happened 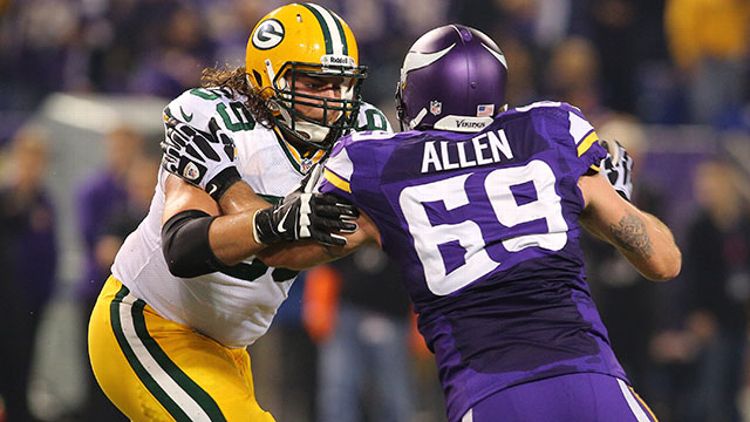 Yesterday’s NFL trade deadline came and went with a flurry of activi … oh, just the one deal, then? I guess that works, too. Despite rumors swirling around everybody from Adrian Peterson to Kenny Britt, the only swap consummated Tuesday saw the Eagles deal nose tackle Isaac Sopoaga and a sixth-round pick to the Patriots for a fifth-rounder. It was an admission of failure from Philly; Sopoaga just signed with the Eagles in free agency in March, and for the privilege of moving up about 20 picks in the later rounds of this year’s draft, they paid Sopoaga in excess of $3 million. (And if you think that still might be worth it, the signing hurts their chances of ending up with an extra compensatory pick.)

The leaguewide silence is wildly disappointing, if entirely expected. NFL teams are loath to publicly give up on their season, and with a 16-game schedule dictating that teams really just need a hot stretch to become a playoff contender again, it’s easy for would-be sellers to buy in and believe that they’re capable of turning things around with the players they already have. Teams with winning records are more likely to believe they’re the way they are because of the talent already on hand, and won’t want to spend key development time during the second half of the season on getting a new player up to speed. You can learn a baseball team’s signs or a basketball team’s sets in an hour. It can take you weeks to learn a football team’s playbook. That’s why in-season trades are so rare. And given that three notable players (Bryant McKinnie, Eugene Monroe, and Trent Richardson) were already traded during the regular season, it’s no surprise that this trade deadline was a quiet one.

Of course, just because the trade deadline was quiet doesn’t mean that teams should have been quiet. There were a number of organizations with gaping holes in need of a quick fix, and several more with players who needed to go out the door. Hopeless teams like Jacksonville and Minnesota could have saved millions of dollars while getting rid of a player who won’t help them win this year anyway.

That’s where I’m stepping in. I’m going 24 hours back in time, turning on Commissioner Mode, and making a whole bunch of trades that help both teams. (Is that the most Grantland sentence ever?) While Robert Mays put together a bunch of potential trades in September, I’m going to focus on the guys who were actively discussed as likely trade candidates over the past couple of weeks. I’ll try to include situations in which a team could come reasonably close to fitting each player into its available salary-cap space, although the murky rules of the league’s cap system dictate that there’s some flexibility possible with any deal. Put it this way: The Seahawks have just less than $3.6 million in cap space available, per Spotrac. I’m not sending Jared Allen and the $8 million or so left on the final year of his deal there. Let’s start with him, though …

Denver is really the only spot on the national landscape that makes sense for Allen. You would only really think about picking up his massive salary if you were a competitive team playing a 4-3 defense in need of a pass-rusher. That leaves, by my count, the Patriots, Chargers, Cowboys, Lions, and Bears. There’s not a ton of salary-cap space left floating around to pick up a contract this big, even if it’s the final year of Allen’s deal. The Bears ($3.8 million), Chargers ($3.3 million), Cowboys ($2.4 million), and Lions ($2.7 million) all don’t have enough space to squeeze Allen onto their roster. The Broncos have nearly $10 million in cap space left after the Elvis Dumervil fiasco, and while Shaun Phillips has been effective since coming over from San Diego, adding Allen allows Denver to rush Allen, Phillips, and Von Miller at the passer on most third downs. That’s scary. Allen would have had a bigger impact in San Diego on a Chargers team that’s totally desperate for a pass rush, but Denver was the only team that fit our qualifications.

Forget that Patriots deal. Sopoaga needs to return to his roots and get back together with the 49ers. Sopoaga washed out in Philadelphia, but the 49ers lost Sopoaga’s replacement, Ian Williams, to a season-ending injury earlier this year. Former backup Ricky Jean-Francois is in Indianapolis, which means the 49ers are down to Glenn Dorsey and fifth-round pick Quinton Dial at nose tackle. Sopoaga could have returned in a situational role without any future money guaranteed.

This seems like a good fit. The Titans may very well cut Britt in the near future, given that he wore out his welcome with the organization and isn’t playing regularly. The former Rutgers star is in the final year of his rookie deal and has been one of the worst players in football when he has been on the field (in addition to rumors about his off-field activities), but he’s not far removed from looking like one of the most promising weapons in the game before his torn ACL. The Patriots are desperate for anything resembling a big-play weapon at wide receiver and have a history of taking chances on players who were toxic elsewhere. It seems like the opportunity would have been worth a conditional seventh-round pick.

Oakland’s surprising offense has gotten little out of its tight ends; starter Jeron Mastrud has four catches this season, while backup Mychal Rivera has 12 catches for 138 yards. Davis hasn’t looked like his former self since returning from his torn Achilles, but he was also dealing with a high ankle sprain before the emergence of Jordan Reed, which has reduced Davis to a healthy scratch. Even if Davis doesn’t have his previous athleticism yet, he would offer the Raiders a viable pair of hands to aid in the continuing development of Terrelle Pryor. Again, this would be a deal for a conditional seventh-round pick, basically the bare minimum to justify getting Davis off the roster.

This is a tough one. The Cardinals are floating trade rumors regarding Fitzgerald to soften the blow when they eventually decide to move on from their star wide receiver, either via trade or release. Fitzgerald’s numbers have dipped badly over the past couple of seasons, and while that’s likely due to poor quarterback play, it’s pretty clear Arizona doesn’t want to tie up $18 million per year in cap space on a wide receiver in his thirties.

It seems more likely that the Cardinals will deal Fitzgerald after the season, but if they were going to deal him now, the most obvious landing point would be Carolina or Philadelphia. I already have somebody in mind for the Panthers, so I’m sending Fitzgerald back to Pennsylvania, where he played his college ball a few hours away in Pittsburgh. The Eagles actually have just less than $19 million available on their cap this year and should have been able to fit Fitzgerald in, and it would have given them the receiver they sorely need to beat man coverage across from DeSean Jackson (albeit at a heavy price). The personnel fit makes a bit of sense, but it’s hard to imagine the two teams agreeing on a price; nobody’s going to give up a premium pick for Fitzgerald given his age and salary, and the Cardinals would struggle to deal their long-time face of the franchise without getting a notable pick in return.

Meanwhile, I think the Panthers opt for a younger, cheaper option at wideout. The Giants aren’t likely to deal Nicks inside the NFC East, but a move to Carolina would make more sense. The Panthers desperately need a wideout who can make plays alongside Steve Smith and Greg Olsen, and while Nicks has had an awful case of the drops this season, he has been getting open for pass-catching opportunities. If the Giants aren’t re-signing Nicks after the season — and it certainly doesn’t look like they’re interested — they should have moved on. Nicks was born in Charlotte, played high school football there, and went to college at North Carolina. He belongs on the Panthers. Nicks is also regarded as a solid human being off the field, which is one of the reasons why I think the Panthers would opt for him as opposed to the final wideout in this discussion …

I can’t do this one. Gordon has been incredible since he returned from his suspension; his numbers, prorated to a full season, would produce 85 catches and 1,552 receiving yards. And that’s with Jason Campbell, Brian Hoyer, and Brandon Weeden throwing him the ball. He’s 22 years old. The Browns are going to pick a quarterback with one of their first-round picks in next year’s draft. Why would they want to get rid of that quarterback’s franchise wide receiver? I understood trading Richardson away. I can’t imagine how trading Gordon makes much sense.

I don’t care what anybody else wants. Maybe Gonzalez wants to stay in Atlanta. Maybe the Falcons want to keep their tight end under some impossible comeback plan. Maybe the Chiefs don’t want to trade away their draft picks. Whatever. I’m the commissioner, right? The Chiefs send a sixth-round pick to the Falcons for Gonzalez, giving their former star one last chance at a title and Alex Smith something resembling a consistent receiving option during Kansas City’s run to the playoffs. Air a three-minute “Welcome Back” video before his first home game that gets everybody in tears. This is also, by the way, my plan for what should happen when the Chiefs let Dontari Poe eat local barbecue again for the first time next offseason.

If the Cowboys want a veteran running back, by all means, let them give Jacksonville another midround pick to upgrade on DeMarco Murray. No refunds on this one. The Adrian Peterson rumors never made any sense given Dallas’s bleak cap situation, but MJD would be a viable option for the remainder of 2013.

I’d probably throw in a few more deals for the teams that recently saw regulars suffer season-ending injuries. Maybe Falcons defensive tackle Peria Jerry and Giants utility offensive lineman David Diehl head to New England. There’s gotta be a guard — Jacksonville’s Uche Nwaneri? — to help out the Cowboys after Brian Waters went down for the season this week. If the Jaguars are dealing MJD and Nwaneri, why not burn the thing down and ship linebacker Paul Posluszny to the Bengals, who just lost Rey Maualuga for a month with a sprained MCL? And with the Lions benching both of their starting cornerbacks at different points during the first half, wouldn’t it make sense to pick up Atlanta’s Asante Samuel for the stretch run?

OK, so some of these trades make more sense than others. (The Fitzgerald deal seems pretty unlikely.) In every case, though, there’s a team with an obvious need at a position and a player who was purportedly on the market when the trading deadline went down on Tuesday. I could do this every day. What else can I do with this Commissioner Mode power? How do I push Eli Manning’s interception rating out of the teens? Somebody help me with this thing.

Even the Spurs' Salsa Endorsements Are Beautiful and Efficient