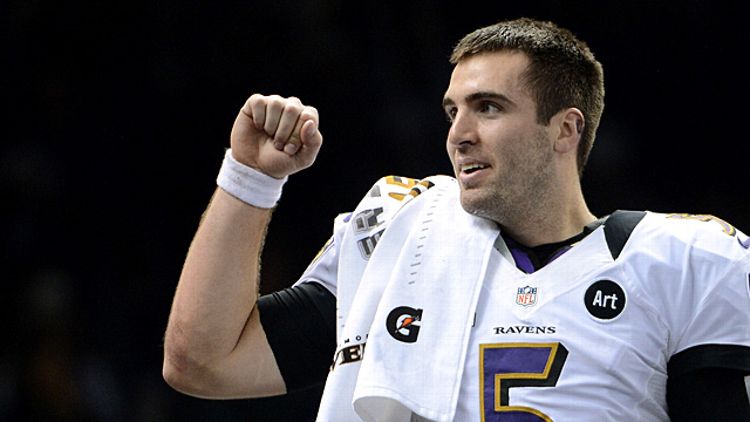 And finally, we get to the champs. Well … sort of, as Barnwell points out early on. The Ravens rode a highly improbable playoff run to their second Super Bowl win in franchise history last season, but these are preview podcasts. Taking stock of this year’s Ravens means evaluating a different group.

After rehashing Baltimore’s 2012 postseason, we get into all the changes Baltimore has made since winning the Super Bowl (7:09). Gone are Ed Reed and Ray Lewis, replaced (hopefully) by Baltimore’s first- and second-round picks from April’s draft. Playoff heroes Paul Kruger, Cary Williams, and Anquan Boldin are also gone, and although Barnwell has some concerns about how quickly all the new defensive pieces can come together, I chose to put my faith in Ozzie Newsome & Co. (OK, so did Barnwell; he just doesn’t think it happens this year).

One topic on which we’re a little further part is Joe Flacco (15:05). You can read our Flacco conversation in full below, but where Barnwell thinks the playoff Flacco is closer to the real Flacco, I still have my doubts:

Barnwell: Now, we know that Joe Flacco’s not going to go the rest of his life not throwing any interceptions like he did during the playoff run. I think he had 11 touchdowns, no interceptions, somewhere around there. The no picks I’m sure about. First preseason game, what does he do on his first drive? Throws an interception. So we know that’s going to come back. The question, though, and it may be the most important question for the Ravens this year, is what do we get out of Joe Flacco? Do we get something that’s closer to the postseason Joe Flacco, or do we get something more akin to the guy who really hasn’t been that great over the past couple regular seasons?

Mays: I think you and I come down pretty similarly here in the sense that I’m always going to lean toward the larger sample of games I have from someone, rather than one stretch.

Barnwell: But that was not with Jim Caldwell, so I mean is there reason to think it might be a different context and a different situation than it had been before Caldwell got there? As you mentioned earlier, you are not a Cam Cameron fan.

Mays: I am not a Cam Cameron fan, but at the same time, I saw a couple of those catches Anquan Boldin made in the playoffs last year. I’m very wary of what the next five years of Joe Flacco are going to look like. I think we’re going to reach a point where if you’re a Ravens fan or someone who watches the NFL, you’re going to make the evaluation whether or not that one Super Bowl was worth having to pay him for these next five years. I have a lot of questions about that. I’m still not convinced. He played very well, but I think a lot of guys can play very well for a stretch of four games, and I don’t think they helped him out a lot with what they’re providing him on offense.

Barnwell: You know who didn’t play very well for a stretch of four games?

Mays: You’re the worst. It was six games, and I know that he didn’t play very well. I mean, what do you think? Are you a Flacco guy? I don’t think I’ve ever talked to you about this.

Barnwell: First off, I think the proper term is Flacco backer.

Barnwell: Or whacko for Flacco. Other terms might be out there, but in any case, I’m of two minds about Joe Flacco. I think, genuinely, Joe Flacco will be a better quarterback this year than he’s been in any previous regular season. I don’t think that’s an incredibly unreasonable statement to make on a talent level. I think he has that confidence from winning the Super Bowl. I think the offense is better built to his actual strengths now, as opposed to what his weaknesses and strengths were four or five years ago. But the problem for me, and what I wonder about Joe Flacco and this Ravens offense in general, is that there aren’t going to be the receivers there. Torrey Smith should be better than he was a year ago; I think he’s maturing into a very good wide receiver. But that’s where it ends.

Following our Ravens talk, we get straight into the Bengals, and I’ll admit I might have gotten over-excited. We start with the Bengals’ pass rush (24:50), led by the incomparable Geno Atkins, and from there, Barnwell and I talk about the job the Bengals (specifically Marvin Lewis and Mike Zimmer) have done putting together an elite defense without a lot of high draft picks, the prevalence of Italian first names in the AFC North, my high hopes for Tyler Eifert (34:07), and how we should feel about Marvin Lewis’s performance during his time in Cincinnati (36:19). As most of these previews have gone, the Bengals conversation ultimately came down to the quarterback, and what Andy Dalton’s outlook might be in the coming years (38:15).

The most important revelation, though — even more important than the differing opinions Barnwell and I have about how the Bengals will finish — was Barnwell’s hatred of Hard Knocks (45:12). I’m not going to try to explain his reasoning. It makes no sense.

About Last Night: Boston Bows Out