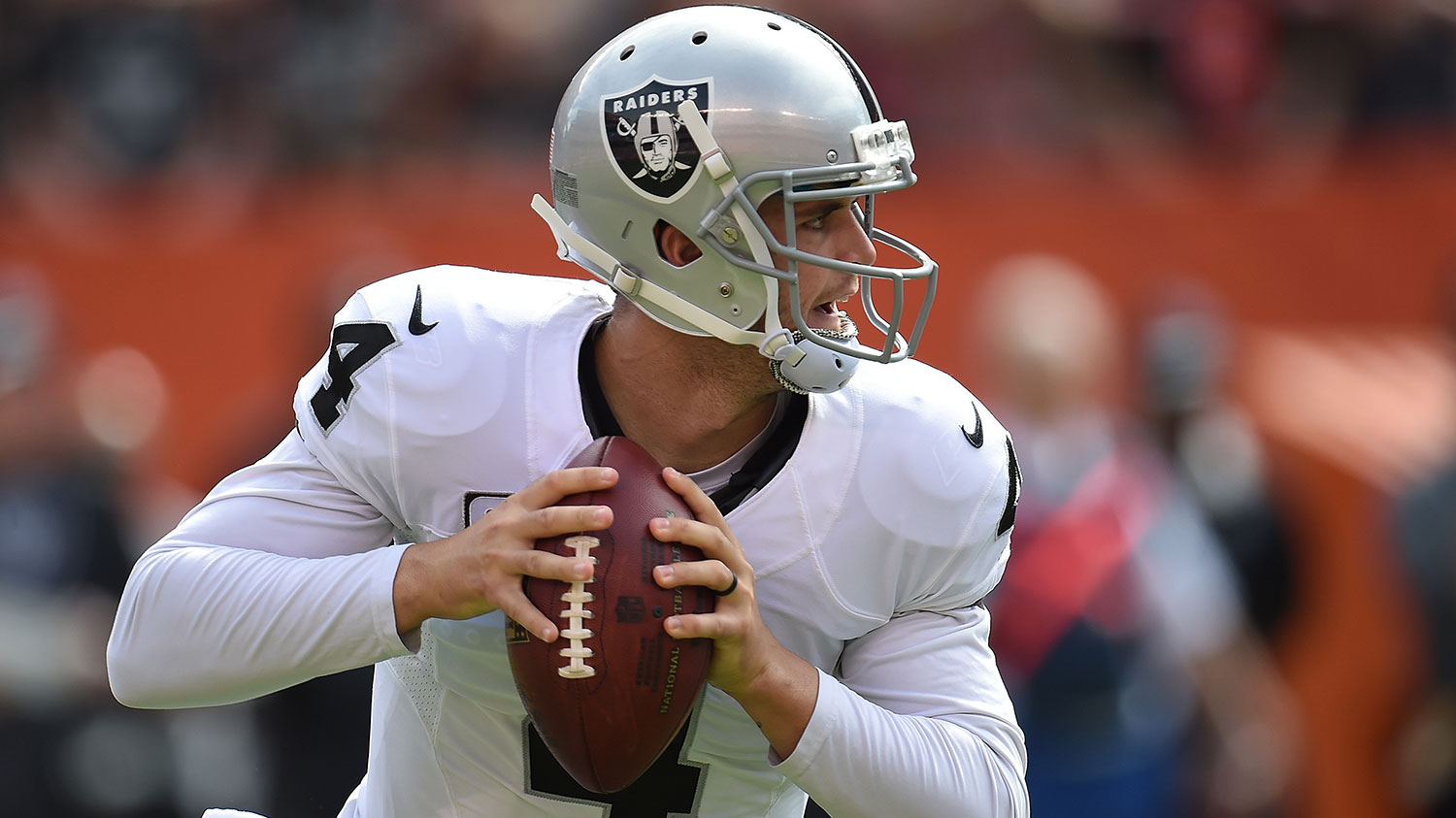 The Raiders are no strangers to offensive futility. Even before hitting the point-scoring wasteland of this past decade, much of Oakland’s recent history has been spent searching for a quarterback. The Rich Gannon era was like stumbling onto an oasis in the desert, more happenstance than a plan: Gannon was 33 when he arrived from Kansas City, where Elvis Grbac had edged him out for the starting job. In Oakland, he went to four straight Pro Bowls — the only four of his career — and miraculously won the MVP in 2002. Considering what had happened before and what’s happened since, Oakland deserved that bit of luck.

Marc Wilson is the first name Oakland fans will roll their eyes at. The Raiders drafted him 15th overall in 1980 as the long-term replacement for Ken Stabler, but when stopgap quarterback Dan Pastorini broke his leg, the Raiders turned to 32-year-old Jim Plunkett instead of the rookie. A few months later, Plunkett helped Oakland win its third Super Bowl. Wilson was eventually handed the reins, but he never did much with them. He started 60 games and finished his career with 102 interceptions and just 86 touchdowns. In 1988, Oakland moved on from Wilson, first rolling with former Washington quarterback Jay Schroeder, and then drafting Todd Marinovich 24th overall in 1991. While the Marinovich project was famously short-lived, the miss that hurts the most is the most recent. In taking JaMarcus Russell first overall in 2007, the Raiders passed on Joe Thomas, Calvin Johnson, and Adrian Peterson, all for a quarterback who started 25 games in his career.

There have been trades for Carson Palmer and dalliances with Terrelle Pryor since then, but really, the Russell catastrophe brings us up to date. Dredging up the list of failed Raiders quarterbacks shows just how deeply the Raiders had been stuck in the muck. But three games into this season, mentioning names like Russell, Marques Tuiasosopo, and Andrew Walter helps explain something else: the bliss that Raiders fans must be feeling as they watch Derek Carr and the rest of the Oakland offense.

Anyone who appreciated the ability to really sling a football — and I mean really sling it — couldn’t help falling for Carr when he was coming out of Fresno State. As a pure thrower, he had the most talent of any quarterback in last year’s draft. The problem is that NFL success is rarely tied to how good a player looks whipping it around the yard. It can elevate a quarterback with all the other requisite traits (see: Aaron Rodgers), but it’s hardly necessary (see: Peyton Manning).

When Carr fell to the second round, it was reportedly because he had problems showing off that arm amid imperfect conditions. Carr struggled with defenders around his feet at Frenso State, and even when he did have ample protection, there were moments when he was content to lean back and rely too much on that rocket launcher attached to his shoulder.

When you look at the Raiders’ game plan last year, the theory that pressure was Carr’s worst enemy seemed to hold. Oakland finished 23rd in air yards per throw last season and Carr finished with an abysmal 5.5 yards per attempt as a rookie. The Raiders were content to subsist on a diet of short throws, and with a receiving corps that left much to be desired, they probably weren’t leaving much on the table. Still, Carr’s struggles as a rookie had to do with more than just his receiving options. His arm flashed every so often, but he also sailed plenty of throws and failed to use the space provided by a pleasantly surprising Raiders offensive line.

Not taking advantage of the pocket remains Carr’s worst habit, even as he’s topped 300 yards in both of the starts he finished this year.1 This isn’t an easy throw to Mychal Rivera, but by drifting to his right when he could easily step forward, he makes it impossible.

Yet calling Carr impatient would be wrong. On plays where his primary read isn’t there, he’s content to hold back and let it all develop. And in the rare case that the pocket does crumble around him, he has a knack for keeping his eyes downfield and improvising throws that a lot of other quarterbacks can’t.

The problem, rather, is that when his primary throw is there, he gets too eager. You could see the frustration after he missed this easy throw to Michael Crabtree on Sunday. It was pitch-and-catch, and Carr made it harder than it needed to be.

It’s a notable play because of the throw but also because it’s a good example of how offensive coordinator Bill Musgrave is giving Carr room to work. Against the Browns, the Raiders created tons of space based solely on alignment and route combinations — all in an effort to simplify Carr’s life and allow his arm to take over. As his final line suggests — 314 passing yards, nearly 10 yards per attempt, two touchdowns, and no interceptions — it often worked.

The following play might be my favorite — a slant to Amari Cooper from a drive in the first quarter. With three wide receivers already lined up to the left side, Cooper has plenty of room as the single receiver on the right. Still, Musgrave goes a step further and motions Latavius Murray out wide just before the snap. With the linebacker now removed from the middle of the field, it’s only a matter of Cooper winning to the inside and Carr putting the ball where it needs to be. In those conditions, more often than not, he’s going to.

For as dark as its quarterback days have been, Oakland’s recent history at wide receiver hasn’t been much better. Randy Moss was the Raiders’ last 1,000-yard receiver, and even that feels like an empty victory, considering what Moss did for New England just a few months after leaving.

Upon drafting Cooper, the hope was that the former Alabama star, considered the most polished college wideout in years, might change all that. And even if it’s been only three games, he’s certainly on his way. After roasting Jimmy Smith for a touchdown on a beautiful post-corner in Week 2, Cooper had his way with Joe Haden more than once on Sunday.

While Carr and Cooper are two big-time talents, they’ve been aided by an underappreciated offensive line. Without much fanfare, the Raiders have assembled one of the league’s more effective groups, especially when it comes to pass protection. Left tackle Donald Penn, cut in March 2014 from a Tampa Bay team that experienced some of the worst tackle play in football last season, has found new life in Oakland. Last year’s third-round pick, Gabe Jackson, is blossoming into a stout left guard, and newly signed center Rodney Hudson has been a welcome addition.

Through three games, no quarterback in football has been pressured less often than Carr (13 percent of his dropbacks). The importance of that has been twofold. First, it’s allowed the Raiders to avoid some of the issues Carr dealt with in college when faced with pressure. And second, it’s given Musgrave the chance to utilize plays that rely on slower-developing route combinations to create space.

This is a throw that’s eventually going to find Cooper, who’s not even in the frame yet, over the middle of the field. It’s a crossing route that started with tight end Lee Smith on the left side and Cooper lined up wide to the right. Carr waits until Smith has completely made his way across the field before unloading, and with the area vacated, it’s an easy toss to Cooper that goes for 40 yards. There’s nothing complicated about that play, but it’s possible only because halfway into it, Carr has a completely clean pocket with which to work.

Protection, space creation, and the wonder of Cooper all have played a role in why Carr has looked this good through three games, but in the end, his appeal still lies in his ability to make throws that few others can. The touchdown to Seth Roberts on Sunday was a beautiful touch pass on a well-designed out-and-up near the goal line, but his best throw of the season may have been on a play that came up just a yard short against Baltimore last week.

Andre Holmes deserves credit for somehow holding onto this ball — a 25-yard strike through traffic. The most impressive part of it is that Carr actually bobbles the ball and still manages to stick it on Holmes a quarter of the way down the field.

It’s the sort of throw that’s impossible to ignore — a combination of arm strength, release, and accuracy that doesn’t come along often. The faults that sent Carr into the second round a year ago haven’t disappeared, but they’re slowly giving way to the rare traits that set him apart. As a rookie, Carr always needed an offense that provided an ideal set of conditions to show off his talents. Right now in Oakland, he’s getting that in the form of abundant protection and a soon-to-be star at wide receiver. There’s a long way to go, but after years spent stuck in the mud, at least the Raiders are finally going somewhere.

'The Ropes' Podcast: Oscar De La Hoya on His Hall of Fame Career