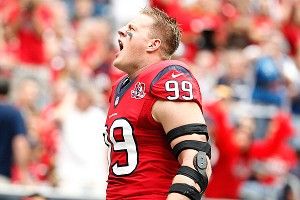 Eight weeks in seems as good a time as any to figure out who’s most deserving of this season’s yearly awards in the NFL. The phrase “most deserving” is the important one here. The list that follows isn’t a prediction of who I think will win (In order: Matt Ryan, Peyton Manning, J.J. Watt, Robert Griffin III, Luke Kuechly) but who should. Fifty-five times, the AP has voted on the league’s best player, and 37 of those times it’s been a quarterback. Only two defenders have ever won — Alan Page in 1971 and Lawrence Taylor in 1986. Considering kicker Mark Moseley has one more MVP award than Jerry Rice, it’s probably safe to say that the right guy doesn’t always take it home. With that in mind, here are this year’s winners.

J.J. Watt, defensive end, Houston Texans
Twenty-six years have passed since a defensive player was named the MVP, and even that year, it took a 20.5-sack season from one of the five greatest players ever. Saying Watt is the MVP (or really, anyone who’s not Quarterback With the Best Numbers) incites a discussion about “value.” The nature of the quarterback position means that losing Matt Ryan could arguably be more devastating than losing Watt. I’d argue that conclusion isn’t as clear-cut as it might seem.

Houston is one of the best teams in football not because of its offense, but because of its defense. Arian Foster’s production has been mostly a product of volume rather than skill (few running backs in the league have broken fewer tackles or done more damage after contact), and Houston’s drop-back passing game is still its most glaring weakness. It’s been Wade Phillips’s unit that has driven the Texans’ 6-1 start, and it’s Watt who’s been its best player, by far.

Watt is affecting games like few interior defensive linemen ever have (as an end in a 3-4, rarely does Watt ever line up wider than head-up over the tackle). It doesn’t matter where he lines up or what type of play it is — Watt has to be accounted for on every snap. He’s combined his league-leading 9.5 sacks (a ridiculous feat for a player who never rushes off the edge) with a ton of stops in the run game. That would be enough for one of the better seasons for a defender in recent memory. The pass deflections are what make this year historic. Watt is tied for sixth in the NFL with 10, and four of those have been intercepted. His ability to read the quarterback’s eyes means that he makes an impact on almost every passing down, no matter what type of rush he puts together. Simply put, no matter your definition of “value,” Watt has been the best player in football through eight weeks.

Peyton Manning, quarterback, Denver Broncos
It’s probably not fair for the Saints defense to be involved in swinging this from Matt Ryan to Manning, but that’s where we are. What Manning has done over the past four games (1,289 yards and 12 touchdowns) has been downright silly. Denver has handed its offense over to Manning, and the results have been everything John Elway could’ve hoped when signing Manning this spring. Peyton has completely transformed everything the Broncos are, and watching him constantly get Denver into the right plays, it’s impossible not to think back to his dominance in Indianapolis. The arm-strength concerns aren’t totally alleviated, but Manning has been able to adjust just enough for them to be inconsequential. Denver’s offense may be the best in football right now, and it’s for one reason.

Ryan’s snubbing is mostly a product of my not being sold on the 7-0 Falcons. Ryan has been excellent, and the Falcons offense has been typically dangerous. But as Bill Barnwell wrote earlier this week, Atlanta’s start has more to do with its improvement on the defensive side of the ball.

Cameron Wake, defensive end, Miami Dolphins
Recently, it’s been standard for different guys to win the MVP and Offensive Player of the Year awards. So because I want an excuse to talk about Wake, I’m going to do the same.

With the way Von Miller has played all season, this wasn’t an easy one, but Wake’s lack of an edge-rushing complement gives him the slight advantage. Watt may lead the league in sacks, but Wake has been the best pass rusher in football. According to Football Outsiders, Wake led the league in combined quarterback hits and hurries last year, and Pro Football Focus’s data has him on pace to do the same in 2012. At 6-foot-3 and 250 pounds, Wake is essentially the perfect outside edge rusher. He’s quick, strong, uses his hands well, and is just short enough to easily gain leverage on the power-forward-sized tackles throughout the league. Wake is by far the best player on a Dolphins defense that has kept them afloat for a playoff spot.

Miller has been everything the Broncos could have hoped when they took him second overall out of Texas A&M a year ago. His natural ability to shed blockers and get to the quarterback is almost incomparable, and no matter what Denver seems to ask of him, he’s been able to produce. Charles Tillman is enjoying what may be his best season in an often-undervalued career, and even without all the touchdowns, he’s been a shutdown cornerback who has allowed the Bears defense to play with fronts and pressures the staff is comfortable with. Geno Atkins has built upon his breakout 2011 season with seven sacks in his first seven games. No interior lineman (aside from J.J. Watt) is as consistently disruptive, and it may not be a stretch to say that Atkins is the best pass-rushing 3-technique tackle since Warren Sapp.

Robert Griffin III, quarterback, Washington Redskins
The Luck-Griffin battle will rage on for as long as each continues to produce like they have so far. Count me on the Luck side of things when it comes to whom I’d rather have long-term, but this year, Griffin has been the more dynamic of the two. His ability on the ground is great, but it’s been RG3’s efficiency as a passer that’s been so impressive. Washington’s loss to the Steelers is the first game all season in which Griffin completed less than two-thirds of his passes, and his completion percentage still stands at 66.8 percent for the season. Even if those numbers are a bit inflated by the high-percentage throws afforded by the play-action nature of Washington’s offense, there have been enough NFL-type passes to inspire confidence that if and when opponents solve the Shanahans’ newest riddle, Griffin will be able to settle into whatever playbook lands in front of him.

Each of the other top-five skill position players from this year’s draft have shown exactly what it was folks saw in them coming out. Luck is just about everything Colts fans could’ve hoped for, and Trent Richardson has been as impressive as any rookie running back since Adrian Peterson.

Chandler Jones, defensive end, New England Patriots
On draft day, I figured that Dont’a Hightower and his ability to play anywhere and do anything would make him the standout rookie in New England, but it’s been Jones who’s provided the Patriots with their best defensive draft pick in some time (that includes Jerod Mayo). Jones has provided the pass-rushing force that New England has been desperate for, but he’s also been a far more effective run defender than a rookie edge rusher has a right to be. The Pats haven’t had much luck drafting on that side of the ball lately, but it seems like they really hit one here.