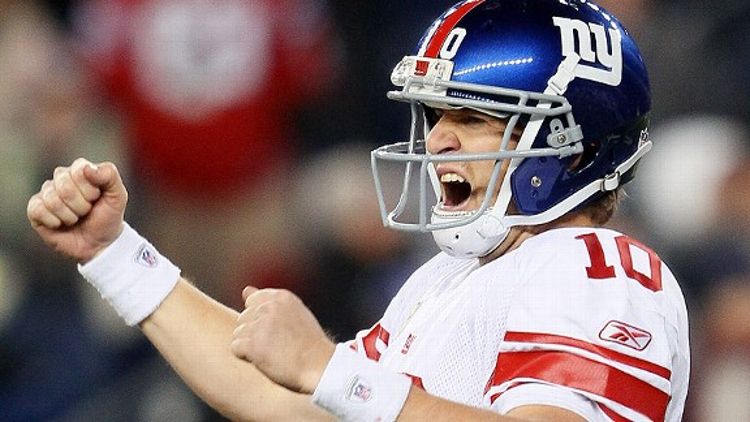 For football fans, writers, and broadcasters, pushing the Super Bowl XLII rematch angle in the week leading up to Sunday’s Giants-Patriots game was like smoking that forbidden cigarette: it was easy, it was accessible, it gave that quick, heady rush, and it probably felt a little bit dirty afterward. And with their comeback 24-20 win over New England, the Giants — who must have been pretty sick and tired of being repeatedly asked about a game that took place almost four years ago — seemed to resort to that favored tactic of disciplinarians everywhere: “Oh, you want a cigarette, do you? Well, you’ll sit here right now, mister, and chain-smoke the rest of the pack.”

The comparisons were impossible to ignore. There was that victory drive that put an end to a historic streak. There was that pass, again to a non-star wearing jersey no. 85, again hauled down in barely-there fashion, again nearly picked off, and again with just under a minute to play in the game. There was that game-winning touchdown to the back left of the end zone. And there were those waning nerve-wracking seconds in which there remained a chance the Patriots would answer the drive with one of their own.

This was a big win for a team whose injury report continues, week after week, to be gruesome. This game was played without team-leading rusher Ahmad Bradshaw, team-leading (before this weekend) receiver Hakeem Nicks, and center David Baas, the Giants’ biggest acquisition in a tepid offseason that left many — yours truly included — unimpressed. They defeated a Patriots team that had won 20 straight regular season home games. After losing some of their best third-down options, like Steve Smith and Kevin Boss, in the offseason — and looking like it — New York got a huge performance from tight end Jake Ballard, who hauled in two of two third downs on the Giants final drive alone.

And the Giants, hopefully, put an end to the most annoying “story” of the season — the one where Eli Manning had the gall to express confidence in himself. (The only quarterback making cringe-worthy pregame statements was on the other side. Does Tom Brady always make that weird doofus-y face when he’s cracking hilarious jokes?) For all the talk of the game being a Super Bowl rematch, it more so had me thinking of the last time the two teams played in the regular season, a game that remains the most fun one I’ve ever seen live. New York lost to give New England their 16-0 season, but it also gave Giants fans a surprising realization: that for all his pick-sixes and shrugged shoulders, Eli Manning could lead a pretty good late-game charge. He’s had a few more where that came from since then.

Look — and it might be hard to tell from the locker room footage showing a giddy Big Blue celebration that included Brandon Jacobs hoisting Tom Coughlin up in the air — it was still only Week 9. The Giants are an NFC East-leading 6-2, yes, but they’re not, by any stretch, some sort of lock. For all their own problems, the Dallas Cowboys are right there behind them at 4-4; the teams will face each other twice in the final four weekends of play. New York still has San Francisco, New Orleans, and, gulp, Green Bay on its schedule. As Coughlin reminded his hopped-up team: “Humble in victory.” Let’s not forget that this motley crew lost to the Redskins and Seahawks, and barely managed to eke past the Cardinals and Dolphins. No one ought to get too wound up here. We’re barely into November.

Still, Giants fans would all be forgiven for forgoing the usual jittery cigs for a puff of something stronger, like a victory cigar. Anyone got a light?

Previously From Katie Baker:
Goalies of the Week
The Rise of the Female Distance Runner
Benching Ovechkin
Growing Up With Pat LaFontaine