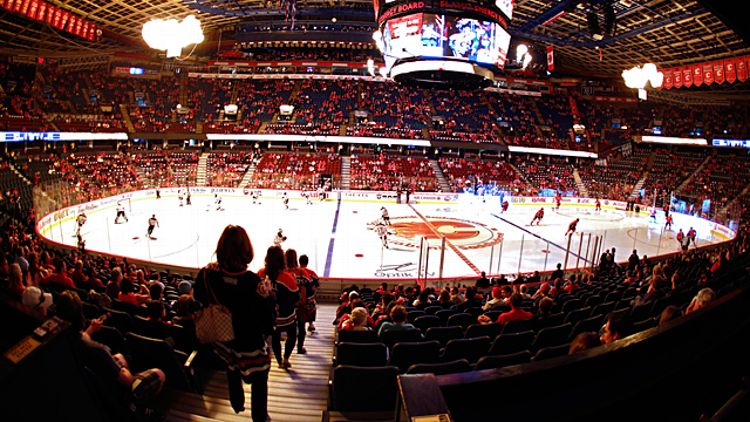 The NHL exhibition season has begun, which means in some sense, a new year of hockey has finally arrived. So it’s apparently time to come up with a few New Year’s resolutions — those little things we could all do to make ourselves better fans.

After all, is there anyone in the hockey world who can really claim to already be perfect? Oh, right, this guy. Man, he ruins everything. I hate him. [Adds “stop being jealous of perfect people” to personal resolutions list.]

But the rest of us still have room for improvement, and now seems like as good a time as any to work on it. So here are a few suggested New Year’s resolutions for hockey fans to consider. Pick one or two. Pick them all. Or pick none of them and just berate me in the comments. [Adds “stop being thin-skinned about the comments” to personal resolutions list.]

Wait, where were we? [Adds “stop overusing that distracting third-person device” to personal resolutions list.] Right, the resolutions. Here are 10 suggestions for your consideration.

Let’s try to go easy on the steroid speculation

It’s an Olympic year, which means any players picked to go to Sochi will have to be drug tested. And let’s just say that IOC drug testing is slightly more comprehensive than the NHL’s system.

So if you were an NHL player who dreamed of playing in Sochi but happened to be dabbling in the occasional PED use, you’d probably think twice about continuing that this year. And that fact will no doubt lead to all sorts of rumors and speculation for any potential Olympians who get off to a slow start this season.

We went through this four years ago — Alexander Ovechkin was a popular target — and there’s no doubt the subject will come up again this year. Under its current testing program, the NHL has suspended a grand total of one player for PED use. In a league in which strength and endurance are crucial, common sense says that somebody out there must be getting away with something.

But while there’s little doubt that some players probably are cheating, it’s also true that everyone goes through an occasional slump. So when some NHL star struggles through October, let’s let him get a week or two into November before we go full Pujols.

Unless he’s already an established superstar and/or plays for the Sabres, the player often has little choice but to back down, make the best deal he can, and then hope he can play well enough to really cash in down the road.

Meanwhile, a decent unrestricted free agent has the option of just waiting until July 1, listening to offers from all 30 teams, and almost inevitably finding at least one who’ll give him way too much money for way too many years.

Those two situations are very different. So let’s stop comparing the contracts that RFAs sign to the ones that UFAs get. This is a cheap trick that’s often pulled after a pending UFA signs a massive extension, which is inevitably compared unfavorably to other “similar” contracts that aren’t really similar at all because they were RFA deals.

In fact, speaking of pending UFAs …

Does your favorite team have a pending UFA or two? Want a little spoiler on how that’s going to work out? Lean in close, because here’s the scoop … He’s going to get way more than you thought he’d get.

They always do. The salary cap will keep going up, the new eight-year max on extensions will push annual salaries higher, the ban on front-loading will push cap hits higher still, and if you could hook him up to a lie detector, the typical NHL GM would admit he just doesn’t care about his team’s cap situation in 2020 because he knows it won’t be his problem. No matter how bad you thought the last UFA extension was, the next one will be worse. Just accept it.

And yes, that whole paragraph was just a thinly disguised message to the future-me once Phil Kessel gets his extension. Which I will still freak out over, by the way. I hope you enjoy the 10,000-word post that goes up eight minutes after he signs, since I already have it 90 percent finished.

They’re getting set up. Seriously, just let them get set up. Let them work the puck around a little bit and then I promise you, they will shoot. Until then, please stop yelling in my ear.

(Note: Yelling “shooooot” at the end of a period even though there are 15 seconds left will still be fine. After all, we need to hold on to some traditions.)

Don Cherry is, to put it kindly, divisive. He’s been called everything from a hockey legend to xenophobic to a dinosaur to the seventh-greatest Canadian of all time.

He’s also been doing essentially the same shtick for the better part of four decades. At this point, you either like him or you don’t and you’re unlikely to change your mind, because nobody’s opinion on Cherry has actually changed since 1992. So maybe, just maybe, we could all try to resist the urge to rabidly share our opinion of Cherry every single week.

History tells us that Cherry will probably say something completely outrageous at least once or twice this year, and when he does we should all feel free to flip out about it. But for the run-of-the-mill stuff, where he’s just mispronouncing names and telling you kids to get your stick out of the way and saying “point” a lot, maybe Twitter doesn’t really need your second-by-second analysis of all the ways he’s right or wrong.

(And yes, that means you, too, Canadian sportswriters who all claim to hate the guy and yet inevitably insist that someone turn the volume up in the press box as soon as Coach’s Corner starts.)

Let’s lay off the fans in bad markets

If you cheer for a team in a traditional market, you probably take your share of shots at the fans in less successful locations around the league. I mean, do they even know what icing is? Have they ever heard of any players from the 1990s? Did they get lost on the way to something more popular, like a high school volleyball game?

But the truth of it is, the NHL has great fans in every one of its markets. What it doesn’t have is enough of those fans, and that’s a different issue. You can blame that on ownership, or Gary Bettman, or geography, or history. But you can’t blame it on the fans themselves.

If anything, those fans deserve our support. Imagine being a die-hard hockey fan in a market that barely knew you existed. Back of the sports section. Nothing on talk radio. Bartender looks at you like you’re crazy when you ask if they’re showing the game. It has to be brutal.

So mock the teams if you must. But maybe go easy on the fans themselves.

There are many ways to insult a hockey player. You can go after their talent, their history, their appearance, their hair, their age, their paycheck, their parking tickets, their toughness, their laugh, their ability to work a dishwasher … The possibilities are almost limitless. So shouldn’t we hold ourselves to a higher standard than just settling for “he’s a girl”?

That’s not even some sort of call for civility, because cruelly mocking other team’s star players, with no regard for reality or even basic human decency, is a cherished part of hockey fandom and we should continue to embrace it. It’s just a call for creativity. As hockey fans, we all hate everyone and want to make sure they know it. Let’s see if we can manage to do that without taking down 50 percent of the population in the cross fire.

Let’s start to get our heads around waivers

The concept of waivers pops up fairly often, but if we’re being honest, most fans don’t really understand how they work. There’s just kind of a vague sense that sometimes players moving up or down can be claimed by other teams, and sometimes they can’t, and so we should probably mention the possibility every now and then just in case.

The actual rules about waivers are still so complicated that they can only be fully understood by agents and GMs (sometimes), but fans can at least get a better grip on this than they have now.

For example, you still occasionally hear fans talk about re-entry waivers, under which a player being called up from the minors could be claimed, resulting in two teams splitting the player’s full salary. Re-entry waivers made teams reluctant to call up useful players. But they don’t exist anymore — they were eliminated as part of the new CBA. Now, players need to clear waivers to go down but not to come back up.

Beyond that, remember that new players start off as waiver exempt and then lose that status over time as they accumulate experience (both in terms of years and games played). You don’t need to know the exact formula — it’s complicated — but you may want to bookmark the CapGeek waiver calculator.

We touched on this during the summer, but it’s worth repeating. It’s time to stop using “watch the games” as some sort of catchall dismissal of advanced stats. Advanced stat proponents are already watching the games, and they’re doing it way, way more closely than you are.

An example from this week: Stats like Corsi and Fenwick say the Toronto Maple Leafs are a bad possession team, but the Leafs themselves say otherwise. Corsi and Fenwick measure shot attempts and are just proxies for possession, remember, meaning it’s possible the Leafs could be right. So one Toronto fan sat down with a stopwatch in each hand and rewatched every minute of every Leaf game from the first half of last season. (The results: The Leafs are delusional.)

In other corners of the advanced stats world, fans are reviewing tape to hand-track things like scoring chances and zone entries/exits. You can call these sort of exercises a lot of things. Valuable, almost certainly. Time-consuming, definitely. Borderline obsessive, quite possibly. But if you can tell someone who’s literally spending hours of their spare time staring at game footage that they need to start watching the games, you’re no longer using English words in the same way as the rest of us.

Advanced stats aren’t perfect and there may still be plenty to criticize about the direction they’re headed. But by now we should have hit the point where anyone whose criticism involves saying “watch the games” automatically gets dismissed out of hand.

Let’s stop making a big deal out of anthem singers

Your favorite team has a singer, and that singer has their own set of personal trademarks and idiosyncrasies that are completely fascinating. Let me guess — they even have some sort of patented hand signal! They are the best anthem singer in the world and you feel very very strongly about all of this.

We get it. But nobody else cares. Just sing the song and start the game already.

About Last Night: Rangers Back in the Hunt