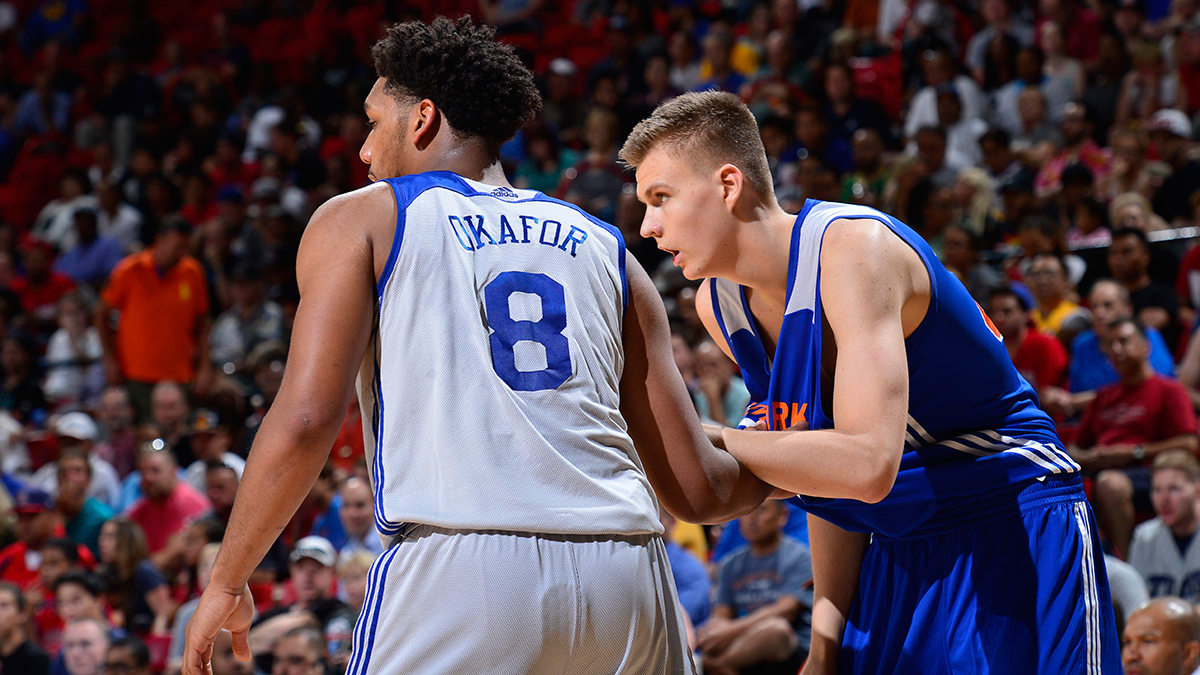 The Shootaround crew is in Vegas for NBA summer league, hoping to catch a rising star. Here are some thoughts through Tuesday’s action.

The Bull and the China Shop 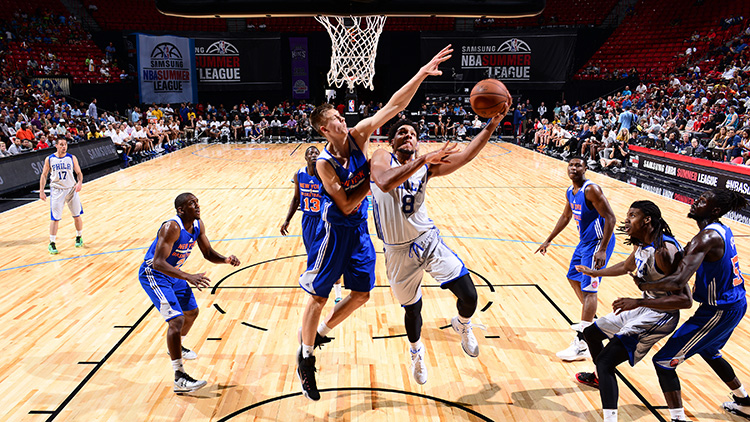 Jason Concepcion: Jahlil Okafor is a low-post bull in the classic style. Broad-shouldered and sturdily built, he’s like a battering ram with the feet of a dancer and hands like well-oiled catcher’s mitts. When he resolves to back a dude down, the defense can either double, foul, or get trucked. All of that bashing creates space for Jah to crack open his toolkit of feints, drop steps, spins, and deft baby hooks. He can face, too, daring defenders to overcome their innate sense of self-preservation to step in front of the bull.

In this metaphor, then, Kristaps Porzingis is the china shop. Everyone on earth knows what Okafor does, and those who don’t only need to watch him for two minutes to figure out which way the wind blows. The thing is, china is useful too; just not as a deterrent to a raging bull. Or, at least, not that we know of.

In the Sixers-Knicks summer league matchup on Tuesday — especially in the first half — anytime Porzingis found himself in the paint, he looked like a lone tube sock getting spun around a clothes dryer. Okafor ruined the Latvian down low, bullying him deep under the basket with contemptuous ease. All Porzingis could do was go along for the ride or foul. And so he fouled. And not because that was the plan. Porzingis had four personals in the first half, and seven for the game,1 most of them the result of his matchup with Okafor.

In the second half, though, Porzingis made a decision: Perhaps the best way to keep the bull out of the shop is to lock the door. Instead of trying to meet Okafor’s strength with his own, Porzingis switched it up and began fronting, denying entry passes with his length.

“He’s a 5-man; I’m a 4-man,” Porzingis said after the game. “He’s really strong. He’s really skilled with the ball, so it’s hard to contain him. So, in the second half, I tried to play more aggressively so he couldn’t receive the ball.”

Was that the coaches’ idea?

Okafor ended the game with 18 points and six boards, but for all of his strength, his ground-bound style leaves him vulnerable to length. Porzingis had only nine points on 3-of-5 shooting with three rebounds, but he blocked three shots, all on Okafor.

“He’s a top draft pick for a reason,” Okafor said after the game. 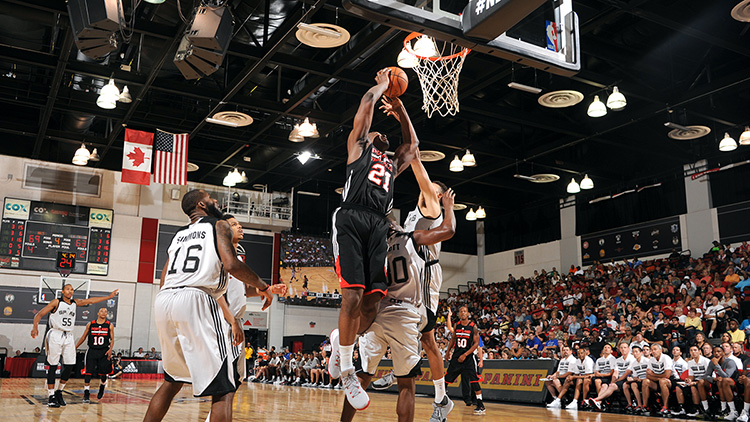 Danny Chau: I watched a 16-year-old Noah Vonleh walk on water three summers ago. In the final seconds of the 2012 Adidas Nations tournament championship game, with Vonleh’s team down 84-83, teammate Emmanuel Mudiay (you may have heard of him) got into the lane, spun right into a double-team, and kicked it out right as the two defenders converged. The ball landed in the hands of Vonleh at the top of the arc. He drilled the game-winning 3. It capped a 25-point, 16-rebound performance that led to shared tournament MVP honors for Vonleh and Mudiay. Back then, Vonleh was a scrawny 6-foot-8 tweener in the Antawn Jamison mold. That night, in front of a row of scouts and intrigued media, he was a supernova.

Fast-forward three years and Mudiay is a summer league darling. Vonleh got into the mix, too, in yesterday’s early game against the San Antonio Spurs. He had 20 points — more than he’d scored in any of his 30 games at Indiana University — and eight rebounds, leading the Blazers in a close 79-75 loss. He put the full repertoire on display, showing some semblance of a Eurostep on two occasions and getting himself wide open with a mesmerizing ball fake for the Blazers’ only 3 of the game.

Vonleh — with his 6-foot-10 frame, 7-foot-5 wingspan, and a caboose the size of the Cayman Islands — is a project on a Blazers front line full of them. He was traded by the Hornets (THE HORNETS!) after only one inconsequential season. We don’t have to accept his performance as anything more than happenstance. He did it against the Spurs, though. There may not be much in terms of meaning here in Vegas, but there’s plenty of poetry to be found. 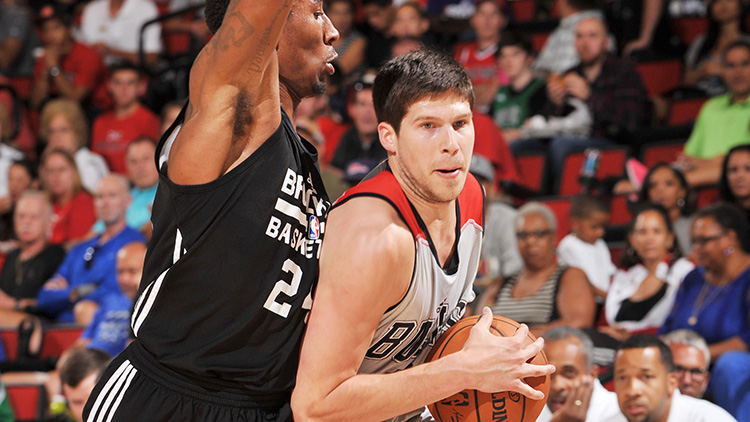 Chau: During the 2012 summer league, fresh off an impressive playoff run as a rookie, Kawhi Leonard was initiating fast breaks off rebounds for the Spurs and scoring as the handler in the pick-and-roll. In 2013, you could find Meyers Leonard regularly attempting NBA-distance 3-pointers for the first time in his career. Looking back, summer league can often be seen as the starting point — the place where untapped potential begins to round itself into career-defining skills. Kawhi Leonard is one of the game’s most dynamic wings; Meyers Leonard is the league’s most unlikely marksman.

The player finding himself, and finding a new role, in this edition of summer league is Doug McDermott. He’s made only one 3-pointer the entire week, on 10 attempts — this from the guy who was supposed to be the best shooter in the 2014 draft. McBuckets has, ostensibly, been playing the 4, scoring most of his points on angular drives to the rim and sharp moves down in the post. His utility as a draft prospect was obviously linked to his ability to space the floor, but he’s made his living playing like his own theoretical inverse. At 6-foot-8, McDermott doesn’t have ideal size for the position, but he can jump high, which helps. He isn’t particularly fast on the perimeter, but down in the post, his scoring instincts take over, and his quick spins and fluid footwork can catch a lot of bigs off guard.

It’s a strange way for McDermott to reinvent himself — to essentially step into a Wayback Machine in order to rebuild the success he’s seen his entire life. But versatility is the name of today’s game, and Fred Hoiberg would be shirking his duties if he didn’t find as many ways to get McDermott as involved as possible. McDermott’s success will still come down to whether last year’s horrid shooting numbers were an aberration. But the more comfortable he gets down in the trenches, the closer we might be to seeing McBuckets rise from the elephant graveyard Tom Thibodeau left in his wake.

What It’s All About 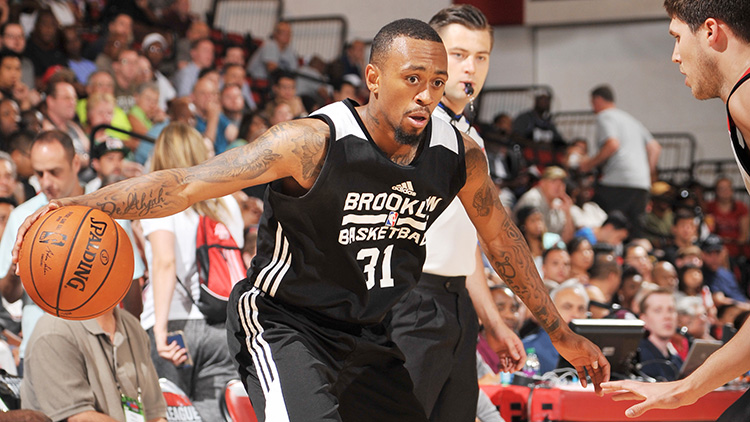 Andrew Sharp: You’re watching summer league. Bulls-Nets. There’s Doug McDermott over there; he looks solid. Nineteen points, OK. Bobby Portis; he’s impressive. Nine points, 10 boards, looks quick, but strong, too, and he can shoot. Where’s Rondae Hollis-Jefferson? Oh, there he is. Wish he hadn’t gone to Brooklyn. Damn. The Nets are where fun draft picks go to disappear. Bulls up 10 after that Tyrus McGee layup. One minute left. This game’s over. But did this game ever really happen? Who’s Tyrus McGee? Wish we could simulate the rest of this.

THAT’S WHY THEY BROUGHT HIM HERE.

That’s the real shit. I’d forgotten why I came to Vegas until Boatright reminded me. There are a lot of power players at summer league — executives, coaches, superstars, Porzingis, World Wide Wes, that guy in the Kelenna Azubuike jersey — but don’t ever forget that the real, true gods of this place are right there on the court. McDermott never stood a chance. The soul of Cox Pavilion belongs to Boatright.