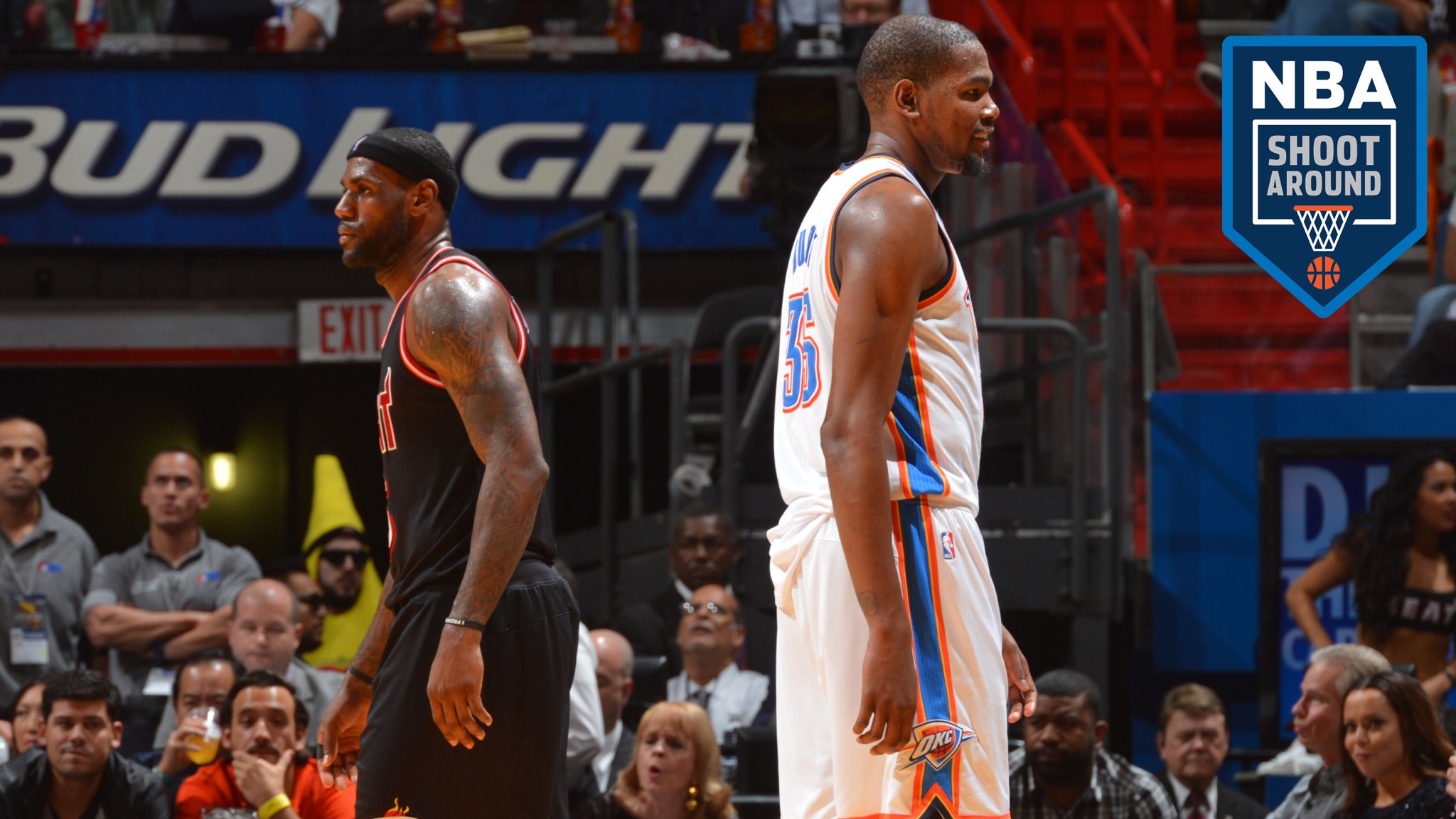 “Rucker Park, That’s What Was Going Through My Head”

Jason Gallagher: Something hit me around the middle of the fourth quarter. I was leaned back in my recliner, eating my Oreo Ice Cream Sandwich and browsing my phone for interspecies fights on YouTube. While all this was taking place, Kevin Durant was on my television putting up 33 points on 52 percent shooting, as he completely destroyed the Heat defense in a blowout win in Miami. Wow! What an incredible feat! This is the stuff kings are made of  … NO …  superheroes are made of … NO … GODS ARE MADE OF!

Kevin Durant has made me basketball spoiled. What the hell is wrong with me? How could I have become disillusioned by a 33-point, seven-rebound, five-assist curb stomping against the defending champions, on their home floor, with one of the best players we’ll ever see in our lifetime shadowing his every move? Hell, I should be going door to door, attempting to convince people to give their lives over to Kevin Durant at once. Instead, I’m sitting in a chair that leans back for me (because it has become too hard to do it myself) while indulging in a colossal sandwich made of ice cream and mammoth-size Oreos, watching a three-way battle between lions, crocodiles, and wildebeests. What a life of excess. I’m disgusted by what I’ve become.

So, while I’d like to thank Kevin for showing me the light with this untouchable streak he’s on, I’m also placing the blame on him for creating this spoiled, rotten, pampered little child who’s found himself unimpressed by a 33-point game. My soul needs saving. 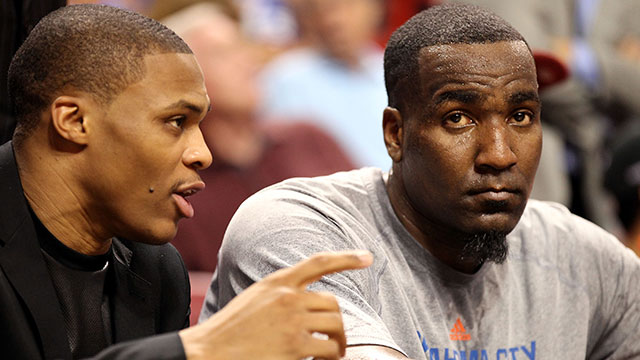 Jared Dubin: Scotty Brooks finally did it. After two solid years of the entire Internet begging him to bench Kendrick Perkins against the Miami Heat, he finally pulled the trigger. And wouldn’t you know, it worked like gangbusters.

Perk is fine if you’re looking for someone to scowl and swagger his way around the paint, but he’s hilariously ill equipped to guard versatile bigs like Chris Bosh.

Before last night, the Heat and Thunder had played seven games since the start of the 2012 NBA Finals. Seven games times 48 minutes per game equals 336 minutes. Of those 336 minutes, Oklahoma City had played 165 of them with Perkins in the floor. In those 165 minutes, the Thunder were outscored by 45 points.

In the first five minutes of last night’s game, the Thunder were outscored by 13 points, all with Perkins on the floor.

When Perkins exited the game with 7:24 remaining in the first quarter, Oklahoma City was trailing 15-2. Perk never checked back in, and all OKC did in his absence was outscore Miami 110-82.  It was a great accomplishment for armchair coaches everywhere.

The most surprising aspect was Brooks actually sticking with the Perkins-less lineup throughout the game, especially given his usual lineup predilections. He’s been loath to go small or change his starting lineup in the past, but his break from convention paid off in a big way.

The next step is finding a way to convince him that Derek Fisher’s five 3s were more fluke than trend, but that’s a mission for another day. 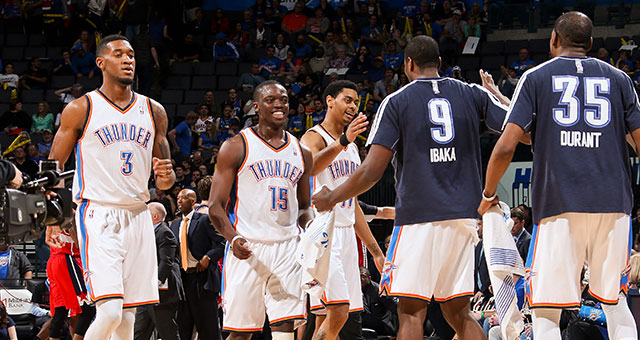 Brett Koremenos: Reggie Jackson, Jeremy Lamb, and Perry Jones combined to play a little over 95 minutes in last night’s demolition of the Heat. Lamb’s contribution — 18 points and four assists on 7-of-10 shooting — basically accounted for the difference between the two teams. That stellar performance aside, two important things stand out about the aforementioned trio: All three are 23 years old or younger and all of them are still on their rookie contracts. For a team with a return to the Finals in their sights, relying on three (four if you include rookie big man Steven Adams) unproven kids to fill important rotation spots is a dicey proposition. Thanks to their performance against Miami last night (with a little help from Derek Fisher), it looks like a gamble that’s paying off.

It also stood in stark contrast to their opponents’ team-building philosophy.

Since Dwyane Wade, LeBron James, and Chris Bosh have teamed up in South Beach, Miami (partly because of trades) has mainly stuck to the philosophy of snagging veterans off the scrap heap to fill out its rotation. The logic is pretty clear. Veteran players, no matter how mediocre, are far more reliable, night in and night out, than untested youth. A team put on the fast track to contend for multiple titles can’t afford to waste time with youngsters. When you have Wade, James, and Bosh to carry you, just get guys around them who won’t screw up. Two straight titles is proof this method works — in the short term.

But the Mike Bibbys and Mike Millers have already been shown the door, and Ray Allen, Shane Battier, and Udonis Haslem (who has fallen behind even Rashard Lewis and Michael Beasley in the rotation) are showing their age in varying degrees. Last night against their young counterparts, Battier and Allen combined to go just 2-of-9 from the field. Allen was also minus-24 in his 31 minutes.

That is why this clash of philosophies on display last night is so interesting. For the rest of the season (and perhaps beyond), the Thunder will be wondering if their new recruits flanking their star(s) are good enough. The Heat, on the other hand, will be hoping their savvy vets simply have enough left.

Tell Z-Bo How You Really Feel

Ryan:  I guess the thing to talk about here is Z-Bo getting posterized. So go ahead. I’ll wait in the car. No, I promise, I’ll keep the car running. You said it on Twitter, so it should be really easy. Go up to Z-Bo, tell him he’s dead. Just read your tweet, it was great, it got favorited twice, which means it outsold the collected works of James Thurber! You are a modern humorist! Tell him: “Z-BO RIP RUDY GAY IS THE GUY PUTTING ANTLERS ON HIM.” Go do it! We’ve got Obamacare. You’re going to be fine. They can do amazing things with plastic surgery these days. Why are you still sitting here? Oh, you just want to go to Sonic instead of telling Z-Bo he’s dead? OK! Your call! 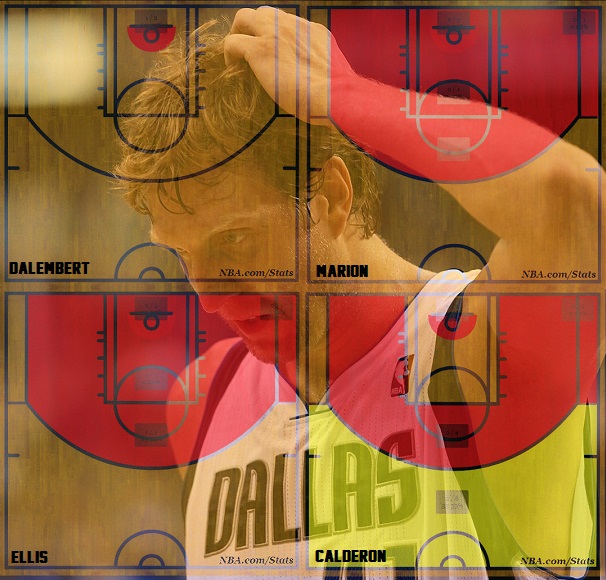 Gallagher: The Mavs did just about everything they could to make their closing arguments for why Dirk should be an All-Star.

Nowitzki did it the old-fashioned way against Houston by putting up a young man’s 38 points on 13-21 shooting, with 17 boards to add.  All this while becoming the 13th player in NBA history to reach 26,000 points.

The rest of the starting lineup took a more unorthodox approach. They went with the ol’ “look at the shit he has to work with” trick by combining for 22 points on 9-34 shooting with a grand total of 14 rebounds.  You saw that right. A 35-year-old man, who at times looks like he has a vertical of two inches and is running with knives in his legs, out-rebounded the rest of his starting lineup by three boards.

Chandler, What’s Gotten Into You? 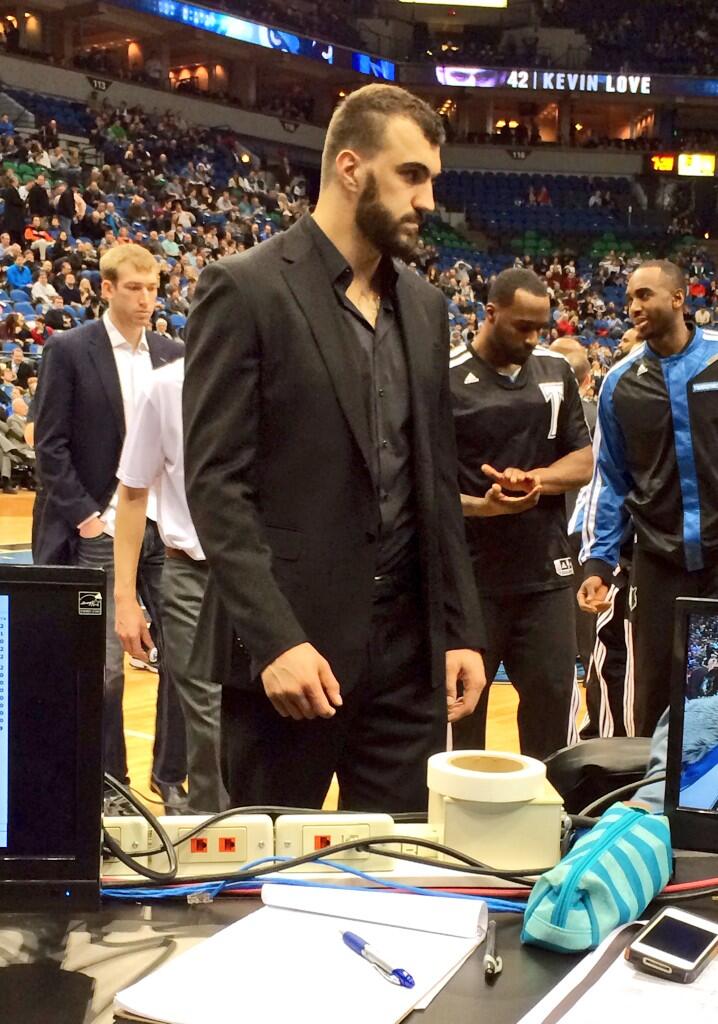 Steve McPherson: In just a couple days, David Stern is stepping down as NBA commissioner. The retrospective pieces on his legacy have been coming for a while now, detailing the league’s growth in terms of revenue, number of teams, and market share. But surely one of his most enduring contributions to the league has been the dress code, which mandates that players wear “business” attire when conducting official NBA “business.” Into the vacuum left by all those throwback jerseys and saggy jeans stepped fairly normal clothing — at first — and then increasingly outlandish attire.

But if the unstated goal of the dress code was to make players appear less threatening, it has failed completely in the case of Nikola Pekovic. When Pek is in jeans and a T-shirt with a hoodie thrown over it, he’s still imposing, but in a casual, teddy-bearish kind of way. But his predilection for black-on-black shirts, slacks, and jacket on the bench — enhanced by subtle touches like the tattoo and gold chain just visible at his open collar — make him look like he’s auditioning for Taken 3, starring the incomparable Liam Neesons, or like he’s about to beat the living hell out of Jack Bauer in a dank gulag. 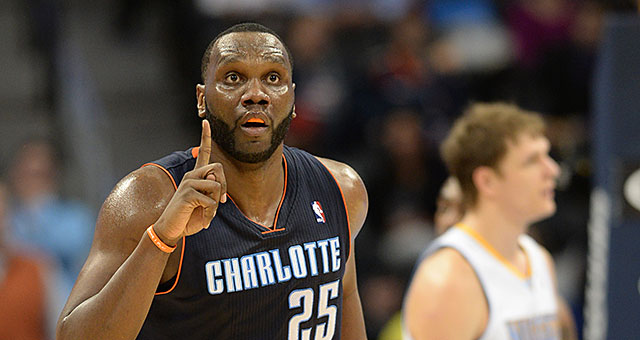 Danny Chau: Last night, Al Jefferson tied his Bobcats high in points with 35 against the Denver Nuggets. He also tied a franchise record for most consecutive 20-plus-point games; he’s currently sitting at 10, sharing the distinction with Jason Richardson, whose 10-game streak is now six years old. I think I can say this with confidence: Jefferson is simply the greatest offensive player in Bobcats history, past or present (there is no future).

The Bobcats are playing .500 ball in their last 10 games. During that stretch, the team played six games decided by six points or fewer, and won three of them. In most contexts, that’s not a noteworthy figure. But we’re talking about the Bobcats here, whose near-infinite number of soul-rending blowout losses is matched only by the number of times they’ve found new ways to lose close games. It’s no coincidence that the Bobcats’ relative success in clutch situations recently has overlapped with Jefferson’s torrid output.

Sometimes, when conditions are perfect, a team’s primary offensive option reflects the greater ethos of a franchise, a city, a fan base. Kobe’s picturesque fallaways are prepackaged for big-screen adaptations of his on-court legacy. Melo at his best transcends the curse of the Dolan era, and at his worst reminds you that those mid-aughts Knicks squads aren’t as far off in the periphery as you once thought. In their final year of existence, the Bobcats have found their perfect match in Jefferson.

If you’re watching a Bobcats game, you’re not expecting explosions. You’re watching because you’re either a sadist or you have an undying belief that sticking with a process will yield incrementally favorable results. No one expects an Al Jefferson explosion, but over the course of 48 minutes, that old-school footwork, so strangely alluring it can only really be described as post-sexy, starts working its magic. Suddenly Big Al’s got another double-double, and suddenly the Bobcats are in pretty good position to win. That’s an incredible reality for the Bobcats, considering their past. Given enough chances, with a player as uncannily consistent as Jefferson is, the Bobcats might just make something relatively special out of this season.

“I want to stay here, yes,” Martinez said. “But they have a lot going on. They have Scherzer; they have Miggy.”