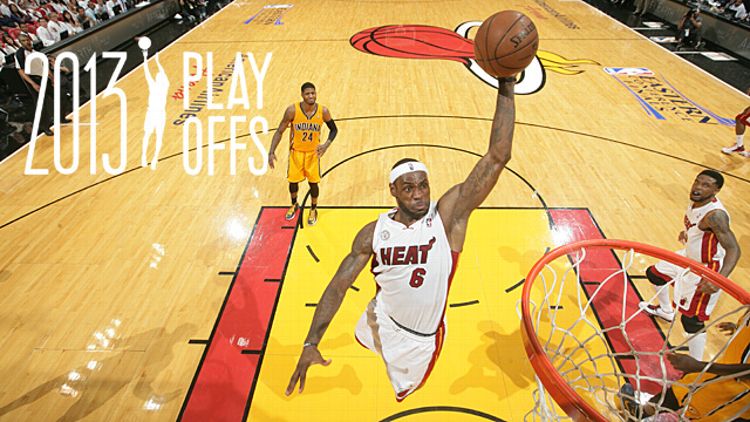 I kept replaying the video over and over again, but every time I paused, backtracked, and pressed play, LeBron would already be a step away from the hoop, about to win the game for Miami. I wasn’t looking for the result, obviously. I was looking for anything that could help explain how he did it. With the power of DVR and YouTube, I should’ve had the upper hand. But even when I had complete control over his movement, I couldn’t keep up with LeBron.

His game-winning layup was unbelievable. Maybe if he had caught the ball while he darted to the basket after a curl, maybe it would’ve made sense then. That’s not what happened, though. He caught the ball with his body facing away from the hoop. His left leg was planted far out, and he took half a beat, probably less, before making his move. Just as Paul George came up close with a little too much velocity, LeBron turned and bulleted to the hole. The entire play took two seconds. It took LeBron less than two seconds to recognize where George was, where he was going to be, and where his lane would open up once George made the inevitable mistake. Game 1’s fate was sealed (let’s be honest here: with or without Roy Hibbert’s presence) the moment that left leg, planted back behind the 3-point line for leverage, propelled LeBron forward on the drive.

This news cycle will be brimming with criticism over Frank Vogel’s decision to sit Hibbert on the final play, because with LeBron, it’s a lot easier to rationalize what didn’t happen than to rationalize what did. That’s just how we respond to LeBron. It was awfully fun picking at his psyche last season. The convenient narratives helped distract us from the inexplicable wonder of his game. But now those safety blankets are gone. All that’s left is LeBron’s unfettered greatness, which is so omnipresent it’s often taken for granted, like nature. Have you ever tried to explain nature?

Paul George (Almost) Does the Impossible

Andrew Sharp: Paul George’s job before this series got started:

• Be the crunch-time superstar on offense for a Pacers team that badly needs someone who can take over in the final minutes.

• On defense, stop the best player on the planet.

And he did it! He scored 17 points in the second half and another eight in overtime as the Pacers answered the Heat over and over again. There was also that outrageous 3 to send it to overtime and three ice-cold free throws in the final seconds of OT to take the lead. But just as important: He stuck with LeBron the entire night, and if he didn’t necessarily stop him, he definitely harassed him. And maybe even outplayed him down the stretch in the fourth quarter and overtime.

Game 1 saw George reach another level. Anyone who doubted his superstar credentials had to do a double take last night. Having Roy Hibbert helped on the defensive end, but regardless, we’re talking about a guy who just guarded the best player on the floor for 47 minutes, gave the Pacers everything they needed from him on offense, AND hit huge shots in crunch time to keep them alive. There’s no debate anymore, right? Paul George is a superstar. He was unreal.

I say all this up front because the night ended with George overplaying LeBron by maybe 18 inches, giving him just enough room to barrel toward the rim for the game-winning layup. LeBron is just that incredible, and good enough to take any mistake and make it fatal. You get the feeling that if the Pacers have any chance in this series, Paul George has to be perfect on both ends of the court. He wasn’t quite there Wednesday.

But goddamn, he came closer than we thought possible, didn’t he?

Sharp: Assume LeBron will bestow a pair of lensless glasses after the season’s over to officially induct George into the NBA Illuminati, but until then this amazing shirt will have to suffice as our proof that he’s hit another level. Paul George is a superstar now. Fuck the haters.

Chris Ryan: Here we have the one-legged Dwyane Wade finishing at the rim against Roy Hibbert. By his absence at the end of the game, Hibbert’s rep as a rim defender has grown into something akin to prime Dikembe Mutombo mixed with Robert Patrick’s T-1000 character. But reputations are funny that way; they are incredibly malleable things. Just take Wade. His kneecap is apparently staying attached to his body through the joint miracles of physical therapy, modern witchcraft, and duct tape. He doesn’t look like himself, and in comparison to his teammate LeBron James, his 19-6-5 would barely garner a Best Supporting Actor nomination.

But don’t get it twisted; he is still Dwyane Wade. There was a play last night, one that I didn’t have GIF’d (giffed? jiffed?) because I kind of wanted to just remember it (OLD-SCHOOL, BABY). Out of a second-half timeout, James was dribbling at the top of the key. To his right, Wade, guarded by Lance Stephenson or someone who looked like him, took a little hop in the air, and, in three strides, cut to underneath the hoop, where James found him with an inch-perfect pass. Whether it’s the tape, Tim Grover, or goat sacrifice, Wade still has his step. He just doesn’t have that many of them. 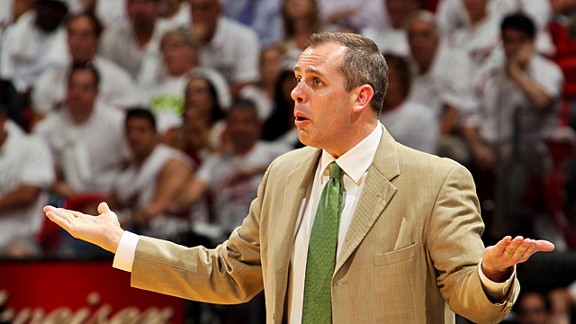 Brett Koremenos: Frank Vogel is going to become the Game 1 scapegoat for his decision to leave out Roy Hibbert — the man he designed his top-ranked defense around — on the final possession, which resulted in LeBron James’s game-winning layup. But before you lay the blame at Vogel’s feet, it’s important to remember, when it comes to basketball strategy, things aren’t always as straightforward as they seem. Unlucky shit just happens, and a huge gray area exists between player error and coaching incompetence.

It’s easy to view James’s layup on a superficial level and come to the conclusion that Hibbert’s absence cost Indiana what would have been a crucial road win. After all, James got to the hoop and the Pacers’ rim protector was out of the game because of the coach, therefore Vogel screwed up, right? That actually couldn’t be further from the truth.

Time, score, and situation dictate so much of the strategy during the late moments of basketball games. With 2.2 seconds on the clock and Miami inbounding on the side, Hibbert protecting the rim was virtually useless. Nearly every time in that situation, the offense’s play will call for some type of quick catch-and-shoot. The defense will be denying the opportunity for a drive, and with the time left on the clock any pass (other than the initial one from the inbounder) is a dicey proposition.

Any good coach, which Vogel is, is going to realize that the opposing team is very likely to run several off-the-ball screening combinations before the ball is even inbounded. The best way to counter that, from a defensive perspective, is to switch everything, because switching defenses are typically only bested by teams isolating against mismatches or slipping their screens. There wasn’t enough time for Miami to do the former, and the latter can be stopped with a potent combination of execution and communication.

This is why Vogel went with a lineup of his five most “switchable” players, or at least the five who had seen game action and weren’t the 5-foot-10 D.J. Augustin. Vogel’s decision to leave out Hibbert gave his team a chance to win — the primary goal of any coach. (The choice to leave Hibbert out with a minute left in OT is a totally different story when you remember that whole time-score-situation thing.) The way to judge a coach (or anything, really) is to evaluate the process, not the result. 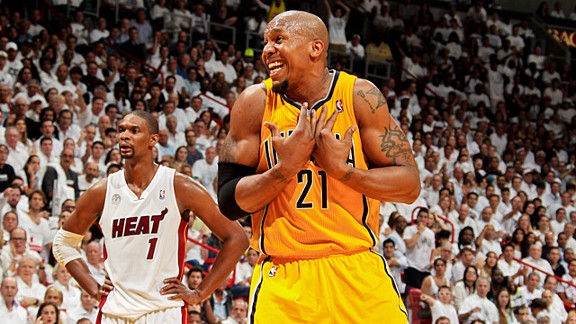 Robert Mays: Because everything about rooting for a sports team is supposed to be agonizing, Steve Kerr did his best to ruin what should’ve been an amazing game last night by comparing David West’s early run of success against the Heat to Carlos Boozer’s relative abominable performance in the last round. It would’ve been an easy thing to shrug off, considering just how unbelievable the rest of the night was, but the moment Kerr planted the thought, it was all I could see every time West touched the ball.

The comparison goes beyond West and Boozer both being 4s who should be able to take advantage of Miami’s preferred Battier-Bosh frontcourt (even though they should). West and Boozer have eerily similar games, up to a point. Both are pick-and-pop power forwards with high-arcing jump shots that bear a notable resemblance (in form; West’s is much better). Both are above-average offense rebounders and ambidextrous finishers. Both have bald heads (sometimes).

Watching just about every catch West made last night, it was easy to imagine Boozer making the same one, whether it was on the block, on a pick-and-roll, or elsewhere. The disparity is in what typically followed. At one point, Kerr even noted this. When West got the ball against Battier on the left block, he turned a shoulder inside and bullied his way to the basket. Boozer, Kerr noted, would’ve likely taken a fall-away jumper. It was almost like watching the same thing unfold over two different timelines — one in which the wrong choice never happens, and one in which it happens often enough to make me throw things.

Paul George put on his All-Star pants for the fourth quarter and (most of) overtime, and although his performance, on both ends, will likely be Indiana’s most important, West’s battle with Shane Battier has to be a decisive victory in every game for the Pacers to have a shot. Like he should’ve been for Boozer, Battier just isn’t big or strong enough to battle West inside, and the result is what we saw last night. The list of Pacers who don’t get enough credit league-wide starts with George, but West is right there with him. By the end of this series, it’s likely both will garner the sort of respect they should’ve had all along.

Chau: Last night, Chris Andersen played the most perfect playoff game in Miami Heat history. This is not up for debate.

You know my dude, as seen in Michael Lewis features in the New York Times Paper of Record Magazine, head-shot photo staring implacably into the future of analytics. To paraphrase Mr. Moneyball, he makes guys score bad. See that steely gaze? That’s the same one he uses when he’s poring over reams of dot-matrix printouts detailing the strengths and weaknesses of his foes while watching SportVU replays on a bank of high-definition monitors. Force so-and-so left. Take this angle over the screen. Who shoots what percentage from where? Lists of players organized by PER, color-coded shooting maps, wingspan, True Shooting, eFG, Win Shares. He streams the Sloan Conference on his iPad, reads analytics forums, and this is what he’s learned: if all else fails, Shaolin falcon tiger knee strike to your man’s nuts. Turns out they all hate that. What’s beyond Moneyball? Balls, money.