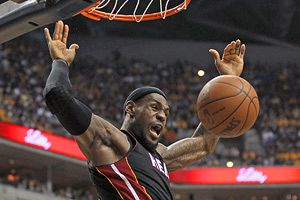 More often than not, when athletes are seen attempting to pump themselves up before a game, they are wearing large Beats By Dre headphones atop their heads and it’s safe to assume they are usually listening to the hip-hops. While nothing is wrong with that, it is worth noting that I can’t think of the last time I’ve seen someone walk through the tunnel with reading material. I’m not saying it hasn’t happened, just that I’ve missed it. I’m sure Grant Hill shows up to the US Airways Arena in Phoenix with a stack of papers he’s grading and a fully annotated copy of A Brief History of Time, but I can’t imagine anyone else using a book as a pump-up tool.

But on Sunday, LeBron changed all of that. This image, captured before Game 4, a must-win for the Heat to avoid going down 3-1, shows LeBron reading the best-selling YA novel The Hunger Games. I haven’t read the book or seen the movie, but I know about the main character, Katniss Everdeen, and have come to the conclusion that she is extremely brave. How brave? Based on a query to my one-stop-shop for answers, , titled, “How is Katniss Everdeen brave?” the answer is “she decided to go into the hunger games instead of her sister and basically risked her life for her sister to have one more year of safety if her name gets called next year.”

Readers' Revenge: Your Most Cowardly Moment