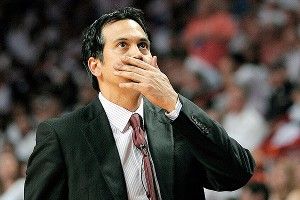 I would like to think that Dwyane Wade’s meltdown is some sort of karmic payback for tossing Mike Bibby’s sneaker. You get back what you give into this world, man. Just so happens that Heat coach Erik Spoelstra got back a little of it, as well. In the third quarter of a game that Wade would just as soon go to the Total Recall machine to have wiped from his memory, the Heat guard missed a few shots and seemingly coasted back on defense while the Pacers were on the break. This bothered the Heat coach and that, in turn, enraged Wade.

The All-Star apparently told his coach to “get out of my [expletive] face.” Afterward, Spoelstra tried to play the whole thing down. “That happens,” he said. “That really is nothing. That’s the least of our concerns,” Wade did little to promote peace on earth and good will toward men. When asked for a comment on his meltdown, Wade simply responded, “no.”

Somewhere Mike Bibby is laughing. And double knotting his sneakers.

Here’s a loop of the moment in question, courtesy of the great .gif master, Jose3030:

The Magic of Duncan and Pop

During Thursday night’s Spurs-Clippers game, as Tim Duncan poured in 18 more points and yet another iteration of a Gregg Popovich team looked unstoppable in May, I came to a conclusion that I’ve been mulling over for the past 10 or so years of Spurs basketball. The most unheralded player and coach of this generation (and probably ever) are, indeed, warlocks.

This is really the only explanation. Tim Duncan is 36. Well, he’s 36 now. By the end of the series, I expect that he will have finished eating Blake Griffin’s heart to restore his youth. Either way, he’s too damn old to have the type of game he did in Game 1. It doesn’t really matter how much rest Pop built in for his aged star over the course of the shortened season. The fountain of youth that Duncan has tapped into (it’s actually a cauldron or chalice of some kind, but ya know … semantics) has been something to behold. Watching him run the high screen with Tony Parker is more than a clinic for the young Clippers big men. It’s a spiritual awakening.

At one point Thursday night, ESPN’s announcing team discussed the changes to San Antonio’s starting lineup since the start of the season. Instead of a guy without any ACLs, they’ve now got a guy who was the butt of every lockout fat joke when the season began. Instead of Manu Ginobili, they’ve got a guy who was the fourth-best player on his college team and couldn’t get off the bench in Cleveland. Parker and Ginobili have proven to be great, but it starts with Duncan and the coach, and this year more than any other is proof.

Nine years ago, the Spurs were a defense-oriented group that won a title by being able to get a stop whenever they needed it. Now, they’re the best transition team in the NBA — even in the playoffs, as the game has slowed down, San Antonio has been nearly flawless in their secondary breaks. The team has transformed into a perfect mix of adept passers and knockdown shooters to complement the penetration and screen-and-roll game from Parker. This could merely be a case of excellent decisions by the front office and historic flexibility from Popovich, but neither seems as likely an explanation than black magic.

It’s also the only way to explain how the media have treated both over the past 15 years. Popovich is the longest-tenured coach in American pro sports. Duncan is one of the 10 greatest NBA players of all-time. We don’t know a single thing about either. The “men of little words” tactic might seem like a personality trait for Duncan and a way to be an asshole for Popovich, but the truth is they’ve both been hypnotizing us all. They’ve used witchcraft to trick us all into letting them become the most successful and least-talked about all-time greats ever, and I don’t know about the rest of you, but I’m not sure I’m OK with it.

Was This the Most Inconsequential Posterization Ever?

It’s nice to know, for all the people in the world who play basketball with a broken hand, that this kind of feat is possible. But, seriously, has there ever been a less important dunk? That’s the Big Fundamental Caron Butler is jamming on there. I think it’s safe to say he fundamentally does not care.

For seven seasons, Danny Granger has labored in the anonymity and irrelevance of small-market Indiana. He averaged almost 26 points a game in 2008-09 for the Pacers, but could stick-up a Manhattan bodega without a mask. “Not for nothin’, he was tall without much physicality,” witnesses told police. Now, competing in the playoffs against LeBron James and the hated Miami Heat, Granger has the opportunity for a defining series. It didn’t begin well. Through two and a half games, he was held to sub-25 percent shooting. On Tuesday, Danny G was outshined by Granny G, an old white lady who rapped on America’s Got Talent.

With suspicions growing that he was a scarecrow of a superstar, Granger used Game 3 to salvage his reputation. After missing four of five shots in the first half, he finished with 17 points, seven boards and four assists. He bullied the shorter Wade in the post and then barked at LeBron — it was more like a yipping Pound Puppy than a Rottweiler, but still — after James slung an elbow in his direction. While Granger is a volume scorer who doesn’t contribute much elsewhere, it was gratifying to see him escape the role of being a charlatan from the cornfields.

An Open Letter to Lob City

Boris Diaw scored 16 points on you Thursday night. The game was televised. We all saw it. Now, clips from the game are on the Internet, forever, so we can watch them over and over again.

If that doesn’t motivate you for Game 3, then nothing will. 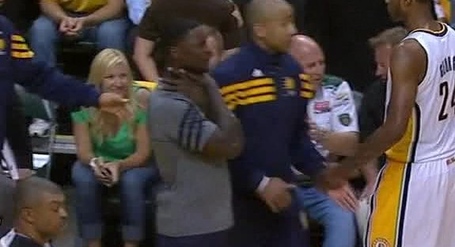 During Thursday night’s Heat-pocalypse, LeBron James engaged in a mild altercation with the reborn Danny Granger. The Pacers forward grabbed James’ jersey before he could airlift on a fast break. Granger and James got in each other’s face and, were this the regular season, might have gone to a scarier place. Squaring off with James, who physically recalls one of the robot punching machines from Real Steel, would appear to be a mistake. However, after Granger was given a technical for instigating the moment, James failed to convert the free throw. In the photo above you’ll see Lance Stephenson, a two-year pro who averages 10 minutes a game and has a grand total of five career playoffs points, making the classic choking gesture on the Pacers bench after James’ miss.

Stephenson has already cemented his Google-ability with the move (seek him out, his fate is sealed), but was it really so wrong? Granger’s jersey-pulling was a similar sort of gamesmanship, a teasing act meant to get in the reigning MVP’s head. On its face, the taunt feels cheap — the sort of thing old-timers call “classless.” This was not the act of, say, a player in the midst of a historic playoff performance that ripped the guts out of this nation’s largest city. But the LeBron James Psych-Out is a movement that needs to be considered in context. Stephenson isn’t going to have to check James on the court any time soon because, well, he isn’t going to play unless his team is blowing out or being blown out. Granger gained a different kind of mental advantage, one that according to sources close to Stephen A. Smith would otherwise have lead to retaliation were this series not on the path to his first NBA championship. It’s of a piece: LeBron’s going to see Stephenson’s move over and again on SportsCenter this weekend. It’s inevitable. But it’s Granger who’s lighting his fire. And he’s probably going to score 79 points on Sunday to go along with 17 elbows to the solar plexus. For that, we thank Lance Stephenson.