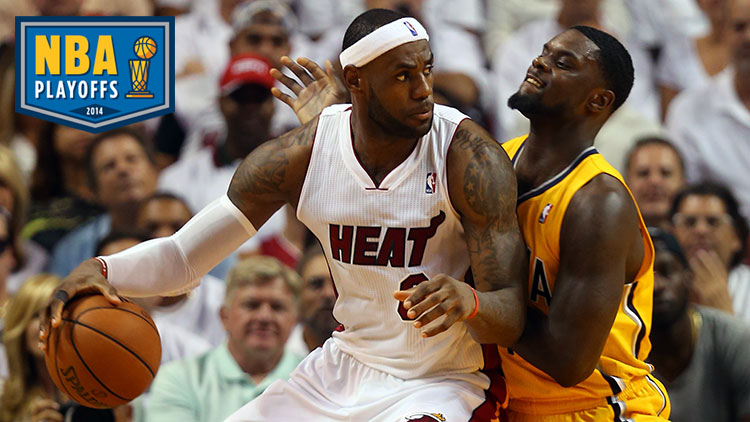 LeBron James is the tiger.

LeBron scored 32 points and grabbed 10 boards on Monday night, putting Miami fully in control of the Eastern Conference finals. Regardless of what Paul George thought (“He’s doing it to the wrong guy. He’s barking up the wrong tree.”), this didn’t have anything to do with Lance Stephenson’s sports psychology. This happened because it is late May. It’s getting hot. So is LeBron.

This is just what he does.

James was aggressive, sure — he went 10-12 inside the paint, had 74 offensive touches (his most in the series), and scored 14 points off drives. But it never felt like he was playing with anything less than complete control. It’s hard to remember now, but there was a time when people wondered whether LeBron lacked the Kobe/Jordan gene — the motivation to answer any perceived slight or sign of disrespect with the settling of all Coreleone family business. Turns out that was a moot point. He doesn’t need the Kobe/Jordan gene. When you can play like that, all you need is the ball.

Watching him dismantle the Pacers, it was hard to remember that debate at all. It’s like Shane Battier said, before Game 4. He was asked whether he, like Stephenson, had noticed any “weakness” in James’s game.

“Not in the last decade.”

netw3rk: This is Lance Stephenson, malingering around the perimeter in the fourth quarter of Game 4, head lolling from side to side, arms doing that little flap against the thighs that a person does when the DMV window they’ve been waiting in line two hours for closes right in front of them. There was, at that time, more than seven minutes left in the game, with the Heat up by 23. I would go so far as to call this a clear sign of wackness. Roughly two minutes later, Lance would score his first field goal.

Let’s start here: Trash talking is natural. It’s an activity as old as human competition. It is an intrinsic part of the culture of basketball, a culture where brash overconfidence bordering on irrational arrogance can sometimes be the only thing separating certain players from reaching the per-diem NBA promised land or living out their days as woulda-coulda weekend warriors, the best player in your apartment building. The road to the Association is lined with the skeletal remains of stillborn cautionary-tale careers. Fear being a prime motivator of the human mind, trash talking is, in effect, is like whistling past the graveyard. The Margins between making it and not are so small, the stakes so very very high, that only the most preternaturally talented of players can afford the luxury of humility.

So, if Lance Stephenson wants to trash talk LeBron James, I am all in on Lance trash talking LeBron James. I consider it profoundly unwise, but so is pursuing a career in a workplace where there are 400-odd jobs for a world population of 7 billion. Let’s hear them dogs bark.

What looks bad, though, after giving the world an extemporaneous Rorschach-analysis of the ways LeBron was betraying some vague inner weakness simply by speaking when spoken to, is the above video of Lance harumphing around the court in the smoldering late-game wreckage of Game 4.

Quoth Born Ready after the game: “I have no regrets.”

I mean, why start now?

Danny Chau: Paul George had two goals set in place before Game 4. He was going to be more aggressive, and he was going to be a leader for his team going forward. Statistically speaking, George had his best outing since Game 1, scoring efficiently, and even teasing some Kobe-esque maneuvers on his midrange jump shots. There’s something to be said about looking the part. He’s the closest thing there is in the league to the superstar swingman archetype. Being a part of that lineage means having a certain coded language ascribed to your being. It’s why so many have come to expect the world of him in such a short time.

Remember this? It’s been a year. It’s only been a year since George danced toe-to-toe with LeBron for several games during last year’s eastern conference finals. That was when the New Hope mythologizing first turned legitimate, when the clock on his superstardom started to tick. It was really only a matter of time before the masses grew impatient.

During the postgame presser, George concluded that the Pacers had outplayed the Heat, citing the disparity in free throws as the main culprit. He didn’t mention that he was responsible for five Pacer turnovers, as many as the Heat had the entire game. He was responsible for over a third of the Pacers’ total turnover count, and all five of his turnovers came on errant passes. The body language, the soft admonishment of Lance Stephenson, and the diversion he created by chalking the loss up to “home cooking” — none of it was all that becoming for a leader.

But that’s the thing about leadership. It can be learned. That’s the thing about Paul George, too. He more or less embodies that idea. It just takes a little more time, a little more experience, and a little more suffering. He came in as a completely raw, moldable talent without any defining characteristic beyond his athleticism. Now he’s the subject of Twitter debates on whether or not his status as a star is a media fabrication. That’s an extraordinary leap. He could have another one in him, but let’s give it a few.