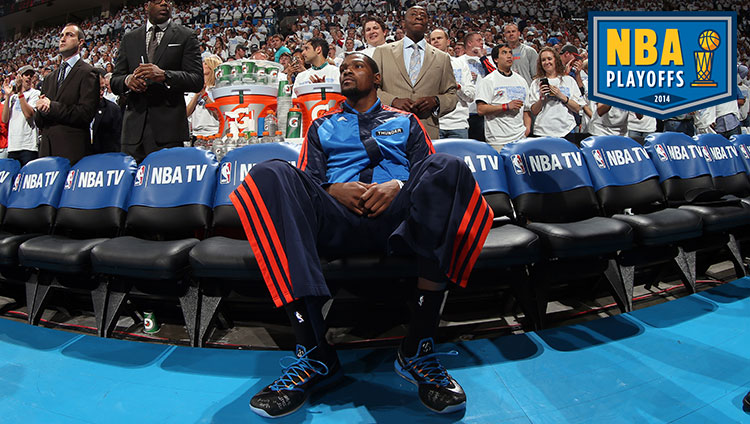 netw3rk: Kevin Durant stood at the foul line preparing to take his second free throw. His first shot had already splashed true, pulling the Thunder to within one point of the Grizzlies, 100-99, with 27.5 seconds left in overtime. Game 5 was the fourth consecutive overtime game of the series. Durant shook his shoulders loose and took a dribble to set his rhythm, when, like a Lil B video somehow made flesh, Joey Crawford came flying in from the baseline to snatch the rock out of Durant’s hands.

Crawford then stomped over to the scorer’s table, jabbed his finger angrily up in the air, and proceeded to rake a timekeeper over the blazing coals of his ego because of, I think, an issue with one of the scoreboard displays and its representation of the current foul situation. That was, apparently, super-important right then. Durant then missed his second free throw; you could almost hear DJ Khaled’s “Brown Paper Bag” beat ringing out as the ball dribbled off the rim into the waiting arms of Tony Allen. The Thunder would end up losing by one after an Serge Ibaka putback attempt failed to beat the buzzer.

Now, of course, it would be ridiculous to believe in a causality linkage between Crawford wresting the ball from an 87 percent free throw shooter who was settling into a shooting motion and that shooter subsequently missing a game-tying free throw. That is insane. The Thunder offense is rudimentary. The Grizzlies have the defensive presence of two hands gripping you roughly by the lapels. Russell Westbrook shot 10-of-31. 10 OF 31. Mike Miller hit five 3-pointers, including two in overtime. The Thunder lost because of those things, not because of Crawford.

I just believe that Crawford is an insufferable human whoopee cushion with a pathological need to constantly remind us that he exists.

Danny Chau: Here, I’ve run a Twitter search on “joey crawford lil b” for you. As you can see, Crawford has chosen to side with the Based God. Why? Because Lil B is the only one who understands.

The following is an excerpt from Lil B’s 2009 book Takin’ Over by Imposing the Positive!

Elderly people are amazing, they are the real millionaires, and we need to listen and learn from them.
—Chapter 13: The Elderly Are Gifts, Page 155

Chau: How else could this Bulls season have ended? Down three with less than a minute left, the Bulls missed two layups in the span of exactly 24 seconds. Over the course of five games, the Bulls and Wizards combined to shoot 40-for-125 (32 percent) on standard layup attempts (this doesn’t factor in driving layups, of which they shot a combined 33-for-35). To put these numbers in perspective: The Bulls and Wizards made 47 percent of their layups in the regular season; both teams in the Grizzlies-Thunder playoff series are converting more than 50 percent of theirs.

I Wanna Dip That Pass in Gold

Ain’t Nothing But a Wizard Party

Robert Mays: We should really just throw last night out. It was inevitable that the Bulls would muck up a game in this series; that’s what they do. Washington won its first playoff series in nearly a decade last night in the most unwatchable way possible, but that doesn’t take anything away from how this team played for most of these five games. As someone who (always) wants the Bulls to win, I couldn’t think of a more enjoyable team to whom they’d have to lose.

The Wizards won in the way good teams tend to. Just about every member of the roster had his moment at some point in the past week and a half. Nene lit the DPOY on fire in Game 1. Bradley Beal arrived in Game 2. In Game 4, Trevor Ariza tapped into whatever he has in contract years that would make us all immortal, and last night, John Wall had the first massive playoff game of his impossibly promising career.

Tom Thibodeau had his team’s RPMs in the red all season, and it showed down the stretch. Jimmy Butler’s legs are made of whatever Gumby is, and Joakim Noah spent the entire fourth quarter dragging around a lower limb. The Bulls had no final gear, no last step to take come playoff time. The Wizards, they had a terrifying one. It was something to see it all coalesce: Nene hitting every midrange jumper he took, Beal taking his game to the rim, Wall whipping those passes to the corner better than anyone not named LeBron. I’m glad this team will probably get Atlanta in the next round, because I’m far from done watching them this spring. And I can’t imagine who would be.