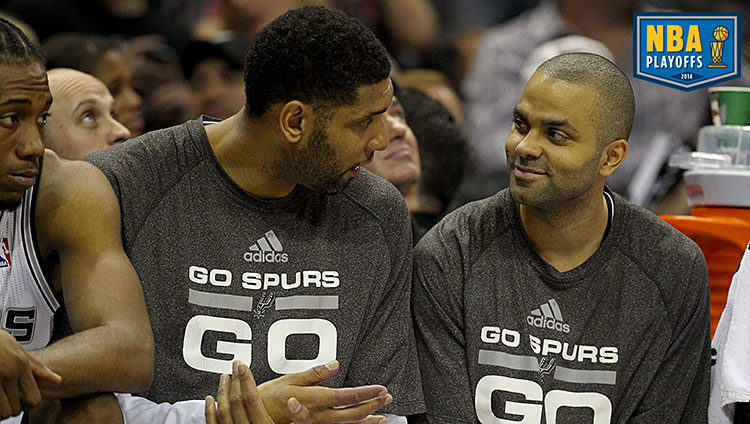 Louisa Thomas: If Serge Ibaka were not out with a calf injury, the Spurs would not have scored 120 points in the paint in the first two games of the Western Conference finals. They would not have defeated the Thunder by 17 in Game 1 and 35 in Game 2. They would not have had such an easy time on cuts to the basket. Tony Parker would not have glided down paths of little resistance on the way to scoring on nine of 10 shots from the restricted area this series. Without so many Thunder players desperately collapsing inside, Danny Green would not have been able to stand wide open beyond the 3-point line. The reverberations would not have echoed down the floor. Russell Westbrook might not have shot 29.2 percent on Wednesday. Kevin Durant might not have disappeared in the second half.

But here’s the thing: Serge Ibaka is out with a calf injury. Counterfactuals are only good for Internet laments.

The Machine, It Hums “Tiki-Taka, Tiki-Taka”

netw3rk: All I could think while watching Game 2 was that the Spurs were tiki-taka-ing OKC to death. These are the kind of cross-species meta-philosophy formulations the Spurs drive you to consider when they are at their best. No, this is not the first blowout in playoffs history. But there is a certain quality to a Spurs blowout, something about the manner in which they manage to reduce the other team to almost nothing. And so, all I could think of was tiki-taka.

Tiki-taka is the name for a style of soccer popularized by FC Barcelona and the Spanish men’s national team that uses short, incisive passes and constant player movement as way to dominate possession of the ball. If an opposing team never has the ball, it can’t hurt you. If it can’t hurt you, it does not exist.

It’s not a perfect metaphor. The shot clock means a basketball team can only rent the ball, not own it outright. But this is how far afield the Spurs’ casually surgical 35-point ass-scourging of the Oklahoma City Thunder drives my mind in search of an explanation for what it is seeing. The ball and the players just went wherever they wanted. Five Spurs scored in double figures. Of the 11 Spurs players who put up points, only two shot less than 50 percent. The Spurs had 41 made baskets on 27 assists. Danny Green was 7-of-10 from 3, pretty much all of them derived by jogging to a spot on the arc somewhere between the wing and the corner and waiting for the ball to fall softly into his hands before dropping it through the hoop. As if there were no one else there to stop him.

I guess its time to watch me some Martin. @NBAonTNT

Danny Green Did It Again 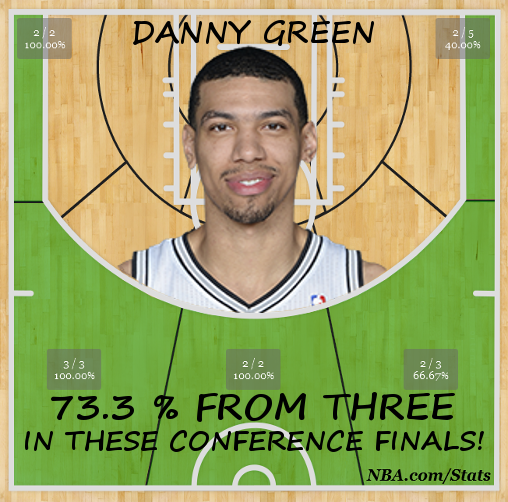 Andrew Sharp: Danny Green went off again last night, reminding everyone one more time how crazy it is that Danny Green is (1) in the NBA, and (2) starting in the playoffs for the NBA’s best team. In Game 2 he became the 10th player since 1985 to take at least 10 3s and shoot 70 percent in a postseason game.

The Spurs are full of Danny Greens. Patty Mills, Boris Diaw, Tiago Splitter. Guys who were supposed to wash out of the NBA. The Spurs take guys we’ve always loved, exploit very specific skills from them, and suddenly those players look dominant. We know this, of course. San Antonio has been doing it for years now — Green did this last year, too — but it’s the one piece of the Spurs story that never gets old. They take guys who probably shouldn’t be in the NBA and turn them into legitimate weapons. And it never stops being incredible. Are you sick of the Spurs right now? That’s totally fine. Just focus on that shot chart, because it’s impossible to hate guys like Danny Green.

This Is a Joke About French Surrender

Tough quote to take from Boris Diaw if you are a Thunder fan: "They gave up on the game pretty early." #Spurs

Danny Chau: Boris Diaw, as always, with the perfect assist. Thanks!

A Face in the Crowd

Chau: Spurs training camps are probably closer to unglorified Vulcan mind melds. New players come in, Tim Duncan grabs their faces, and then he shares his wealth of knowledge. This is how we like to set down screens for our shooters; this is how you deal with Manu’s freestyling; this is Pop’s favorite wine under $30; sorry if you were expecting a Taco Bueno, it closed down.

Newbies get the broad strokes and learn how to fit in, but veteran mind melds work toward embedding players within the mainframe. Kawhi Leonard internalizes the Tony Parker spin. Patty Mills upgrades from greatest benchwarmer to legitimate scoring threat off the bench. Danny Green absorbs nearly two decades’ worth of knowledge from every marksman who has come before him.

But the most intriguing development in these playoffs is how Tiago Splitter has essentially become Boris Diaw, seemingly overnight. His postseason assist rate is the highest it’s ever been. In 59 regular-season games this season, he had four games in which he dished out more than three assists. He’s already done that three times in 14 playoff games.

The point guard position will always have a special place in our collective hearts. The ability to control a possession, and bend it to your will, is endlessly fascinating. Steve Nash, my favorite player of all time, made a living out of probing the lanes and mapping out the entire court in real time to establish the pass of best fit. But over the years, I’ve grown to love the passes that don’t require as much maintenance, passes that are compelled by instinct. Splitter had four assists last night. The ball never stayed in his hands longer than a second in any of them. A shovel pass from deep in the paint, a bounce pass from the free throw line right between the defense, a dart to the trailer from the right block, a seeker missile from the top of the key. It all happens in an instant. No surveying required when the Spurs all occupy one mind.