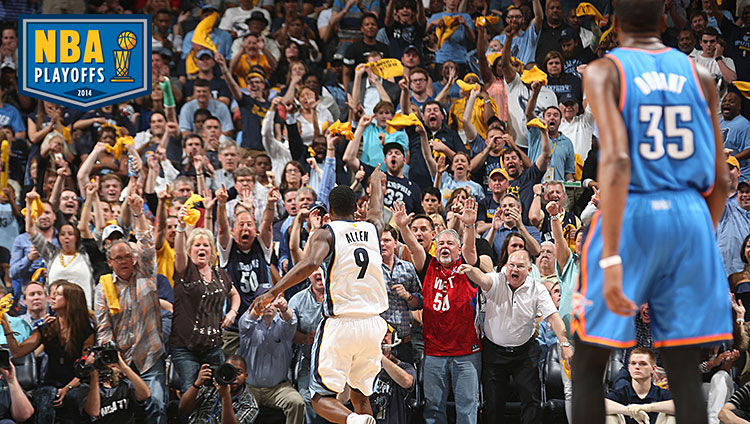 I Can’t Feel My Face

(All GIFs by Jason Gallagher)

Chris Ryan: I cannot remember seeing a basketball game where the outcome was decided by the two most athletically irresponsible people on the court the way last night’s Thunder-Grizzlies game was. Don’t get me wrong, it was glorious. But I’m sure Scott Brooks and Dave Joerger and anyone cheering for either team, and Kevin Durant, and Mike Conley Jr., and really anyone watching on television all felt like they were being taken on a car tour of Mulholland Drive and Toonces was behind the wheel.

And you know what? I would do it all again. I like seeing well-coached, unselfish teams elevate the sport, but sometimes I just want to grab my squirrel suit and BASE jump. And that’s what watching Tony Allen and Russell Westbrook decide a game is like.

Westbrook? He put all his chips in the middle, man. You were either on this journey with him or you were selling banana bread on the side of the road. What kind of person are you? Do you think the GIF above is what sports are all about? Or would you rather he marshal his offense more efficiently? I don’t know about you, but I’m choosing life.

The Based God Curse Is Real 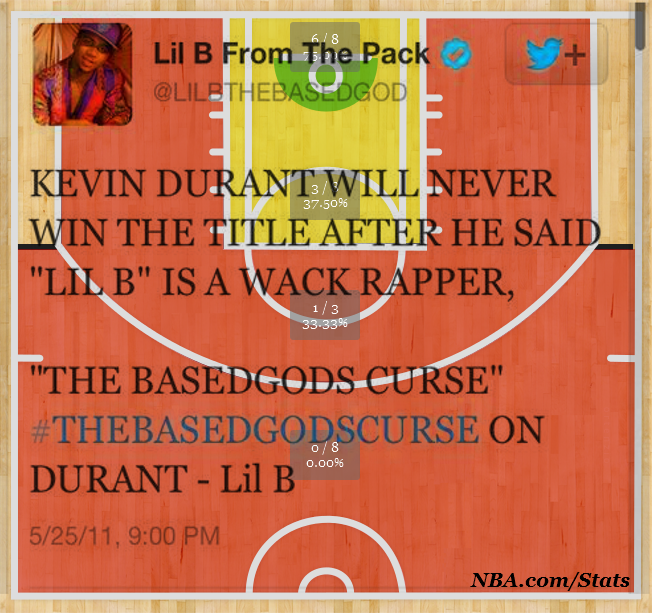 What’s Wrong With the Indiana Pacers, Part XXXIV: “I Give Up, I Mean It, I Can’t Watch Anymore” Edition

netw3rk: That right there is Pacers president Larry “Legend of the Corn” Bird. A man whose self-assured Midwestern face never once registered the enormousness of any of the countless enormous moments he experienced during his storied playing career, reduced to burying said face in his hands as he, I assume, contemplated the only question anyone is asking regarding his Pacers. Namely: What in the fuck is happening to them? The difference between Bird and everyone else pondering that question is Bird actually has to figure out what the answer is.

Hibbert, once the anchor of a nigh-impenetrable defensive scheme, has become a 7-foot-2 apparition whose positive impact is best analyzed with a Ouija board. He finished with four points, two rebounds, three fouls, and two turnovers last night. He has zero blocks and 14 rebounds over three games. He is shooting 29.4 percent in the playoffs at the fucking rim, and the ability of Atlanta bigs to stretch the floor has turned him from a rim protector into a piece of leaden furniture.

Meanwhile, Jeff Teague spun his series-long low-rent Tony Parker impression into a boxcar hobo’s Michael Jeffrey Jordan impression, drilling a 3 of such GTFO proportions that even he felt the need to shrug and call bullshit on it. Oh, and the refs missed him stepping out of bounds before the shot. As if Bird doesn’t have enough things on his mind.

Andrew Sharp: It hasn’t even been a week, and there are already too many ridiculous playoff games to keep track of. Thursday had the Grizzlies and Thunder shattering everyone’s brain, and honestly, once that game was over I didn’t even have the energy for a sequel. It was the end of the week, half the Grantland staff was out at a birthday party, and the thought of more chaos was just too stressful to handle.

So when Blake Griffin went full LaMarcus on the Warriors in the second and third quarters, that was OK. We didn’t need another heart-attack game. Watching Griffin carve up Golden State was the perfect way to unwind.

But then the Splash Brothers went to work. Steph Curry cut the lead from nine to six midway through the fourth quarter. Klay Thompson cut the lead from six to three on the next possession, and then scored six consecutive points to keep it close. With the Clips up six again at the end, it was back to Steph. First he drained a contested pull-up 3 that got everyone in the bar paying attention to the game.

Then he drained this:

Just like that, the playoffs were breaking everyone’s brain again, and then we were down to one final possession.

The Greatest Trick He Ever Pulled …

Sharp: When you consider how benevolent he seems to most of America and how devious and ruthless he is when you watch him up close, Chris Paul could actually be Satan. That’s not an insult, just an observation that comes to you if you watch that replay enough times.

Steph could’ve driven to the rim … the refs would’ve gotten killed blowing the whistle on a play like that …  but of course it was a foul. And of course Paul got away with it. He gets away with everything.

Earlier in the week I wrote that CP3 needs to let Griffin take over if the Clippers are ever going to win anything, and that’s still true, but I forgot to add the biggest benefit there: If Griffin takes over for the entire game, there’s still Playoff Paul looming to wreak havoc at the end of close games. And that’s what should make the Clippers terrifying to the West.

Lest you let that last foul distract you, CP3 also scored eight points in the final three minutes before he smothered Steph on the final possession. Was there was too much contact on that 3? Sure. And the NBA already admitted the refs blew a call against CP3 that cost the Clippers Game 1, so maybe it all evens out. Forget the foul, actually.

What’s important is that the playoffs are here, and there are no breaks. Just great players one-upping each other over and over again on national television, every single night. KD with the four-point shot on Monday, Bradley Beal on Tuesday, Tony Allen the last eight quarters, Russ in the fourth quarter last night, Steph at the end, LaMarcus, Dame, Blake, Jeff Teague … so many people are channeling the Holy Spirit right now.

Everyone except Paul, who ended that Warriors game tearing down the court with the ball, slamming it down as the buzzer sounded, and cursing out every Warriors player within a 25-foot radius, probably right before another State Farm commercial with him and his son in that tree house, smiling their way into America’s hearts.

God mode, Devil mode, whatever. Let’s keep doing this for the next six weeks.

NHL Grab Bag: Everything Is Terrible and Everyone Is the Worst