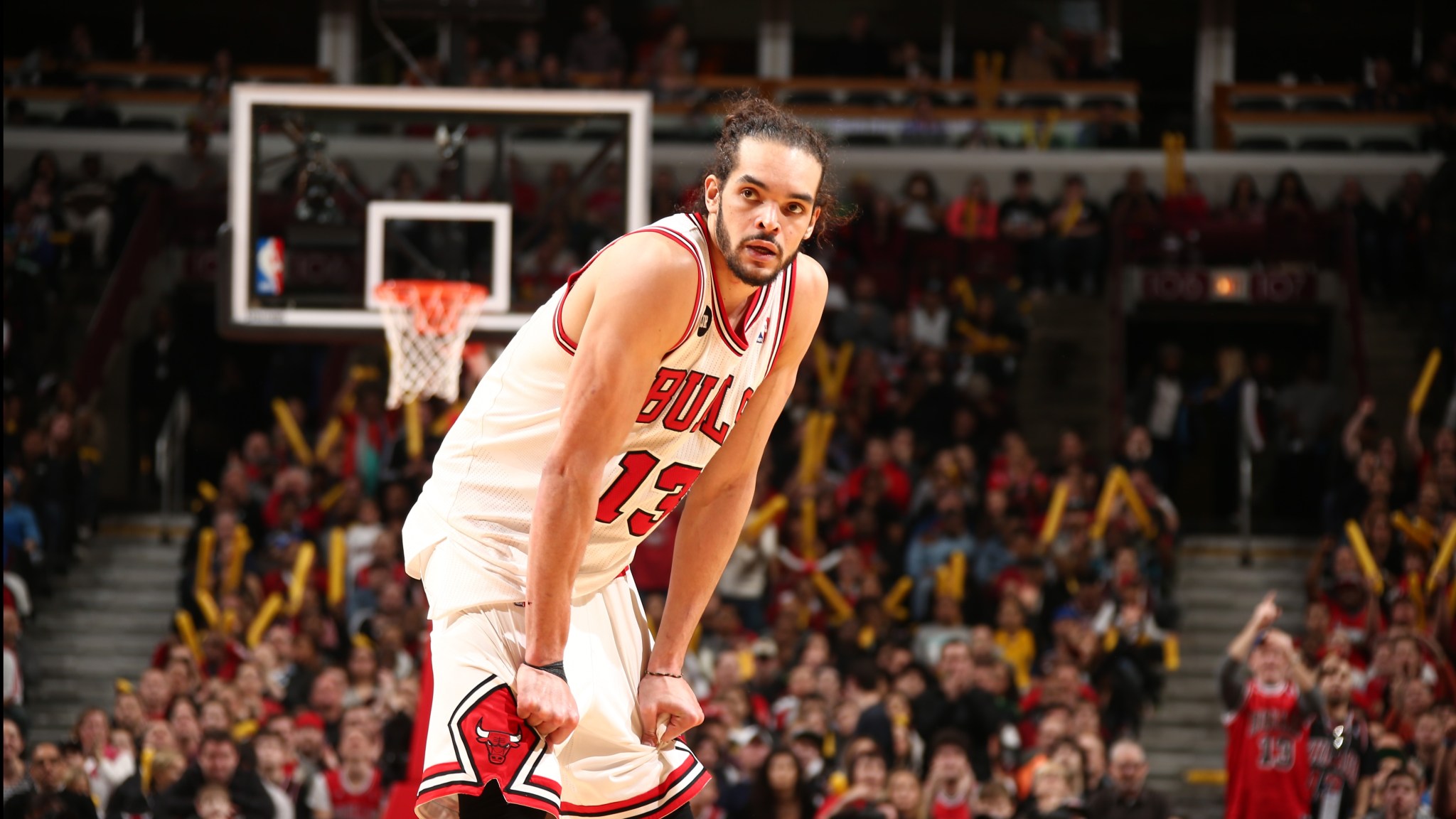 A quick look back at the NBA action from this weekend.

The Rockets Had a Pretty Good Weekend 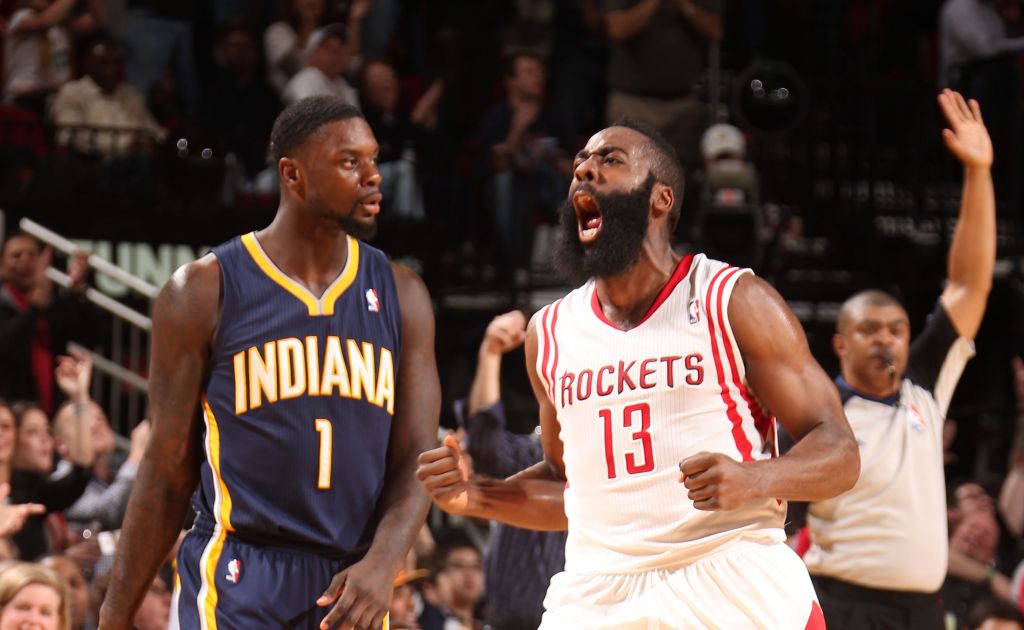 Andrew Sharp: On Friday, the Rockets went out and destroyed the Pacers on national TV. It was close for most of the first half, but then the third quarter happened, and the combination of James Harden and Chandler Parsons blew Indiana off the court. This is the sort of thing you could call a statement game. On Sunday, Houston got the Blazers, and for three quarters it looked like the sort of thing you’d call a letdown game.

Then James Harden went off again. Houston started the fourth down 12, but Harden helped make it close almost by himself. Jeremy Lin helped, too, but Harden put in 17 points in the fourth quarter alone, nailed a 3 from the corner to tie it with eight seconds left, and then Houston stole the win in overtime. It was evil. Watching all this was maybe more impressive than the Pacers win, since we got to see these guys work in a close game and come up huge over and over again down the stretch. This includes Dwight Howard, who was huge on the defensive glass (leading to transition), and the offensive boards, extending possessions.

If you look at the teams they’re beating and the numbers on the season — third in scoring, fifth in offensive efficiency, ninth in defensive efficiency, sixth in point differential, second in Hollinger’s power rankings — it’s getting harder and harder to not take this team seriously as a title contender in the West.

Having said that, Dwight, Harden, Chandler Parsons, Jeremy Lin, coach Kevin McHale … I don’t know, I still refuse to take these guys that seriously. Peaking in mid-March feels just about perfect for this team.

THE MEEKS SHALL INHERIT THE EARTH! #Lakers

AND MEEKS WILL INHERIT THE EARTH! @Jmeeks20 letting it rain down upon the Thunder!!! #LakerNation @Lakers keep this guy around!

The meek shall inherit the Earth. The Meeks shall conquer the universe.

The Meeks shall inherit the Earth

The Meeks shall inherit the earth – What is going on in LA?!?!?

There have been plenty of horrible nights with the Lakers this year, but the handful of times it’s worked for them, the Lakers are as much fun as any team in the league. Baze & KButter & Swaggy & Xavier & MEEKS. Put it on a T-shirt so we can never forget this Lakers season and stupid days like Sunday. 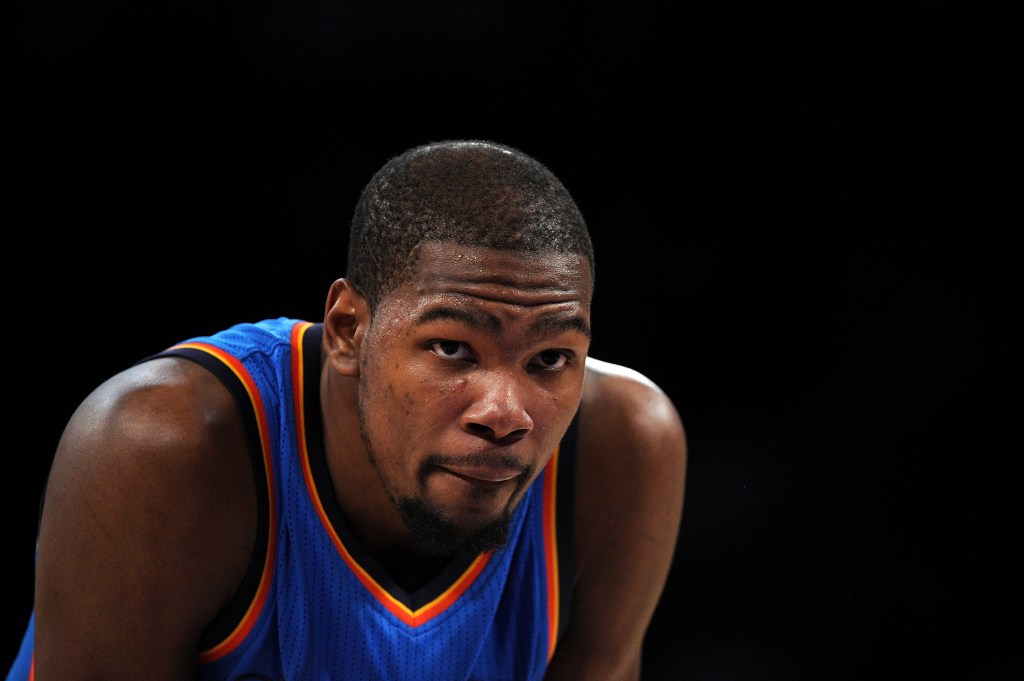 Remember the game before the All-Star break when OKC came out flat against the Lakers and started the fourth quarter down double digits? Then Kevin Durant came out and laid waste to everyone in the final 12 minutes to turn it into a win?

It’s hard not to think back to that when you see Russ dribble his way into an airball 3 with 30 seconds left, down three, on a possession in which Durant never touches the ball. OKC has now lost five of eight since Russ’s return after the All-Star break, the defense has turned Gerald Green and Jodie Meeks into superstars in the past five days, and … yeah. Here we are.

Chris Ryan: Here’s O.J. Mayo taking issue with a particularly hard Greg Steimsma pick in what would turn out to be a 12-point Bucks (12-point buck!) loss to the Pelicans. Mayo was one of the disappeared ones; left behind in Milwaukee. When the season started, Mayo was part of a veteran core that was going to help bring along younger Bucks players like Larry Sanders, John Henson, Giannis, and Brandon Knight, leading Milwaukee to that highly lucrative 7- or 8-seed in the Eastern Conference. When it became apparent that the Bucks were playing like they just were introduced to the game of basketball, very late in life, after years spent doing something completely different, that veteran core was detonated, with Gary Neal and Luke Ridnour going to Charlotte and Caron Butler going to Oklahoma City.

O.J. hasn’t exactly stepped up to be the hero Gotham needs, missing action for “illness” and “conditioning” at various points in the season. If you were wondering what it was like for a fairly decent if occasionally difficult NBA player to be stuck on one of these tank division squads, look no further than the GIF above.

Sharp: The Bulls have not been much fun the past few years. Without any stars on offense, they’re like an NBA version of Bo Ryan’s Wisconsin teams, bringing everyone down to their miserable level, with the added bonus that playing 82 games this way wears down superstars in the thick of their prime. When you remember that Chicago’s almost definitely going down in the second round, it all gets pretty depressing.

But there’s one exception here.

When Chicago plays Miami, it’s fun. All of the insane intensity that’s depressing during, say, a blowout over the Bobcats … All that makes it impossible not to root for Chicago against the Heat. Everybody knows they’re going down in the end — the playoffs — but the Bulls refuse to concede any of this.

“We want what they’ve got. That’s the truth,” Noah said of the Heat on Sunday. “We have to go through those guys to get to where we want to go.”

The Bulls-Heat back-and-forth has had all kinds of highlights over the years. My personal favorite will always be Derrick Rose looking homicidal as he watched LeBron dance during All-Star intros a few years ago, but there’s been plenty to love since then. Chicago snapping Miami’s streak last year, Nazr Mohammed going nuts in last year’s playoffs, Joakim Noah and the black widow, Noah applauding Bosh and Chalmers, everything Noah’s ever said about Miami, or, you know: Jimmy Butler kicking LeBron in the face Sunday.

Butler seems to be fitting in pretty nicely with all this.

Jimmy Butler is not a LeBron James fan. "If you don't play on my team, I don't like you. I let it be known."

You don’t have to hate the Heat’s “Hollywood as hell” worldview or love the Bulls’ old-school, every-game-matters approach to everything. But there’s nothing better than watching them collide. It’s the best rivalry in the NBA. Where Miami feels like Ali and Chicago feels like Frazier, and we all get to watch two teams that genuinely hate each other.

Maybe we already know how it ends for both of them — Miami’s the Ali destined to become the iconic team over time, while Joe Frazier and Tom Thibodeau end up broke in Philly somewhere — but that only makes it sweeter when the Bulls show up to whup ass anyway. They will not let this rivalry die.

“He was talking trash to them the whole [game],” Taj Gibson said of Noah. “He was letting them know he was going after every rebound and score every time he gets it. I could see it on their faces. He was frustrating them.”

Even when the Heat were up 10 late in the third quarter Sunday, I had no doubt Chicago was coming back to make it close at the end. That’s how these teams work, especially at the United Center. Joakim Noah will never stop haunting Bron & Co., and the Bulls will be killing themselves against Miami forever, driving the best team in the league insane. It’s a beautiful thing.

What I’m saying is … I may hate watching the Bulls sometimes, but god it’s fun to watch them play the Heat.