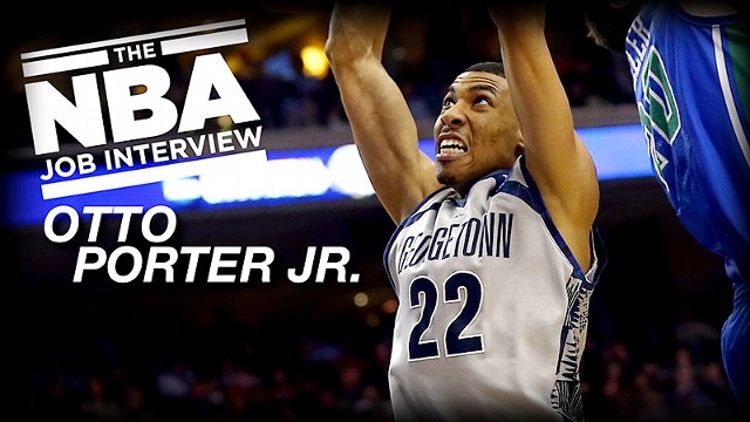 Jalen Rose and Bill Simmons talk to NBA draft prospect Otto Porter Jr. about how he plans to guard LeBron James, the parts of his game he needs to improve, and the odds he ends up on the Detroit Pistons. Check out the full-length video below, followed by Brett Koremenos’s scouting report. Watch all the NBA Job Interviews here. And watch this space for more NBA Job Interview videos, featuring Bill Simmons, Jalen Rose, and some of the best young talents from the 2013 NBA draft class.

After a nondescript freshman campaign, 6-foot-9 Georgetown forward Otto Porter Jr. became a versatile weapon in his second collegiate season. Although he doesn’t excel in any one area, Porter does nearly everything at an above-average clip and possesses a massive 7-foot-1 wingspan for a player projected to be a small forward at the NBA level. It’s his impressive length, along with an improved 3-point shot, that has him climbing draft boards as a potential “3 & D” guy at the next level.

But though Porter shot 42 percent from behind the arc in his sophomore season, it was on a very low number of attempts. With a slow release and lots of moving parts in his stroke, Porter isn’t going to be able to step right onto an NBA floor and mimic some of the elite catch-and-shoot wings — think Danny Green — without a significant amount of work and some refinement of his mechanics. That disjointed stroke (one that’s often saved by a great follow-through) is part of the reason why his accuracy drops to just 25.6 percent when he shoots off the bounce, according to Synergy Sports. Porter is just 20 years old, so there is plenty of time for him to improve in this area, but the percentages shouldn’t fool anyone into thinking the young forward is a finished product as a shooter.

Outside of his shooting, Porter doesn’t flash much offensive ability. He’s a fine ball mover but lacks the burst or explosiveness to beat people off the bounce, and Georgetown’s hybrid Princeton offense is devoid of the quick hitters and pick-and-roll reads that dominate the NBA level. That doesn’t mean Porter can’t ever be a competent offensive player; it just means he’ll have to put in quite a bit of work to do so.

Overall, Porter has quite a bit in common with the Grizzlies’ Tayshaun Prince, another long, lanky wing with a solid all-around game, slow-developing jumper, and a solid defensive presence. Porter is a good defensive rebounder, and he has potential as a passer out of pick-and-rolls. Though today’s style of play isn’t the same as when Prince was making a name for himself in the mid-2000s, there’s no reason to think that Porter can’t be a similar player for a long time in the NBA.