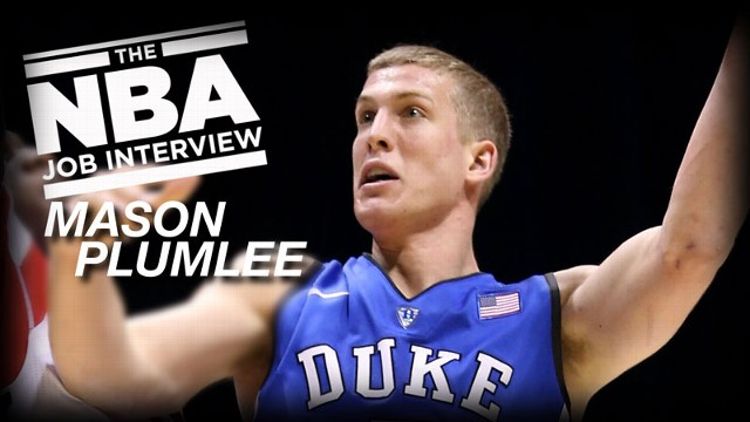 Jalen Rose and Bill Simmons ask Mason Plumlee about what his brother has told him about playing in the league, his fear of playing against Carmelo, and getting a suit that fits when you are 6-foot-11. Check out the full interview below, followed by Brett Koremenos’s scouting report. Watch all the NBA Job Interviews here. And watch this space for more NBA Job Interview videos, featuring Bill Simmons, Jalen Rose, and some of the best young talents from the 2013 NBA draft class.

As a four-year player from one of the top college basketball schools in the country, Mason Plumlee is something of a known commodity. That doesn’t mean, however, that the Duke big man is a finished product. A mobile and athletic 7-footer, Plumlee should be able to spend time at both front-court positions at the next level, though his time at center may be hindered slightly by his average wingspan, which is only 6-foot-11. Even still, Plumlee brings good energy, plays with discipline, and is well prepared for contributing right away in the NBA.

Most Duke bigs in recent years are asked to be blue-collar role players, but for the past two seasons, particularly this past year, Plumlee was given far more freedom to operate out of the post. His face-up game shows potential, he attacks with pace, and he can get to jump hooks with both hands. Developing a reliable jumper while facing up will be key to whether he can become a primary offensive weapon for his team, but in limited opportunities, Plumlee is a viable threat. Most likely, Plumlee will make his mark finishing drop-off passes and putbacks on the offensive glass — an underrated skill. He has good hands but will likely need to add some finesse finishes at the hoop now that he won’t be able to power up and dunk everything at the rim like he could against the younger, less physical competition he faced in college.

Another plus Plumlee can bring to an NBA offense is his willingness to dive hard to the rim off pick-and-rolls. This type of movement often goes unnoticed by the casual fan unless the roll man gets the ball, but the players who always dive hard after screening, regardless of how often they receive the pass, can be invaluable. Plumlee was targeted quite a bit off pick-and-rolls while at Duke, so it remains to be seen if he displays the same effort without a high volume of touches, but the early signs are encouraging.

Defensively, Plumlee is a good, but not great, rebounder. He is more than capable of cleaning up on the boards but won’t exactly be confused with Kevin Love anytime soon. Overall as a defender, he puts forth solid effort but struggles at times in pick-and-roll defense, something Duke’s game against Louisville in the NCAA Tournament made quite clear. If Plumlee wants to see consistent minutes in a pick-and-roll-heavy league, he must improve this part of his game. And without great length or shot-blocking ability, Plumlee must work to be a great positional defender, one willing to absorb physical contact in order to take charges — similar to Nick Collison from Oklahoma City, a player whose career Plumlee could easily emulate with the right approach.

From Game 1 to the Groupie Apocalypse: Remembering the NBA Finals