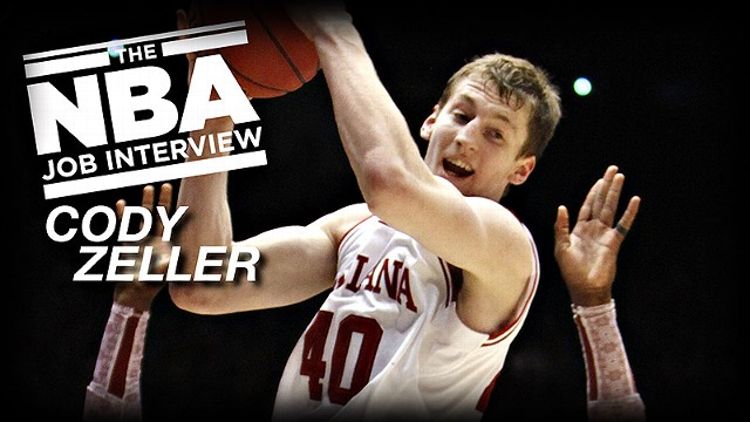 Jalen Rose and Bill Simmons talk to NBA draft prospect Cody Zeller about adjusting to NBA pick-and-rolls, fighting his older brothers on the court, and how it kind of looks like he is falling over when he makes a move to the basket. Check out the video below, followed by Brett Koremenos’s scouting report. Watch all the NBA Job Interviews here. And watch this space for more NBA Job Interview videos, featuring Bill Simmons, Jalen Rose, and some of the best young talents from the 2013 NBA draft class.

When Cody Zeller tested the draft waters after a brilliant freshman season at Indiana, there was talk that the young big man was in serious consideration for the no. 1 overall pick. Instead of coming out last year, Zeller opted to return to school, and by failing to make considerable, if any, progress, he’s now facing the possibility of not even going in the top 10. The Indiana big man won’t fall too far, however, as there are still plenty of teams interested in a 20-year-old 7-footer who runs the floor like a deer, put up great scoring numbers in a BCS conference, and blew away his fellow frontcourt draft mates during the athletic testing at the NBA combine.

Despite all that, there are still quite a few concerns with Zeller’s game and body. For starters, he is another one of the draft’s top big men with the curse of short arms, sporting a wingspan of just under 6-foot-11. And though he tested well athletically at the combine, Zeller plays far more like Tyler Hansbrough than like Chris Andersen during live game action.

Zeller still managed to score at a decent rate from the post in spite of those drawbacks, but he lacks a refined game plan on the block and struggles to finish through contact, which will present problems as he moves up a level. Tom Crean’s offense at Indiana certainly didn’t do him many favors in terms of disciplined spacing, but it’s hard to see Zeller making an impact as a scorer down low, even in the more refined setting NBA offenses provide. Granted, Zeller is still very early in his growth, so an NBA-level post game could emerge with time as his body develops more, but it hasn’t happened yet.

One place Zeller should continue to excel is scoring in transition. He combines great straight-line speed for a big man with good effort, and he showed the ability in college to consistently beat opponents down the floor for easy buckets. There has also been a lot of talk about Zeller’s outside shooting, so in theory, the young big man could transition his game to the perimeter. The problem for Zeller is that he missed out on valuable game repetitions in such a role while spending the majority of his time down low or near the elbow at Indiana. In fact, Zeller had just eight catch-and-shoot jumpers all last season, according to Synergy Sports data, and attempted just two 3-point shots his entire career. Zeller does have solid form and did shoot 75.6 percent from the free throw line, so there is enough evidence to suggest this could be a weapon for him one day, giving him a much brighter offensive future. He would need to learn how to play off his jumper better, using his shot credibility and fakes to drive to the rim — something he does fairly well — like Dirk Nowitzki or David Lee, but it may take Zeller a few stints in the D-League to figure that out.

Perhaps the biggest concern with Zeller’s game, though, is his poor defensive rebounding. Zeller finished his last collegiate season ranked 327th (and yes, that’s as bad as it sounds) in defensive rebounding percentage. Given that defensive rebounding is typically an immutable skill, it means Zeller will always have to be paired in the frontcourt with a strong rebounder. Just what position he will play there, however, is another concern. Zeller is alert and gives good effort, but he’s a positional tweener on defense. For at least the next few years, Zeller will struggle to guard more physical frontcourt players (typically centers) and may lack the footspeed to stay in front of most power forwards.

With such limitations in his defensive ability and rebounding, Zeller will need to be drafted to play alongside frontcourt players who make up for his weaknesses and allowed to slowly find a niche on offense. Should Zeller land in a less-than-ideal situation, it could spell trouble for his future in the NBA.