NBA Finals Shootaround: The Spurs of the Moment 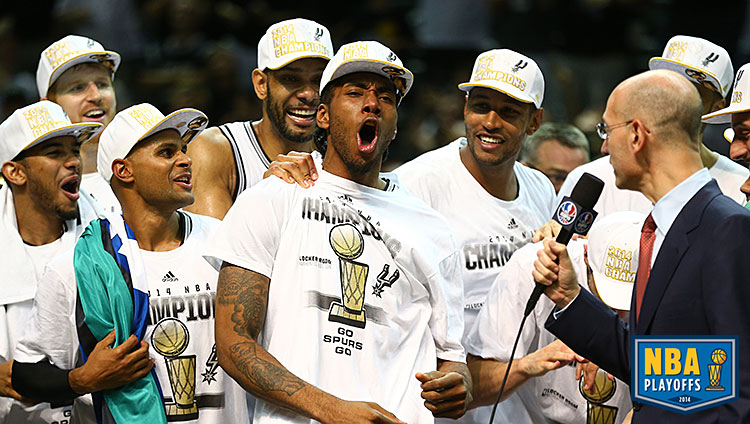 netw3rk: Game 5 felt like the culmination of something. It was more than just another June coronation after a long NBA campaign. Game 5 was like seeing the various strands of recent NBA evolution come together with the dusty tenets of play-the-right-way basketball. Simultaneously old school and cutting edge, the 2013-14 Spurs are the closest thing we’ve had to a postmodern NBA champion.

They are the culmination of the post—Barcelona Olympics/international player trend of the early 2000s: Boris Diaw and Tony Parker from France; Tiago Splitter from Brazil; Manu Ginobili from Argentina; Aron Baynes and Patty Mills from Australia; Marco Belinelli from Italy; Cory Joseph from Canada; and Tim Duncan from the U.S. Virgin Islands. To describe Diaw, in particular, is to create a Mad Lib of general athletic qualities from which the mass of American sports fans from 1945 to, say, 2001 would instinctively recoil: undersize, finesse player, named Boris, appears out of shape (to put it kindly), is French. Boris Diaw, in any other era, wouldn’t happen.

San Antonio’s offense represents the pinnacle of the ideas introduced by the D’Antoni/Nash Suns — the constant motion, the high pace, the sets that create space on the floor seemingly larger than the actual boundaries of a basketball court. The defense combined react-and-recover pick-and-roll coverage with rim protection, flooding the paint by helping off offensive nonentities, and goading the opponents into midrange shots.

The Spurs are the Platonic ideal of intelligent franchise management in the age of the punitive collective bargaining agreement. Kawhi Leonard was the 15th pick of the 2011 draft and he is the second-youngest Finals MVP, behind Magic Johnson. Ginobili is a Dennis Rodman away from being the greatest second-round pick ever.

And, finally, this particular team feels like the culmination of the Pop-Duncan era, 17 years in the making. They’ve seen Jordan retire twice, seen the 3-point line and hand-check rules changed, seen the Malice at the Palace, Iverson, and two lockouts, and bridged the gap from Kobe to LeBron. And now, implausibly, with their greatest team ever, they won their fifth NBA title. And I really think they could do it again next year. 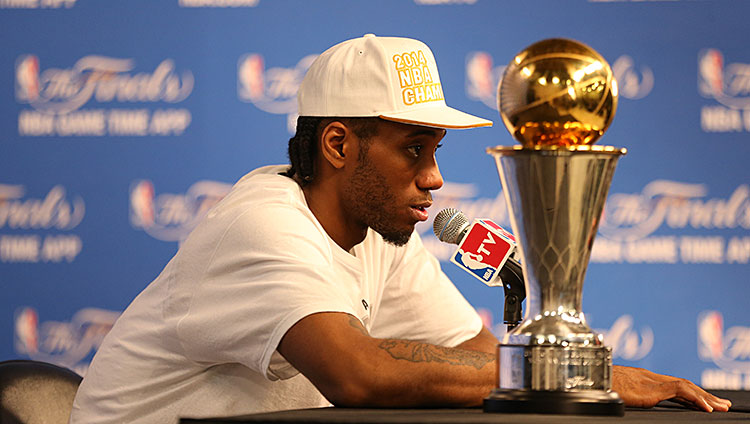 Kirk Goldsberry: A few seconds before Game 5’s final buzzer, a defeated LeBron James walked over to the Spurs’ bench to offer congratulatory handshakes and hugs. The first Spurs player he encountered was their 22-year-old phenom, Kawhi Leonard, who would be named Finals MVP just a few minutes later. The two exchanged hugs and went off to vastly different places.

On the long list of reasons this year’s Finals were so different from last year’s, Leonard is near the top. He was the obvious MVP of the series, making plays on both sides of the ball, guarding James on one end and leading his team in scoring on the other. Without him, the Spurs would not have won the title. It’s as simple as that. He guarded Kevin Durant and Russell Westbrook in the Western Conference finals before taking on James in this series. There are few, if any, players in the league who can handle those jobs as well as he did. However, as good as his defense was, it’s his sudden emergence as a scorer that helped put the team over the top.

His 3-pointer with 4:47 left in the second quarter provided the main inflection point of the night. After James and the Heat opened the game on a 22-6 run, Leonard’s 3 gave San Antonio its first lead of the game. It would never trail again.

Leonard plays with the quiet intensity of a man obsessed with his craft. His work ethic is legendary. He played the game of his life three times in a row to help put his team over the top.

After the game, Tim Duncan described how Leonard shrugged off two mediocre games and flipped the switch after the Spurs lost Game 2 last week:

“He showed up in the last three games and just played out of his mind. He’s not worried about just doing the little things, he wants to do it all, and he plays with a confidence that is just amazing. I’m honored to be on this team right now because he’s going to be great for years to come.”

“The last time I tried that I got blocked badly by Caron Butler of OKC … I got made fun of badly. My teammates made me promise I wouldn’t ever try that again.” —Manu Ginobili.

A Manu in Full

Andrew Sharp: That dunk. What? HOW?

After that happened, when I picked the pieces of my brain off the floor, the first thing I thought about was last year.

A year ago this week, we were watching Manu Ginobili self-destruct on national television. We were watching the end. While the whole world remembers LeBron losing the headband and turning into the Incredible Hulk in Game 6, and then Ray Allen’s 3, there was also Manu. He helped lose the game just as much as those guys won it. He finished with eight turnovers, including a bunch of crucial mistakes in the fourth quarter and overtime. His plus/minus was minus-21 by the end.

“I was very insecure,” he said that night. “I had a career high in turnovers in a really bad moment. It really helps to make me feel terrible … I have no clue how we’re going to be reenergized. I’m devastated.”

In Game 7, he had four turnovers in the fourth quarter, the last of which killed the Spurs’ comeback attempt for good. “I am trying to put things in perspective,” he said then. “But it’s very hard. And the next few days are going to be very hard.”

It looked like the worst possible end to a great career. Even if you were rooting for the Heat, you couldn’t help but feel bad. Ginobili’s always been one of the most entertaining players in the NBA. His résumé is full of clutch shots, impossible highlights, and plays that remind you how much fun basketball can be. But at the end, he was giving away the NBA Finals, while the rest of us quietly rooted for him to retire, because watching this was getting too painful.

Fast-forward a year, and everyone has to love the ending Ginobili actually got. He may not be done yet, but whatever happens from here is a bonus. He shot 50 percent from the field in these Finals, 42 percent from 3; he had the highest plus/minus of all Spurs; and he capped it off with 19 points in Game 5. And that dunk. Once that happened, everyone knew in their hearts that it was over. When Ginobili’s dunking on entire teams, the Spurs are not losing.

“Manu will be good,” we heard from Tim Duncan last year. “He’ll be just fine. He’ll blame himself and put it on himself. That just makes him more aggressive and more ready to play the next one.”

It took a year, but Duncan was right all along.

The Block Is Hot

Sharp: Look at the difference between the Manu dunk and what happened to Wade up there. That’s your 2014 Finals recap. The end.

Danny Chau: “I didn’t do enough,” LeBron James said, he who scored nearly a third of the Heat’s total points in the Finals, on percentages better than his regular-season averages. LeBron thinks this. And he’ll continue to think this through the summer and through next season. It will continue to run through his mind, like 2011 before this, and 2007 before that. He’s the best player on earth and a two-time champion. He’s a winner. But even winners dwell in the loser’s reality.

A championship celebration is an external affair. It’s a vindication of what was put into the process; it takes the pressure, the uncertainty, the struggle, and essentially puts all the hot air into a beach ball to be tossed into the masses. Burdens are shed, and for the first time in the season, the idea that a team “leaves it all out on the court” almost isn’t hackneyed hyperbole. There isn’t much to take home other than satisfaction (and a trophy).

The runners-up take failure with them, because there’s nowhere else to set it. They sit in silence and wonder how it could’ve been different. Memories of specific plays and specific moments crystallize and remain. It’s the knife kept buried in their flesh, because these are proud, private men in mourning, and somehow it makes more sense to keep the bleeding internal than to bleed out.

Yet I can’t help but imagine the Spurs and Heat looking back on this series and thinking the same thing: The Spurs played the most logically beautiful basketball in decades, and at their best, there wasn’t much any one force could do to stop it. Chris Bosh, in his postgame interview, said as much, and LeBron would later corroborate. This loss won’t hurt as much as 2011, a year when the Heat faced a chimera made up of the Mavericks, the media, and the demons born in the crucible of their own making. It’s not as complicated this time around. They were outclassed by a Spurs team in every single way on the basketball court. For how beautiful the Spurs played, the totality of their superiority almost made this Heat collapse boring. And that says more about the Spurs’ legacy than about LeBron’s.

San Antonio’s Revenge: Scenes From a Championship Run for the Ages