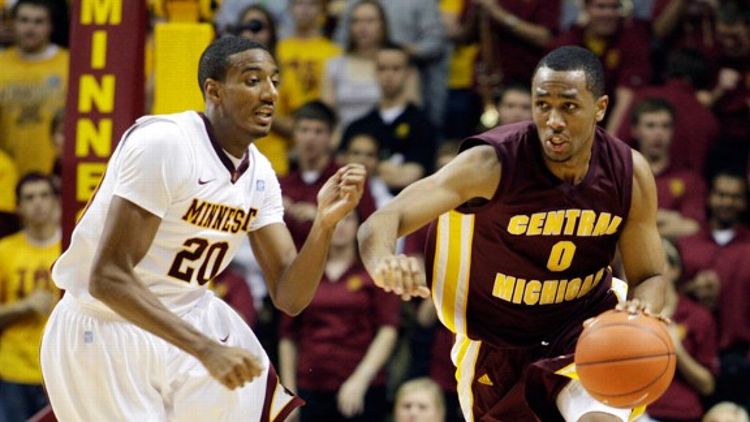 One of my top five opening lines in a novel belongs to Samuel Beckett’s darkly comic dagger-turn of a debut, Murphy: “The sun shone, having no alternative, on the nothing new.” Don’t that just sum about 78.4 percent of it up? It certainly does if the “it” in question was the game I watched Tuesday night. The fluorescent sun did indeed pour down on Williams Arena for Minnesota (10-1) and Central Michigan (4-4) — warm-up threads were donned, layup drills run, and 40 minutes of going up and down an oddly raised wood surface with some maroon-painted polyurethane lines around were enacted. Fouls were called, bottles of water consumed. Then an overbearingly loud horn sounded and a Big Ten team’s schedule was duly padded in an easy win against a middling mid-major. Padded for what purpose, you ask? Good question. None, really. Because the Minnesota Gophers season is over.

It ended the Sunday after Thanksgiving, when senior power forward Trevor Mbakwe went down with a torn ACL in a blowout loss to the Dayton Flyers in the Old Spice Classic. Most preseason polls had the Gophers finishing seventh at best in the Big Ten. As last night’s ESPN crew pointed out several thousand times (each time more assiduously than the last), he was their key to the bubble: a dominant inside presence who was last year’s conference rebounding leader and a possible first-round draft pick. His loss is just the latest blow in the Lars von Trier highlight reel that has been Tubby Smith’s four-seasons-and-counting tenure in Minneapolis: a funeral procession of injuries, transfers, suspensions, a five-star recruit who announced he was leaving the team on YouTube, a talented point guard whose mom e-mailed a local journalist at 3 a.m. to get the word out that her son needed to start seeing other people (like Oregon). Last year was especially torturous; after beating North Carolina and West Virginia in the same weekend at a salsa-fueled tournament in Puerto Rico, senior star Al Nolen went down for the year and they finished the season losing 10 of their last 11 games. This year, like all years, offered the promise of transition. Without Mbakwe, they’re a team in transition the way early ’90s Yugoslavia was a nation in transition.

The Gophers are still 10-1, a record they’ve amassed in the traditional fake way by playing a non-conference schedule larded with baker’s colleges and mime academies. I hadn’t had a chance to check them out since Thanksgiving, but what struck me about Tuesday night’s win wasn’t how terrible they seemed without Mbakwe but how inchoately engaging they might’ve grown to become with him. Who knows? A break here, an injured Purdue star there, they might’ve oozed their way up toward the top of the Big Ten’s squishy middle tier.

In the obtuse cosmology of preseason hoops, the game itself constituted something resembling a test. The best player on the floor was Central Michigan’s Trey Zeigler, a Big Ten-caliber guard who was recruited by several major programs (and some less-than-major ones, like the Gophers) but chose to play for his dad, Chippewas coach Ernie Zeigler. The Chippewas started out strong against the newly center-less Gophers (center-less in the existential sense; they have a center — Ralph Sampson III, a promisingly named but ultimately ill-defined youth with the soft, brooding eyes of a café poet and the impressionistic intensity of a jazz flutist). For a while, they looked liked the better shooting team and the most aggressive on defense (Mbakwe’s slack-picker-upper Rodney Williams is himself somewhat hobbled and never really showed up beyond one gob-stopping, if meaningless, dunk in the first half). But the Gophers picked up the tempo, got some turnovers, spread the Chippies’ zone further than its super-structure would countenance, and opened up with easy looks for a set of guards who would’ve been a nice complement to the good ol’ Big Ten kidney-punching inside team Tubby had to ready to roll around Mbakwe. By the time Zeigler got going in the second half, the coffin had already been shipped. Honestly, though, there were several points early on and near the end where telling the difference between the MAC team and the Big Ten team was like telling the difference between third and fourth act at New Band Night over at the 7th Street Entry (assuming that vaunted institution remains extant).

The Gophers will never make it as a shooting team in the Big Ten, and playing for the NIT is a hard thing when it’s only mid-December. But Samuel Beckett suffered from cataracts, emphysema, and the recurrent visitation of boils on his neck and asshole, plus the burden of being a genius. So, hey, Gopher Nation, keep that in mind while you’re out shoveling the driveway this winter. There is always the misery of our fellow man to console us as we slog toward the next smeared sunrise.

Previously by Jon Dolan:
Adventures in Revisionist History: Big Ten Edition
Beavis and Butt-Head Recap: Back on the Couch
Unkool Thing: Notes on the Split of Sonic Youth’s Kim Gordon and Thurston Moore