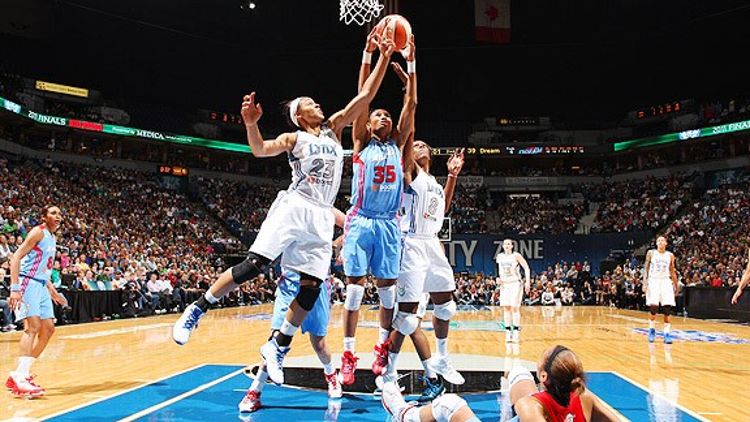 There is some great basketball being played by gifted athletes right now. I’m not talking about the games at Rucker Park or in the lockout-free gyms of L.A., Houston or Philadelphia, where the likes of Melo and La La are speed-dialing their press agents following every neo-conversation … No, these contests are on live on network TV from Minneapolis and Atlanta: the WNBA Finals. And it’s now way past the time that news media get hip and give these women their due. The league has teams in 12 cities, and most hometown dailies don’t assigns a beat writer to all of the teams’ games. Well, it’s time to wake up, dudes. (And don’t blame this on the fact that the sports world is run by men.)

But why change now? The WNBA (in my opinion, by far the most meaningful legacy of the ballsy and ingenious NBA commissioner David Stern) needs to survive and thrive. The fact is, thousands of women and families attend games in major cities every year, and that means there are consumer products to be hawked and revenue to be generated. But the “old way” of selling the league needs to die.

Since the league was created in 1996, the WNBA has been systematically maligned by basketball “experts” and satirized by the likes of Beavis, Butthead and The Family Guy for its cumbersome style of play and its audience demographics. The former, to anyone who really understands the game, not the knuckleheads who believe in Ron Artest aka Meta World Peace— isn’t true. And as for the fan base, who cares?

Women’s basketball has made giant strides since the late 1960s, when teams were still composed of six players, three of whom were prohibited from crossing half court. Since the passage of Title IX, thousands of gifted women — Nancy Lieberman, Cheryl Miller, Ann Meyers, Paula and Pam McGee, Anne Donovan among them — have been given opportunities to excel. Soon after, the business of women’s college basketball flourished. Stars and big-time coaches became pop culture heroes. Nevertheless, efforts to create a professional league floundered until Stern committed NBA resources to his plan. Don’t get me wrong — I’m not preaching that the league, now under its third leader in 15 years, Laurel Richie, can’t do a more creative job selling its “product” to the mainstream, but I am saying that the media, new and old, needs to make a commitment before the baby is killed. Anyone involved in the hoops world, on campuses, at AAU tournaments, or in the Olympic movement knows the women play it right. That might be one of the problems in a culture that celebrates the drone-head Kardashian sisters marrying Lamar Odom and Kris Humphries, or that tunes into furiously moronic TV shows such as Basketball Wives, or worse, purchases books by the spurned divorcees of one-time NBA players who never figured out the risk/reward ratio of taking the vow with a rock ‘n roller who can dunk.

The WNBA has many attributes: star players, some excellent coaches, 12 teams in major markets, low payrolls, and some TV exposure. This season’s finals between Atlanta and Minnesota showcase the All-Star Angel McCoughtry against the Rookie of the Year Maya Moore. These players have personalities and character, and in this diverse league, there are storylines galore. During the past 15 years, TV ratings and attendance have gone up and down.

Franchises have come and gone, but in part thanks to Stern, the owners and players won’t give in. So exactly what is the problem? Why doesn’t the media cover this league more? And what role does the league play in terms of making its product more or less attractive? Does it need to stop thinking and acting as if it is still a social movement, or does it need to push, push, push the envelope and take each and every chance? After all, the act of survival is 24/7.

In Defense of Wussing Out in the NFL