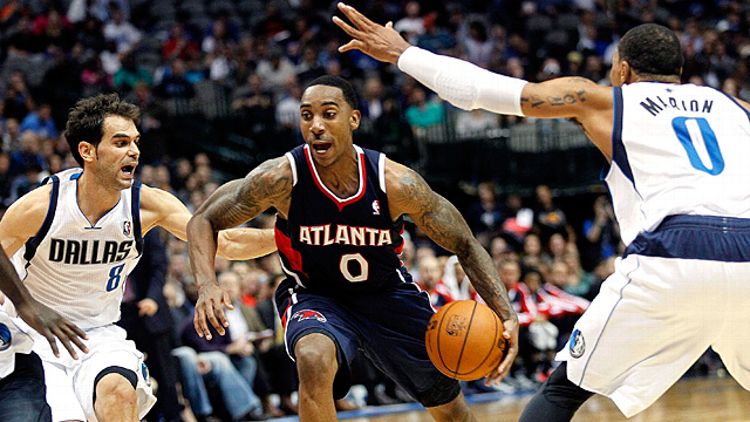 On Wednesday, for the first time in nearly a decade, Atlanta played a game without Josh Smith as a member of their team. Whatever you think of Smith as a player — and there are quite a wide range of opinions — he led the Hawks through one of their most successful stretches as a franchise. During a six-year run teamed with Al Horford and Joe Johnson, Atlanta made the playoffs every year, compiling a .557 winning percentage and making an appearance in three Eastern Conference semifinals. Smith’s teams were never serious contenders for a title, but they were dangerous enough to put a scare into a team that was.

With Smith now plying his trade in Detroit, the burden of keeping the Hawks as a playoff nuisance now falls to point guard Jeff Teague. Gone is Smith’s team-leading 24.6 usage rate — the number of possessions a player uses — leaving behind a whole lot of shot creation. Though Horford and some new additions will certainly share the offensive load, Teague, now in his fifth year in the league, will have to move from understudy to leading man, under the direction of new head coach Mike Budenholzer.

“He understands that there is going to be a real emphasis on him [this season], on us playing with pace, us playing a lot of pick-and-roll with the ball in his hands,” says Budenholzer. “To a certain degree, what he does and where he goes triggers a lot of the offense.”

Budenholzer arrived in Atlanta after 18 years with the San Antonio Spurs. He’ll try to give the Hawks the same spacing and unselfish movement that helped make the Spurs a dynasty. In that sort of system, Teague will have to play the part of Tony Parker, San Antonio’s offensive catalyst. That is no easy feat.

Parker is perhaps the most indefatigable, attacking point guard in the league. He uses an endless stream of pick-and-rolls and off-ball screens to free himself for clever finishes around the rim, beautiful floaters, or deadly midrange jumpers. The French guard was one of the best pick-and-roll players in the NBA last season, netting .943 points per possession out of the action, ranking him in the 93rd percentile, per Synergy Sports. It’s an extremely impressive number for any player, but even more so for Parker, who led the league in pick-and-rolls per game.

Teague, on the other hand, was on the opposite end of the spectrum when it comes to pick-and-roll play. He only averaged .728 points per possession out his pick-and-rolls, ranking him in the lowly 46th percentile in the Synergy database. Those numbers aren’t very flattering, but Teague’s meager output isn’t necessarily a reflection of his true ability. Budenholzer, for one, realizes that.

It’s important to view Teague through the prism of the system he played in under former coach Larry Drew. Diving into the film from last season, it becomes clear Atlanta’s spacing was a big part of the problem. Outside of Kyle Korver, very few of Teague’s teammates showed any urgency to move. Teague did not have much room to operate. On top of that, his ball-screen partners rarely showed great timing or effectiveness in their screen-setting, and there was hardly any consistency in whether they rolled hard to the basket (or in most cases, jogged) or popped into space. This type of chaotic play is why Teague developed a maddening tendency to settle for long-range jumpers, more than a few of which were of the step-back variety.

“It’s critical we create the space for him to attack,” says Budenholzer. “If we’re not, then I’m not doing my job and he’s gonna look at me like I’m a little bit crazy if I’m wanting him to get to the rim and he can’t because there’s 10 guys standing between him and the rim.”

Teague struggled running pick-and-rolls on the side of the floor. On a side ball screen, loosely defined as a pick-and-roll near or below the free throw line extended, teams can typically have two alignments: spread opposite (the three players not involved in the screen stand outside the 3-point line on the weak side) and triangle away (two players stand outside the arc while the second big man positions himself in the opposite short corner along the baseline). Teague and the Hawks were downright brutal in both of those alignments. Because of the direction of the play — a ball handler driving from the side/corner toward four other defenders (the hedging big and all three help defenders) — poor spacing on side ball screens can cripple an offensive attack. Improved floor balance along with an emphasis on simple passes can quickly fix what was a major problem area for Teague last season and drastically improve his overall production.

The Hawks’ recent offseason acquisitions should help in the spacing department as well. DeMarre Carroll is 9-of-18 from 3-point territory (including the preseason), while Paul Millsap will be given the freedom to stretch the floor more than he did in Utah. Those two, along with free agent Cartier Martin (3-of-7 from 3 in the season opener) and Korver should help Atlanta carve out those much-needed driving lanes Teague requires to aggressively attack the rim.

But a renewed emphasis on spacing won’t be the only thing needed to vault the Hawks’ point guard into elite status at his position. Teague has to do some of this himself. Unlike Parker, who is great at a number of finishes, Teague is merely adequate across the board.

[All numbers according to Hoopdata]

No guard in the league works harder than Parker at getting the most out of every pick-and-roll. If Teague is to elevate his game, routinely settling for those long-range jumpers must be a thing of the past.

“We’ve been talking about how important it is for him to attack and collapse the defense,” says Budenholzer. “Hopefully we’re creating the proper spacing as often as possible for him to do that.”

The Hawks are in unfamiliar territory this year without Smith, but it doesn’t mean they are going to take a step back. As we’ve seen over the past few seasons with the Spurs, an attack geared around great point guard play out of pick-and-rolls, unselfish ball movement, and good shooting can make a team quite formidable. If Teague’s 24 points and nine assists on opening night against Dallas is any indication, Atlanta could be unleashing a potent offensive force on the league this season.