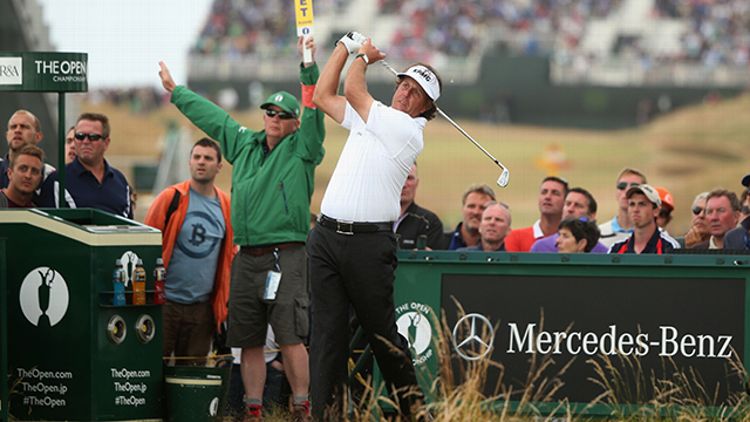 Phil Mickelson’s stunning come-from-behind victory on Sunday in the Open Championship was as unlikely as it was impressive. Picking between crowning moments in Mickelson’s lofty career was already difficult enough, but that final-round 66 — highlighted by that incredible run of four birdies over the final six holes — might qualify as the pinnacle of Lefty’s run. For such an aggressive player to conquer a links course is one thing, but Muirfield? Just staggering.

Oh, right! There’s the Z-score method, which I first wrote about after Rory McIlroy’s U.S. Open victory in June 2011. Traditional scoring only measures performance versus par and awards a winner by virtue of having the best score, but since there are no adjustments for the quality of the course or the competition, finishing 15-under at one course doesn’t translate into anything at a more difficult course.

The Z-score (or standardized score) compares a player’s performance to that of every other player who finished four rounds at the same tournament over the same four days, producing a far more accurate idea of how a player performed versus his peers. If the winner produced a final score of 15-under on a course where the average score was 2-under, he won’t grade as well as one who produced a 15-under on a course where the average score was 6-over. By considering how all players did over those four days, the system inherently adjusts for the difficulty of the course and the quality of the opposition.

That’s where the system was when we last spoke about golf. It produced Z-scores that were very meaningful, but weren’t easy to comprehend. If I tell you that a golfer produced a Z-score of -2.03 in a tournament, you might happen to know that such a score is great, but there’s no translation into a golf score. And by translating all these scores into golf scores, it’s possible to produce scores that stretch across course types and tournament situations.

So, that’s what I did. (Math coming.) I took every Z-score produced by each player in a given year and produced an average tournament score from that figure by using the average four-round score and standard deviation for each tournament from that year. (The database I use starts in 1970, when scoring was higher than it is now by about six shots per four rounds.) That new shot total then yielded a total above or below par for an average tournament with an average set of players from the given year.

You know who would be a perfect example of how this system works in 2013? Phil Mickelson. You just saw Mickelson’s win at the Open; it was brutal, grueling golf on one of the world’s most testing courses. Mickelson was the only player to finish under par, and the average score for players who finished the tournament was 9.5 shots over par.

Contrast that to Mickelson’s win in February at the Phoenix Open, where he shot an opening-round 60 and eventually finished with a 28-under 256. Not a single pro who made the cut finished with a score above par. It’s a testament to Mickelson’s ability that he was able to win in such drastically different contexts, but which of these two performances were really more impressive statistically?

After you adjust for the average score and the standard deviation of the finishers in each tournament, it’s revealed that Mickelson’s Z-score in the Phoenix Open was minus-3.04, just a bit ahead of his minus-2.70 score from the Open Championship. When you translate those scores into the context of an average tournament from 2013 (282.1 shots per four rounds with a standard deviation of 4.7), Mickelson’s course-neutral score from the Phoenix Open was 14.4 strokes under par, while his heroics at the Open Championship produced a score of 12.8 strokes under par. You can say the performance in a major is more meaningful, and I won’t argue with you, but in terms of sheer output versus the rest of the players who suited up to play in each of those tournaments, even after you adjust for the difficulty of the courses, Mickelson was slightly better in Arizona than he was in Scotland.

Don’t mess with Mickelson at Pebble Beach! (He’s only being compared to pros who made the cut with those numbers, by the way.) His performance at the 2001 PGA Championship would have been good enough to win nine of the 11 subsequent PGA Championships, but as Mickelson showed off this past weekend, timing is everything.

That also comes up if we try to calculate the best four-round performance in major history, since the third-best performance is one that wasn’t enough to come away with a victory. That came back in 1977, when Tom Watson and Jack Nicklaus finished 1-2 in that year’s Open Championship at Turnberry. They shot 12-under and 11-under, respectively, during a tournament in which only one other player was below par. Translated to an average group of 1977 players in an average 1977 tournament on an average 1977 course, Watson shot 19.1 strokes under par for a 268.7 score, while Nicklaus was just behind at 18.2 strokes under par. Even after adjusting for era, the best major performance still belongs to Tiger Woods, whose dominance of the 2000 U.S. Open produced an adjusted score of 261.3, 21.2 strokes under par.

Was it the best final round in major history? In terms of breaking away at the right time, maybe, but graded in terms of how Mickelson did over the full 18 holes, it wasn’t particularly close to being the best. Mickelson shot a 66 on a day when the average score was 73.2; that’s impressive, but consider that during the opening round of this very same tournament, Zach Johnson shot a 66 when the average score for those golfers who would eventually finish all four rounds was a 72.6. Mickelson’s round was better, and the best of the tournament, but not so much so that it would seriously challenge the greatest major rounds of all time.

The best final round in a major since 1970 belongs to Johnny Miller, who comes up a lot in these sorts of best-blank-ever discussions, as his performance in the 1975 Phoenix Open ranks by this measure as the greatest 72-hole tournament since 1970. There, Miller produced a course- and era-adjusted score of 24.6 strokes under par. Back to the majors, though. In 1973, Miller shot a final-round 63 to win the U.S. Open on a day when the average score was more than 10 shots higher, at 73.8 strokes. Only one other player besides Miller shot better than 68. To top Miller, Mickelson would have needed to shoot a 62 on Sunday. That’s how impressive Miller’s final round was back in ’73.

The best round in a major over that timeframe? Well, that belongs to golf luminary Steve Stricker, who picked it up in a tournament he didn’t even come close to winning. Stricker’s 63 during the opening round of the 2011 PGA Championship was a full 3.5 standard deviations below the mean performance of 70.6 strokes by golfers who ended up finishing 72 holes that week. He went 74, 69, and 73 the rest of the way to finish at 1-under and tied for 12th place.

So, maybe it was merely one of Lefty’s best performances ever. You know what? I don’t think he’s complaining.