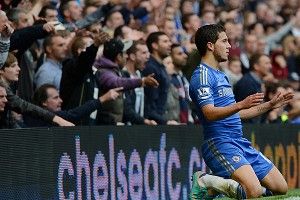 Nineteen minutes into Chelsea’s 2-1 win over Arsenal earlier this season, Eden Hazard had already suffered five fouls. The Belgian attacking midfielder was giving the Arsenal defenders fits because it wasn’t clear if Hazard was playing on the left wing, the right wing, or as a deep-lying playmaker. The truth is, he was playing all three. While the two goals came from set plays, it was the fluidity of Chelsea’s movement that caused Arsenal trouble throughout the match as Hazard, Juan Mata, and the 20-year-old Brazilian Oscar were putting on a show that had rarely been seen during the Roman Abramovich era.

So far this season Chelsea have played the kind of attractive football they have been so good at stifling opposition sides from playing. The arrival of Hazard and Oscar has given Chelsea the dynamism and style they previously lacked. Hazard, the two-time Ligue 1 Player of the Year, has taken little time to adjust to English football, having scored two goals and registering four assists already. Oscar, 21, plays with an intelligence that defies his age, announcing his arrival in European competition with two goals against Juventus in his first Champions League match. There are also indications that the career of Fernando Torres — who recently admitted that, last season, things got so bad that he stopped caring whether Chelsea won or lost — has been revived. So far Torres hasn’t had to worry about Chelsea losing — the team is undefeated and sitting atop the Barclays Premier League table.

This was supposed to be a season of rebuilding for Chelsea as they ushered out the generation that brought them their improbable Champions League trophy last season. Didier Drogba plies his trade in China and there is talk of Frank Lampard potentially joining an MLS side when his contract is up. The club is still unwilling to give Ashley Cole his desired multi-year contract extension and John Terry’s well-publicized racial abuse case now makes the “captain, leader, legend” mantra a little hollow.

The old Chelsea sides owed their success to clinical efficiency, a kind of means-to-an-end football that was emphasized during Jose Mourinho’s tenure and persisted long after.The Champions League victory last season was perhaps fitting because it was emblematic of an era of Chelsea football: all-hands-on-deck defending with an eye for an opportunistic goal when an opponent least expected it. It was the former Arsenal captain Cesc Fabregas who once said that Chelsea would lull you to sleep then break as if they were on motorbikes for a counterattacking goal. Nowhere was that more evident than Didier Drogba’s goal in the first leg of the 2011-12 Champions League semifinal against Barcelona.

Just a few weeks into the Premier League season and it appears that the old Chelsea is behind us. The new Chelsea side is managed by Roberto Di Matteo. But it is possible that, after spending more than a billion dollars, the side is finally one that owner Roman Abramovich, along with the rest of the world, can love.

They might not yet have the mechanical brilliance of Barcelona, but what Chelsea has is something more dynamic than the death-by-a-thousand-passes Barca approach. Chelsea play three attackers behind Torres. They have no defined positions; Mata, Hazard, and Oscar are free to set up shop wherever there is space, and it leaves defenders confused regarding whom they should pick up.

Having midfielders who keep the ball on the ground has made Torres more dangerous this season, and he has shown flashes of the player he once was while playing for Liverpool. Chelsea’s fullbacks have also benefited from the new attacking style. Right back Branislav Ivanovic has already equaled last season’s league goal tally with three, and Ashley Cole scored the winner in a tough match against Stoke earlier this season.

Chelsea will try to make it seven wins out of eight this season when they take on Tottenham on Saturday. In the opposing technical area will be former Chelsea manager Andre Villas-Boas. In his short time as Blues boss last season, Villas-Boas recognized the need to change the way Chelsea played, but his heavy-handed style did not go over well with the older players in the dressing room, and he was eventually fired. Villas-Boas can feel somewhat vindicated when he looks at the way Chelsea play now; it’s the kind of style he wanted to implement. This weekend, he will have a front-row seat to see what his version of Chelsea, a new Chelsea, might have looked like.