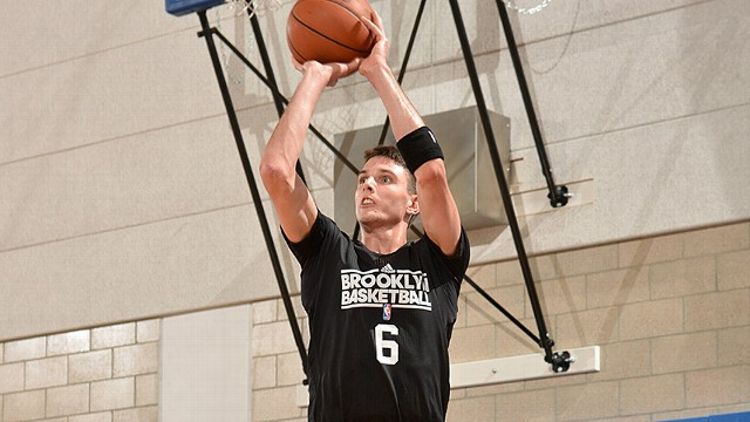 Most fans view summer league as something of a basketball barometer. If a guy can play — whether he was a top pick, a second-round wild card, or an unsigned outcast — he’ll show it in summer league and find his way onto an NBA roster. If he can’t, well, Europe, China, or the D-League awaits. It would be a mistake, however, to make things that simple, especially for unsigned free agents battling for their basketball livelihood. Plenty of players who don summer league jerseys in hopes of landing a prized NBA contract are more than capable of adding value to franchises across the league. When some players fall short, it can’t always be attributed to a lack of talent or skill.

“There’s a lot of guys out there [at summer league] that don’t make the NBA that are definitely good enough to make the NBA,” says former Phoenix Suns GM Steve Kerr. “There a lot of good players out there. And some of it is right time, right place.”

There may be no player who embodies Kerr’s sentiment better than Matt Janning, a player Kerr himself brought onto the Suns’ summer league roster just before leaving the franchise in 2010. The 25-year-old undrafted free agent from Northeastern is a wily veteran of the summer league circuit — the Bulls squad Janning plays on now is his sixth team in three summers (over a span of four years because one summer was lost to the lockout). A skilled combo guard who already had a cup of coffee with the Suns, Janning isn’t plying his trade in Las Vegas and Orlando in a vain attempt to land a job. He’s one of those players caught up on the NBA fringes, showcasing his skills in hopes that he can find that right-time, right-place scenario that allows him to reach his NBA dreams.

If you follow a traditional box score, Janning’s value to franchises across the league won’t be readily apparent. He doesn’t fill up a stat sheet as much as he allows his teammates to do so. Janning is an adequate defender on the ball and a good scheme defender who does just enough on that end to not take away from his value as the ultimate role player on offense. Armed with an accurate outside stroke (Janning shot better than 39 percent from deep in his combined attempts during the Euroleague and Italian league last season), a solid handle, and the ability to function as a playmaker out of pick-and-rolls for his teammates, Janning is something like J.J. Redick lite. In a league that now demands its role players to move the ball, make outside shots, and play within a scheme defensively, Janning has the potential to be a solid end-of-the-rotation-type player for a team willing to give him a chance. It’s that opportunity, however, that’s been hard for him to find.

Janning’s summer odysseys are something of a broken record. He heads to Vegas or Orlando, puts on a steady, team-oriented performance, then waits for the training camp invites to roll in. An offer to join an NBA team for camp isn’t all it’s cracked up to be, though. Someone like Janning can accept the invite, receive a small guaranteed sum (between $0 and $50,000), then compete for maybe one or two spots. For every Chris Copeland, there are dozens of NBA hopefuls who find themselves scrambling for new employment near the end of October. At that point, all the high-paying jobs in Europe and China have been taken, and the next option becomes the D-League and its $24,000 max salary. Those limited sums stand in stark contrast to the European jobs available at the beginning of August, where salaries range from $50,000 to a high six figures (Janning has made just more than $100,000 in each season in Italy). What started as an emotional quest to live a dream quickly becomes a calculated financial decision for players like Janning — either stay close to the NBA and endure the rigors of D-League life, or cave to the allure of financial security.

“It’s a tough call.” says Kerr. “You come out and you want to make some money, obviously, and if you have an opportunity to get a guarantee overseas, how do you not take that?”

Another overlooked element is that it’s not easy for a young player to feel the sting of rejection. In his first year out of college, Janning made it through camp only to be released early in the season because of an injury to Suns center Robin Lopez. It wasn’t an indictment of his talent; Janning just was the only guy unfortunate enough to have a deal that was guaranteed only if he played the whole season. “It was one of the toughest things I’ve been through as a person and obviously in my basketball career,” says Janning. “I’d never been cut from a team before. I went home — back to my place in Phoenix — that night and just kinda sat on the couch and stared.”

After receiving his walking papers from the Suns, Janning began his trek through the D-League that season. He started out in Maine but was traded to Rio Grande Valley halfway through the season. Though his team reached the D-League finals and Janning mentioned his time with Rio Grande Valley in particular as an overwhelmingly positive experience, basketball’s minor league is tricky terrain for players not attached to an NBA parent organization. If he stayed in the the D-League, it would have meant Janning was once again subject to the whims of whatever NBA organization(s) was affiliated with his current team. A first-round pick needs playing time? Move over, Matt. The team wants to see how another potential call-up fares in a bigger role? Time for a minutes reduction. That is how a potential NBA contributor like Janning ends up in Europe: more money, a bigger role, and, especially when it comes to the Euroleague, superior competition.

As fans, we often tend to evaluate players in a vacuum, forgetting that there is a human component to this. Janning isn’t just a 6-foot-5 composite of basketball skills; he’s a 25-year-old young professional looking to make a living. Sometimes it means putting his NBA dreams on hold to make a sound financial decision.

“Obviously my goal is to make [an NBA] roster. That’s first and foremost,” says Janning. “But I think the way I played in my first two years overseas has really set me up very well to keep a good job overseas. It’s a tough decision to make every year.”

This year won’t be any different. The Bulls have roster spots open and have given Janning a shot to play decent minutes, but there will likely end up being just a handful of teams that extend him nothing but a camp invite. Once again, he will be forced to weigh the risks of bypassing financial security for a realization of his childhood dream. So even though we may never see Janning in an NBA jersey, just know that it doesn’t mean he wasn’t good enough to wear one.