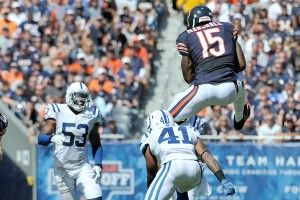 Bears (+5.5) over PACKERS
If you watched the Bears thrash the Colts on Sunday, you couldn’t help but notice Jay Cutler throwing the football to new teammate Brandon Marshall over and over and over again. It happened 15 times in all, with Marshall catching nine of them for 119 yards and a score. Sometimes Marshall was wide-open; sometimes he had two guys draped over him. Cutler didn’t care. He kept chucking it to him as Bears fans thought to themselves, My God, is this what it’s like? Is that what we were missing?

• Johnny Morris is Chicago’s all-time receiving yards leader with 5,059 yards. Harlon Hill is second with 4,616 yards. Both retired before I was born.

• Chicago’s all-time single-season leader for receiving yards is somebody named Marcus Robinson. He finished with 1,400 yards and nine TDs in 1999 and never topped 800 yards again.

• In the past 40 years, only four Bears have topped 1,000 receiving yards: Robinson, Marty Booker, Curtis Conway and Jeff Graham. Only Booker and Conway did it twice.

• In the history of the Bears franchise, eight Bears have caught 10 touchdowns or more. Only once did someone do it after 1970 — Conway’s 12 TD catches in 1995.

• Chicago’s most “famous” receiver of the modern era is probably Willie Gault … whose best fantasy season (1983: 836 yards, eight TDs) would have netted you exactly 129.6 fantasy points.

• Mike Ditka finished with more receiving yards (4,503) playing as a tight end than any Bears receiver since the AFL and NFL merged in 1970. Yes, that Mike Ditka.

Barring injury or an unfortunate off-field incident, there’s a better-than-good chance that Marshall will push the preceding few paragraphs into “Remember Chicago’s history with wide receivers before they lucked out with Brandon Marshall?” purgatory. We knew it could happen — it’s the reason people kept bidding Marshall up in fantasy drafts. We knew he thrived with Cutler once upon a time in Denver, that he was saddled with dreadful QBs these past two seasons, that there was just enough “Moss in 2007” potential to make him intriguing. We also knew he was a bit of a loon, a never-ending threat to show up on the bottom of ESPN’s ticker with the words “BREAKING NEWS” and “last night at 4:30 a.m.” involved. That’s the reason they were able to steal him for two measly third-round picks, and that’s the reason he probably went for $35 in your auction. The fact remains, only three receivers jump off the TV screen right now: Marshall, Julio Jones and Calvin Johnson. They’re a little bigger and a little faster than everyone else. The Bears never had anyone like that before. Now they do.

And maybe this didn’t become a major story on Sunday because RG3, Peyton Manning and San Francisco’s defense swallowed up the attention. But tonight? Playing against a Packers team that got beaten up by the physical Niners just four days ago and couldn’t stop Alex Smith? I’m grabbing the points. As well as some “Brandon Marshall will eventually be remembered as the best Bears receiver ever” stock. It’s still going relatively cheap. (But not for long.)