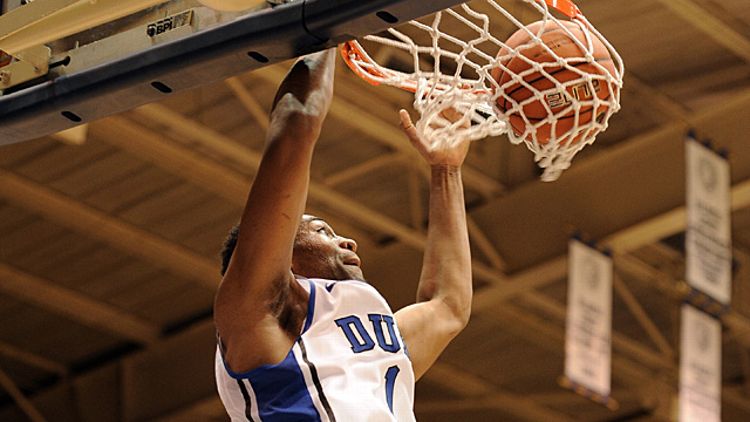 College basketball is back, and life finally makes sense again. Questions like “Where did all my money go?” and “Why am I such a disappointment?” and “How did I end up in this Dumpster?” no longer matter. Nothing matters, actually. Our salvation has arrived, and if you think I’m being overly dramatic, then you can get the HELL out of my Dumpster, pal.

As the headline on this post suggests, I recommend that you all take out the paper calendars you use to help remember when to watch sports (mine is the flip kind with autumnal photos above each month), and find a good, reliable pen, because you’ll want to write this down. Below, I’ve listed the best possible games from each of the next seven days, along with some honorable mentions. Consider this your weeklong immersion guide. And it starts, as it should, in the mecca of the sport …

Davidson at no. 4 Duke (ESPNU, 7 p.m.)
Call me a homer if you will, but this is the most interesting game of college basketball’s opening night. Not only will it be our introduction to one of the fastest, youngest, and most exciting Duke teams in recent memory, but we’ll get our first chance to see Jabari Parker, who might be the school’s best freshman since Kyrie Irving. And Davidson is no slouch, either. The Wildcats are the most underrated mid-major in the sport. That’s largely because they play in the Southern Conference without a ton of competition, but winning seven of the last 10 regular-season conference titles is a great feat no matter where you are. Bob McKillop’s team is rebuilding, but it retains De’Mon Brooks, the SoCon Player of the Year in 2011-12 and holder of one of the coolest names in the sport. (A “demon brook” can only be a stream of lava, right?)

Oregon is a team chock-full of transfers like Joseph Young (Houston’s leading scorer last season with 18 points per game) and UCLA/UNLV transfer Mike Moser (he just loves all colleges). Combined with two returning starters inside that bring decent size to the table, the Ducks will have their sights set on Arizona in the Pac-12. Georgetown returns four starters, but the one it lost, Otto Porter Jr., is a biggie. However, John Thompson III has shown again and again that losing talented players (usually more than just one) isn’t a death blow, and it’s surprising to see last year’s Big East regular-season champs get so little respect in the rankings. This game, which will be played on a military base — camo unis included — in South Korea, has “upset” written all over it. (“Upset” is in quotes because Vegas apparently cares not for your rankings, AP. Georgetown is favored by 4.5.)

UConn vs. Maryland is entertaining primarily because it pits a team that desperately wanted to get into the ACC against a team that wanted to get out. It’s hard to tell how good Maryland will be, but the Terps are huge at most positions. And by huge, I mean both tall and bulky, but especially bulky. Sophomores Shaquille Cleare and Charles Mitchell are both over 6-foot-8 and 260 pounds, and they join two tall, talented wings in Dez Wells and Nick Faust. If Mark Turgeon has one thing, he has depth, and Maryland’s final year in the ACC could be a surprisingly strong farewell tour. As a Duke fan, I’m secretly thrilled there’s no trip to College Park on the docket, though it hurts to go out with a loss. (More on UConn below.)

The champs! Russ-diculous is back, and even though Rick Pitino lost Gorgui Dieng and Peyton Siva, the man is still thinking dynasty. And well he should, because he also returns Wayne Blackshear and Montrezl Harrell, along with super-sub Luke Hancock, the man who saved them in the Final Four. A lot will depend on how well transfer point guard Chris Jones, the reigning Juco player of the year, leads the offense in Siva’s absence.

I still have no real idea what Root Sports is, and I’m pretty sure I won’t get it on the East Coast, and I’m just calling this game a “mention” since, like a coward who fails to show up for a pistol duel, it has no honor. Or something. But New Mexico, as you’ll remember, is from the ultimate hipster conference, the Mountain West. Like any good hipster phenomenon, though, there’s bound to be a backlash, and New Mexico’s no. 23 ranking is the proof. It returns four starters, including MWC Player of the Year Kendall Williams. Doesn’t it deserve better than 23?

We’re really scraping the bottom of the barrel on Sunday, but hey, check out Notre Dame in its first official game as a member of the ACC! The Irish lost Jack Cooley (for the record, I’m not the only one convinced he was a Luke Harangody clone), but like Georgetown, they return four starters and are likely to have a lot of success in the ACC with their highly disciplined, methodical style. (Read: They play super slow, so whatever you do, don’t watch them when they play Virginia.)

I loved this Arizona team last season, but the trio of big freshmen understandably had to survive some growing pains, and the Cats struggled on the road in conference play. They still came super-close to making the Elite Eight anyway, and now Brandon Ashley and Kaleb Tarczewski are back (Grant Jerrett weirdly went pro despite starting two games all season), along with super-dunker Nick Johnson, and Sean Miller has the best team west of the Mississip. (I still think of things in terms of where they are in relation to that river, and I refuse to pronounce the last syllable.)

Long Beach State has one of the most interesting stories in the country. Dan Monson won the Big West Conference regular-season crown and earned himself Coach of the Year honors last year, but his team was plagued by discipline problems, and when it lost to Baylor by 46 in the NIT, he booted three of this best players off the team.

Another year, another strong Gonzaga team that will probably win the WCC. It lost Kelly Olynyk, but returns Kevin Pangos and 7-foot-1 Przemek Karnowski, who is supposedly bigger and badder in his sophomore year (and he was actually pretty good as a freshman).

At CSU, Larry Eustachy’s fine year in the Mountain West earned him an extension until 2017-18, but he’ll have his work cut out for him with five brand-new starters.

Whoa. What a night in Chicago at the State Farm Champions Classic. First you have a dream clash between the top two teams in the country, then you have Jabari vs. Wiggins in a battle of the best freshmen in the sport. I don’t think I need to promote this at all, except to say that if Kentucky wins, I can guarantee that John Calipari’s Cats will go 40-0 and win a national title.

Are you kidding me? More delicious basketball? Simultaneously?? How will I decide what to watch? I guess I’ll just watch the better games, right? That seems like the best choice?

Seriously, though, these will both be incredibly interesting style-clash games, and it’s too bad they don’t happen Wednesday, which (SPOILER ALERT) sucks. The main thing I have to wonder is how Wisconsin will deal with the new freedom of movement initiative. We could easily see 60 fouls called in this game, in which case it’s a good thing there are bigger marquee games to watch other than the bloody war of attrition in Madison. Bo Ryan considers it unmanly to score more than 45 points per game, while Florida is exactly the kind of fun, swaggering team that has the potential to lose a heartbreaking Elite Eight game. Billy Donovan’s squad features bad boy Scottie Wilbekin and shutdown post defender Will Yeguete, plus a new and possibly explosive talent in freshman point guard Kasey Hill.

As for VCU-Virginia, this will be a great test as to whether the Cavaliers deserve that top-25 ranking. Tony Bennett’s teams lovvvve to play slowly (his dad was Bo Ryan at Wisconsin before Bo existed), and Shaka Smart’s havoc defense lovvvves to make slow teams hurry and leave their comfort zone. As I wrote last year, the brilliance of Smart’s system is that it refuses to let a slower team set the pace (no easy task in this sport), and even though this game’s in Charlottesville, it’ll be tough for the Cavs to keep their composure. A lot will depend on the performance of All-ACC guard Joe Harris, who averaged 16.3 PPG last year and is one of the steadiest performers in the conference.

I won’t lie to you, Grantland readers, at least about anything important. I may tell the occasional white lie to make you feel good about yourself or to avoid something awkward, but in general I’m dedicated to being honest. So I’ll tell you right now that Wednesday isn’t a great day for college basketball. But it’s another good chance to see Oregon and fall in love with the Ducks to the extent that you forget everything else and pick them to reach the Elite Eight in March, and then throw a hammer through your apartment window when they lose 55-51 to BYU in the first round.

This could be an OK football game, though Florida State would still annihilate UCF. On the television listing for this game, it just says “ESPW.” I could probably do some research to clear up exactly what that means, but I think it’s funnier to assume the game will somehow be broadcast on ESPNW, the website dedicated to women’s athletics. (Note, the game is actually also on ESPNEWS) Tune in to see the Florida State men’s team in action! The question for the Okaro White–led Noles is whether the defense can see a return to the glory days after a disappointing season in 2012-13.

Look, average American viewer, you’re not fooling me. I know that deep down, beneath the macho exterior and the BCS posing, you crave some hot mid-major action. Why not just admit it? You could do a lot worse than Wichita State, which features former walk-on and frequent star of medieval film dramas Ron Baker, one of last season’s Heroes of March. He helped lead the Shockers to the Final Four, where they nearly beat eventual champ Louisville.

And as for the William & Mary Tribe? They are one of very few D-I teams with a nickname that does not end in the letter “S,” is not an animal, and contains no color.

Unfortunately, you might have to search for an Internet stream at 8 p.m. ET to get your mid-major fix. But let’s not pretend it’s the first time that’s happened, ya sicko.

Shabazz time! UConn got hit really hard by conference alignment, ending up in the AAC (what?) with teams like USF and Rutgers and Holy Scriveners Technical College, but that doesn’t mean it can’t make a dent. Shabazz Napier will be the head honcho at point guard, and Kevin Ollie proved last season that he’s the right man to lead this team. UConn is postseason eligible again and could end up being one of the feel-good stories of the season. It should come down to the Huskies, Memphis, or ACC-bound Louisville for the conference title.