‘Look At Me!’ A Rant Against Excessive Celebrations 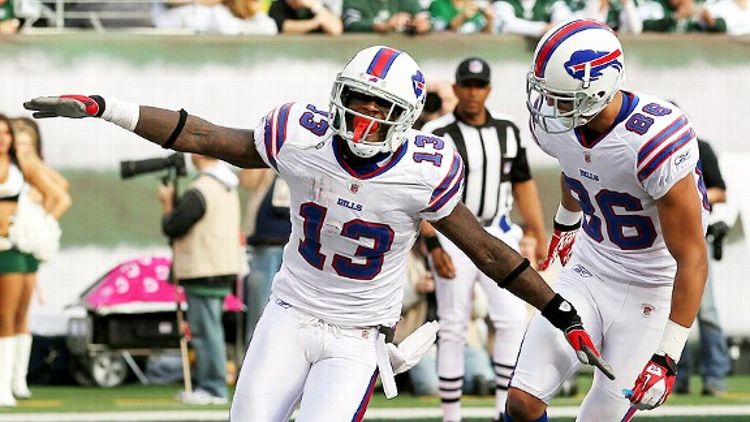 There is a God-awful part of the already ridiculous film Jerry Maguire when Tom Cruise’s character and Cuba Gooding Jr.’s character tearfully hug after Cuba’s character gets hurt making a touchdown catch, comes to, and then dances in the end zone.

This part is particularly obnoxious for many reasons. Cuba’s character is an egomaniac who is making millions, yet wants more. Following his end zone celebration, his character is offered a multi-million dollar contract. WHAT. THE. HELL? I’m going to refrain from going off on the rest of that lame-ass movie, but I have made my feelings clear. Acting like a jackass after successfully doing your job, then being rewarded for your stupidity is unreal. The worst part is, the players who seek attention from us always end up getting it. Dancing with cheerleaders, pulling cell phones out, signing the football … the list goes on.

Just last month, we watched Buffalo Bills wide receiver Stevie Johnson score a touchdown (which is his job), dance, and then pretend to shoot himself in the leg (a direct slam at Plaxico Burress’ 2008 incident at a New York nightclub). THEN Johnson held his arms out like he was an airplane crashing to the ground. The team suffered a 15-yard penalty for Johnson’s actions and he was fined. Was it worth it, Stevie? I mean, it got you the attention you so desperately wanted, but OH MY GOD your actions in the end zone did nothing but make you look like a complete and total idiot.

There are some athletes, past and present, who were/are particularly annoying to watch on/off the field, Chad Johnson (I’m writing “Johnson” instead of “Ochocinco” because I can’t bring myself to call him a word that doesn’t even mean 85 in Spanish), Terrell Owens, Jim McMahon, Deion Sanders, Joe Namath (remember his fur coats? WTF?) Keyshawn Johnson, Jeremy Shockey fall into this particular category.

Now I’d like to share a personal fact. Before becoming a television news producer, I spent five years as a television sports producer, which I loved. I got to travel to numerous professional and collegiate sporting events and interview players. It was a great job for someone who loved sports, journalism and observing human behavior.

There were certain things I would witness (besides wieners in the locker rooms, I know that’s what everyone is thinking), such as a players slowly walking by trying to get my attention because I was holding a microphone and standing next to a cameraman. I won’t say which player, but one time a well-known NFL player walked past me holding his shoulder pads with his last name facing me, presumably so I would see it was “actually him” and ask him for an interview. I didn’t interview him because he had in fact had a shitty game and the majority of television viewers want to hear from players who played well. It’s true we don’t seek out offensive linemen or punters, it goes without saying that while covering football games, you want to interview quarterbacks, wide receivers, running backs or linebackers. It’s just the way it is.

But if a popular wide receiver has a shitty game, he might not be asked for an interview. After the players shower up, I would always notice the guys who just wanted to get out of the venue and get home. They’re usually wearing jeans and a sweatshirt. But then there’s those players who emerge from the locker room wearing a red crushed velvet suit (I actually saw this), talking loudly and trying to get anyone within an earshot’s attention. They want to be noticed, they are desperate for it. But why? Why can’t people quietly do their jobs? Why make a spectacle of yourself?

Humility is a great quality. I can only imagine these attention-seeking athletes standing in front of their bathroom mirrors practices their end zone celebration and actually believing they look cool. How ridiculous would I look if I was producing my newscast and as soon as it ended, I began dancing and acting like a moron? What if I left the control room and ran out in front of the camera and spiked my script? If someone tells me I did a good job, I always say “thank you.” But I never milk it.

I’m grateful for everything I have accomplished, but I’m not going to brag. My advice to future stars of the NFL: If you are fortunate enough to make a living playing a sport that millions of people love to watch and you make your way into the end zone, act like you’ve been there before.

Jenny Johnson is a television news producer and comedy writer living in Houston, Texas. She’s adorable, foul-mouthed and can do 20 girly-style push-ups. Follow Jenny on Twitter at @JennyJohnsonHi5.

Previously by Jenny Johnson:
In Praise of Derek Jeter’s Love of the Ladies
An Open Letter to Danica Patrick
The Rules of Prayer and Sports