Livin’ for Wiggins: A Kansas Fan’s Plan for Staying Alive Through the Upcoming Jayhawks Season 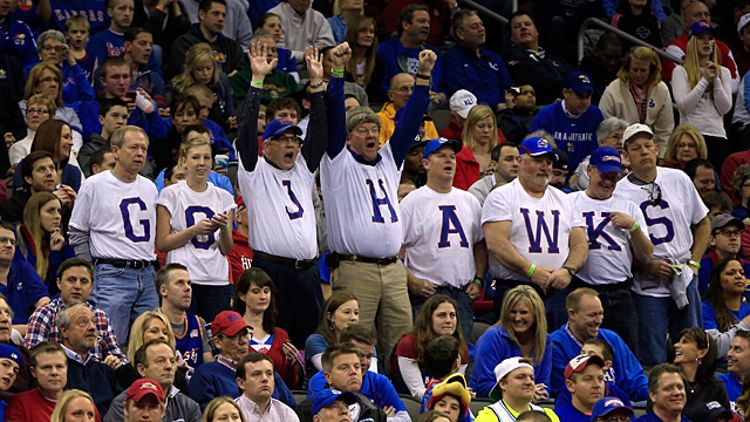 Given that I’m a fourth-generation Jayhawk, it should be no surprise to you that I have no goal, personal or professional, that takes precedent over living long enough to watch this year’s highly anticipated Jayhawks basketball season. To that effect, and in honor of Andrew Wiggins making the cover of Sports Illustrated, I’m making some large life changes to ensure that I’ll be able to view the entire slate of games, which begins October 29 with an exhibition against Pittsburg State. Below, I’ve outlined some of the things I’ll be doing to attain proper mind, body, and spirit; though this regimen applies to the forthcoming, Wiggins-ed out Jayhawks season, you can easily replace the major proper nouns for your own favorite teams or players, unless you’re a St. Louis Cardinals fan, in which case you should jump off the nearest cliff.

Since I’m something of an ordinary, burgers-and-beers guy when it comes to my eating habits, this is one of the areas that could use the most improvement. So, no more Wang Burgers; I’m going full vegan to ensure longevity. It’s tougher to be vegan in Kansas than in, say, the Upper East Side, but again, this is only a six-month span we’re dealing with here — I can figure it out. It helps that road stops like Chicago (where Kansas plays Jabari Parker and Duke on November 12) and Boulder (December 7) will come correct with the vegan options. Eating vegan in the Bahamas or in Waco is another story. I never said this was going to be easy.

Since I’m taking no risks on my quest to live long enough to watch the Jayhawks 2013-14 basketball season, which includes big conference games like a showdown with Marcus Smart’s Oklahoma State on March 1 and a road trip to Waco to face Isaiah Austin’s Baylor Bears on February 4, I need to take care of my body when I’m asleep as well as when I’m awake. So, you guessed it: portable hyperbaric chamber. It’s easier to accept the cost of the chamber (which I am preemptively naming “The Chamber of Secrets,” by the way) when you think about how long a grind we’re talking here — this season could extend well into early April. If you think about it, that’s only a couple thousand a month! People pay that in New York all the time for rent and don’t even think twice about it. How is it possible that none of these is Prime-eligible? Someone (not me) should look into this.

A Note About Hyperventilating

As an asthmatic, a problem for me has been the issue of hyperventilating. A sharp burst of symptoms arose as I repeatedly refreshed a local reporter’s Twitter page and came upon that life-altering status update, and those symptoms only continued throughout the day as footage of that glorious moment came to light.

Andrew Wiggins will be attending Kansas

Since this is a chronic condition, I’ve had to face reality and do my best to control my symptoms. It is a tall order, readers — not only is there the high probability of Andrew Wiggins dunking everything in sight in one of basketball’s signature temples all season long, there’s also the “Wiggins Effect” to contend with.

What are we talking about here? Let me explain: My excitement is not solely centered on Wiggins, but also on all the things that come with his arrival in Lawrence. First you’ve got the off-the-court stuff; the insane media attention, the high profile, and the exquisite magazine covers.

The new SI cover: Wilt, @CoachDManning and @22wiggins, starring in “The Freshman” pic.twitter.com/9rSoQZmBk7

Then there’s the matter of what Wiggins’s presence means on the floor; this Jayhawk team is stacked in a way that it hasn’t been in Bill Self’s tenure.

Teams playing Kansas are going to be so keyed on Wiggins that the other scorers — sophomore forward Perry Ellis, freshman wingman Wayne Selden, junior point guard Naadir Tharpe — are going to go nuts. Selden is 6-foot-5, 250 pounds. This is not your Sherron Collins 250. Selden is ripped and has a neat way of making through-the-legs windmills look effortless. Though Tharpe came on strong at the end of last year, unheralded freshman Frank Mason has played strongly enough in practice that Tharpe needs to step up to secure his starting spot. The 2013-14 Kansas Jayhawks: Even the guys you haven’t heard of are good! And I haven’t even mentioned raw-but-huge-upside guys like Jamari Traylor or JoJo Embiid (who Rick Pitino said could go second in the draft — after Wiggins, of course); sweet shooters like Andrew White and the way-more-athletic-than-he-looks point guard Conner Frankamp; or seasoned bigs like Memphis transfer Tarik Black, who spurned courtship from Duke to play his final season on this Jayhawks squad. And though guys like swingman Brannen Greene or power forward Landen Lucas might not get a ton of burn this year, they’ll be factors for next year’s reload, which has already started with the signing of the explosive Kelly Oubre. [Starts wheezing.] Oh God, no, it’s happening again!

The biggest sacrifice of all will be the forfeiture of my personal life, but when I think about it, my relationship with the Jayhawks predates all others by up to 27 years, so I’m just paying heed to what I learned in Relationships 1. (I wish I had known “No New Friends” as an infant.) And for those friends, colleagues, and family members who have attended places like Georgetown (home game, December 21), Wake Forest (Battle 4 Atlantis, November 28), or any Big 12 school whatsoever, we were never really that close, were we?

Again, my window here is relatively brief and I hope everyone understands the precautions I am taking. Though it’d be nice to think I could pick up where I left off once the season concludes, for all I care the apocalypse could happen the second “One Shining Moment” is over — as long as it’s the Vandross version.