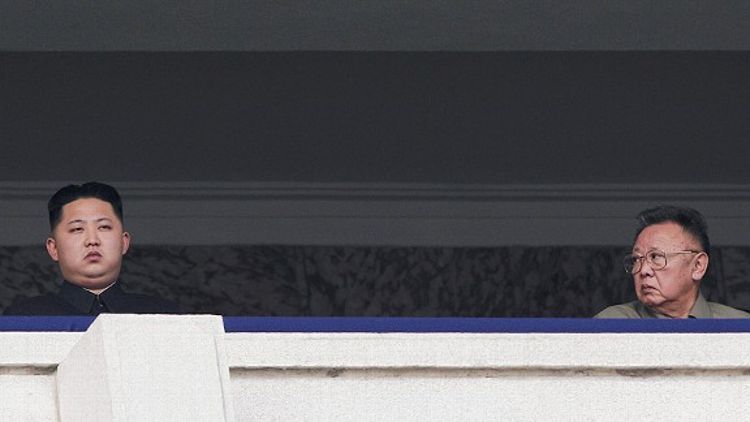 You wouldn’t want to party with him, but at least the Grim Reaper has a sense of irony. Not 24 hours after the death of Czech dissident-turned-president Vaclav Havel, possibly the greatest anti-Communist revolutionary of the 20th century, we learned North Korean dictator Kim Jong Il, the last Stalinist standing, had reached his final (iron) curtain. The symmetry is being noted by many. Havel’s life was dedicated to piercing the upside-down disreality perpetrated by Soviet Communism — his slogan was “may truth and love triumph over lies and hatred” — and he’s definitely the only world leader to say, “I’m even secretly persuaded that if Kafka did not exist, and if I were a better writer than I am, I could’ve written his works.” For his part, Kim Jong Il dressed up the Kafka-esque in platform boots and a bad bouffant, starving his people under the slogan “Prosperous and Powerful Nation” while telling them he could make the weather change with his moods and shoot a 38-under par round of golf.

Word is still out on which of his many supernatural powers the Supreme Leader has passed onto his heir apparent, Kim Jong-un. The information lid on North Korea is so tight that little is known about the dauphin, who has been groomed to command since he was designated a four-star general a few years ago. Before he regularly started showing up at state events with his dad, few photos of him existed, and everything from the schools he attended to his date of birth has been disputed. But biographical accounts indicate he is father’s son in every sense — they look alike, and he’s said to have inherited the family megalomania and viciousness.

He also shares his dad’s enthusiasm for sports. Kim Jong Il was an NBA fanatic, with a special love for the Jordan-era Bulls. He reportedly had a vast video library of Jordan games and, during a visit to Pyongyang in the late ’90s, Secretary of State Madeleine Albright brought Kim an official NBA ball signed by Jordan. (There’s a Facebook group dedicated to getting it back.) His hoop dreams even extended to making basketball a kind of adopted national pastime; a 2006 San Diego Union-Tribune story details a full-scale appropriation that includes giving the game a new scoring system: “three points for a dunk, four points for a three-pointer that does not touch the rim and eight points for a basket scored in the final three seconds. Miss a free throw, and it’s minus one.” The Kim Jong Il NBA connection has not gone un-Tweeted upon: “Breaking news: David Stern blocks Kim Jong IL’s son as successor. For basketball reasons.”

Jong Il passed his obsession down his children, especially the new “Great Successor.” Apparently Jong-un is more interested in sports than politics, or so one of his classmates from the Liebefeld-Steinhölzli School in Bern told the Washington Post in 2009. “He proudly showed off photographs of himself standing with Toni Kukoc of the Chicago Bulls and Kobe Bryant of the Los Angeles Lakers,” said the source, “It is unclear where the pictures were taken. On at least one occasion, a car from the North Korean Embassy drove [him] to Paris to watch an NBA exhibition game.” Another classmate described him as “very explosive.” “He could make things happen,” the classmate said. “He was the playmaker.”

In his shadowy rise to power, Jong-un has followed his father’s example of fusing sports with a nationalist zeal. In 2010, Jung-un was given a guiding role in North Korea’s World Cup soccer team with the hope that its success might be used to legitimize his authority as the future head of state. After the team was bounced in the first round, it was brought onto a stage in the People’s Palace of Culture for a “grand debate,” in which the players were forced to endure a six-hour barrage of criticism before a crowd of 400 people. They were then asked to turn and berate their manager, who was duly shipped off to a work camp.

Some experts have speculated that Jong-un’s school days could lead to more open relations for the isolated, impoverished country. But if the above anecdote is any guide, a George W. Bush-style sniff at his father’s political style doesn’t seem in the offing. Most likely, he’ll adopt the hard-line militarist posturing and anti-American rhetoric his father took to ground his cult of personality when he assumed power in 1994 from his own pops, Kim Il-sung, a move that included accelerating the regime’s efforts to attain nuclear weapons. Takeaway: 23 million people are likely to stay suspended in a Cold War nightmare for at least another generation. In the Kumsusan Memorial Palace, however, a new season of hoops will soon be lighting up the satellite dish.

Previously by Jon Dolan:
Which Minor Bowl Game Are You Most Excited About? (And Other College Football Questions)
Minnesota Basketball: Waiting for Tubby
Adventures in Revisionist History: Big Ten Edition

About Last Night: Lights Out For Big Ben