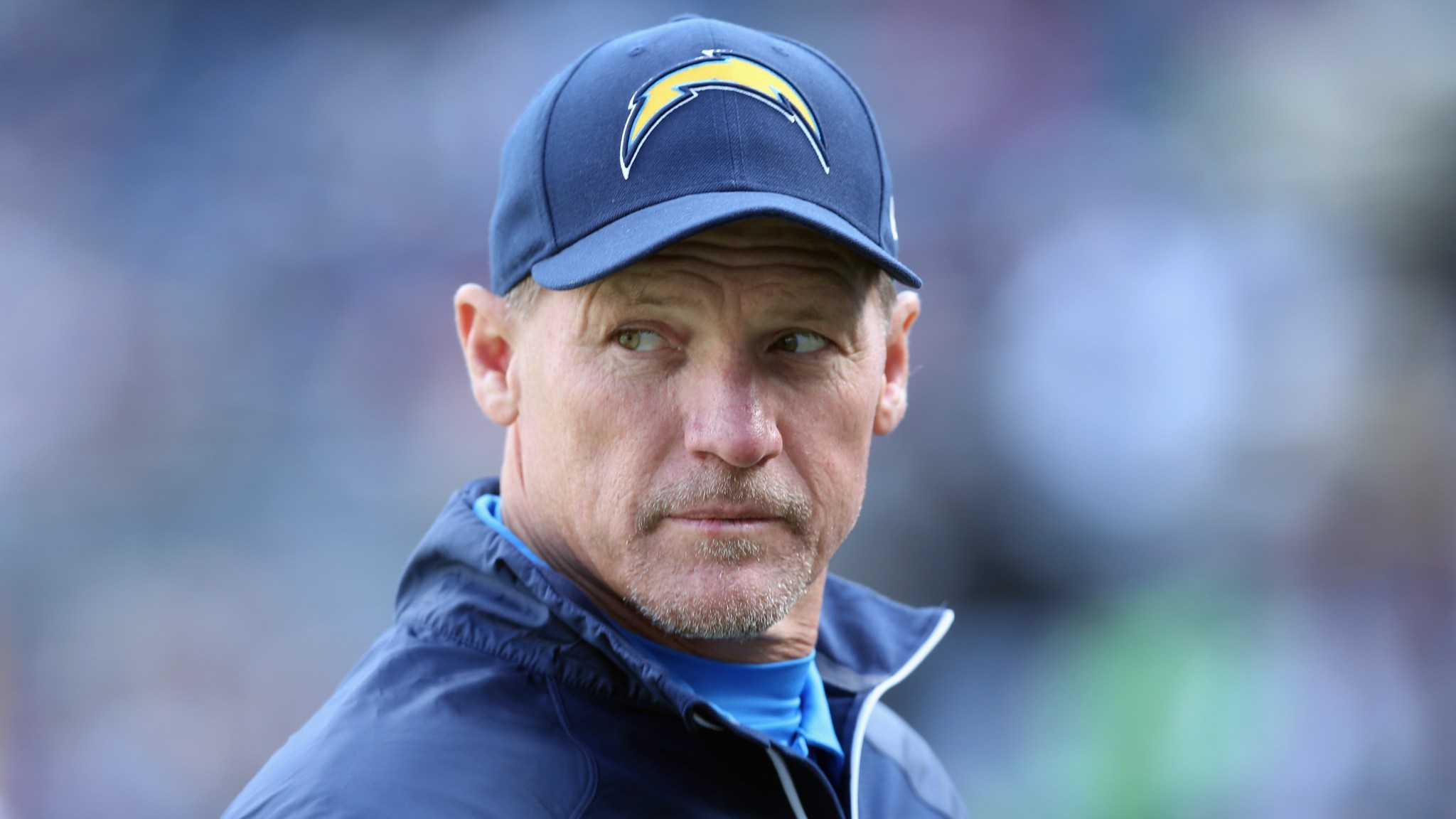 The new combination of Ken Whisenhunt and the Tennessee Titans doesn’t make a lot of sense for either side. I can’t speak for what the Titans were thinking as part of their hiring process, and I think Whisenhunt is a talented coach who can be an asset under the right circumstances, but as currently constructed, the Titans and Whisenhunt seem to play more to each other’s weaknesses than they do to each other’s respective strengths.

Whisenhunt was 45-51 during his time in Arizona, with a 4-0 start to his final season at the helm going for naught when his team lost 11 of its final 12 games, resulting in his dismissal. He then went to San Diego, where he performed admirably alongside head coach Mike McCoy in rebuilding the Chargers’ offense overnight into one of the league’s most devastating attacks. After one year as the San Diego offensive coordinator, Whisenhunt was sought for a number of head coaching jobs, eventually landing in Tennessee.

While he spent only six years in Arizona, it felt like Whisenhunt ran through the same issues over and over again. For the advantages he offers schematically, as a play caller, and as a coach who can mold his offense to his team’s strengths, the former Steelers offensive coordinator seemed to flip-flop back and forth between personnel on a week-to-week basis, destroying his players’ confidence and failing to develop young talent in the process.

Nowhere was that more clearly felt than at quarterback. When Whisenhunt arrived in Arizona, he inherited a team with rookie first-round pick Matt Leinart playing ahead of veteran Kurt Warner, then five years removed from his last full season as a starter. While expected to win, it was also clear that Whisenhunt was brought in to help develop the young Leinart. That didn’t happen. Whisenhunt benched Leinart several games into the coach’s debut season with the team for Warner, then brought him back, only for Leinart to fracture his collarbone and miss the remainder of the season. Warner played admirably in Leinart’s absence, and the following year Whisenhunt wisely chose to stick with the grizzled Warner over the inexperienced Leinart. The Cardinals made an improbable run to the Super Bowl, with Warner playing one more season afterward before retiring.

That’s when the trouble started. With Leinart still on the roster, the Cardinals brought in big-armed passer Derek Anderson as a free agent to compete with their former first-round pick. Anderson was coming off a season in which he completed just 44.5 percent of his 182 passes while throwing three touchdowns against 10 interceptions. He won the job over Leinart, whom the Cardinals then released. Leinart wasn’t good, but neither was Anderson. Whisenhunt quickly soured on Anderson, but without a viable option, he just cycled through his available quarterbacks, starting rookie fifth-rounder John Skelton before turning things over to undrafted rookie Max Hall. The group combined to complete just 50.8 percent of its passes and throw 19 picks against 10 touchdowns.

One bad year quickly became a bad three years. The Cardinals traded for Kevin Kolb, but even when Kolb was healthy, Whisenhunt managed to find a way to bench him for Skelton. The Cardinals split the season with the pair in 2011 before managing to work their way through four starting passers in 2012, beginning with Kolb before transitioning to Ryan Lindley and then free agent Brian Hoyer for the final game of the season.

The Cardinals changed their quarterbacks more than any other team in football over Whisenhunt’s final three years with the organization, and it wasn’t logical. Take one November 2012 example. With Kolb injured, the Cardinals had turned to Skelton, who was struggling mightily with his duties. Arizona hit its bye week and chose to keep Skelton in the lineup despite his issues, ensuring he would get two weeks of reps with the first team in practice. Then, in its first game after the bye against Atlanta, Skelton started the game 2-for-7 and was benched for rookie sixth-rounder Ryan Lindley, who was as awful as you might expect. If Skelton’s leash was seven passes short, why did he get two weeks of practice reps? Why not just install Lindley as the starter and give him those much-needed practice plays with the first team? And why would Skelton — or the subsequently benched Lindley — have any confidence he could play through a bad series? 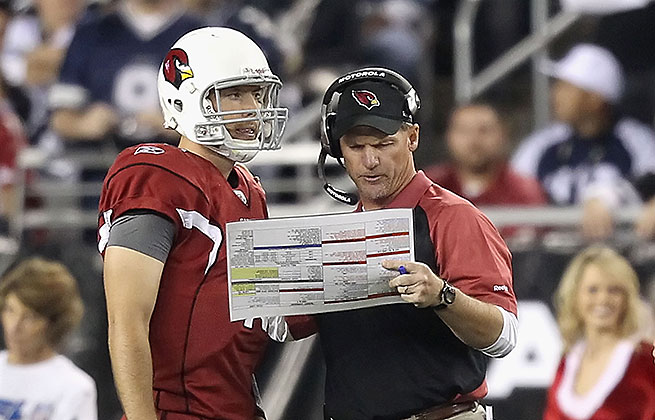 Through that entire three-year run, Whisenhunt repeatedly found the virtues in tall, big-armed quarterbacks who lacked the accuracy required to succeed in the NFL. Virtually every quarterback Arizona brought in, Kolb aside, fit that description to a T. And, of course, Whisenhunt’s now arriving in Tennessee to help develop a tall, big-armed quarterback who has perennially lacked the accuracy required to succeed in the NFL. Jake Locker has a bigger pedigree and way more athleticism than the guys Whisenhunt had in his latter years in Arizona, but he remains a raw talent who doesn’t put the ball where it needs to go on a consistent basis. With Locker in the final year of his rookie contract, can Whisenhunt really change gears and get his quarterback to complete a meaningful percentage of his passes? Or will he go back and forth between Locker and Ryan Fitzpatrick all season?

It seems pretty clear at this point that Whisenhunt can succeed if you provide him with an accurate quarterback. Ben Roethlisberger was more accurate than Locker during his time at school. Warner’s completion percentage was in the mid-60s throughout his career. And Philip Rivers was an extremely accurate passer at North Carolina State, only ever slipping because Norv Turner’s downfield passing attack sacrificed accuracy for big plays, to Rivers’s detriment.

With that in mind, it seems like Detroit would have been a much better fit for Whisenhunt. The Lions were certainly interested in him, but they’re now backtracking from their interest in the way that you do when the object of your affection chooses somebody else. With Matthew Stafford entrenched as the starter in Detroit for the next several seasons on sheer salary alone, Whisenhunt wouldn’t have been able to bench his starter and would instead have been forced to stick with developing Stafford into a better player. While Stafford is renowned for his arm strength, he’s been a more accurate thrower than Locker over a much larger sample of plays.

Instead, Whisenhunt chose the Titans for reasons yet unknown. It’s possible the Lions might not have offered him the same level of control. Detroit’s roster is also basically locked in financially by virtue of the huge contracts given to Stafford, Calvin Johnson, and Ndamukong Suh, meaning that Whisenhunt wouldn’t be able to reshape the team into his liking the same way he can in Tennessee. The Titans were rumored to be interested in Seattle defensive coordinator Dan Quinn to the extent that they were described as “smitten,” but Quinn’s unavailability by virtue of Seattle’s playoff run might have pressed Tennessee to opt for its second choice before he went somewhere else. 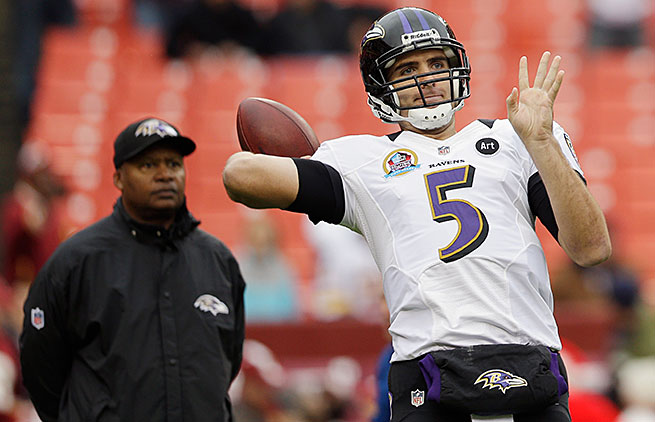 The jilted Lions, meanwhile, have reportedly set their sights on Ravens offensive coordinator Jim Caldwell and, in the way that jilted partners often find their way to exes, former Titans head coach Mike Munchak. Neither coach seems like a particularly exciting option. Munchak’s relatively anonymous tenure in Tennessee was built around clichés and platitudes with little backing when Munchak actually needed his team to act like those talking points. Caldwell is a better candidate in some ways, but his career seems to offer little suggestion that he’s a viable head coach.

Caldwell has received glowing endorsements from former Colts colleagues Tony Dungy and Peyton Manning, but he was their handpicked choice to take over for Dungy in 2009, and while the Colts went 14-2 and made it to the Super Bowl during his first year at the helm, things fell apart quickly. Caldwell was a horrific in-game coach, infamously taking a timeout in the following year’s playoff loss to the Jets that beggared belief. The next year, with Manning injured, the Colts fell to 2-14 behind a dismal season from Curtis Painter, leading to Caldwell’s firing after the season. He took over as Baltimore’s offensive coordinator late in the 2012 season and helped lead it to a shocking Super Bowl victory, with the offense — notably, Joe Flacco — taking a huge step forward in the process.

In his first full year at the helm for the Ravens, Caldwell’s offense fell apart; the Ravens were 25th in points scored, 30th in DVOA, and nearly became one of the few teams since the merger to average fewer than 3.0 yards per carry. Flacco, who had put together an astounding 11-touchdown, zero-interception Super Bowl run, threw 22 interceptions in his worst season as a pro. The basis for hiring Caldwell comes down to his two seasons as a head coach with the greatest quarterback in the history of football under center. In a way, he’s not that much different from Whisenhunt, who looked great with Warner and exhibited little else without him. Sure seems like the path to a great head coach travels through finding a great quarterback first.