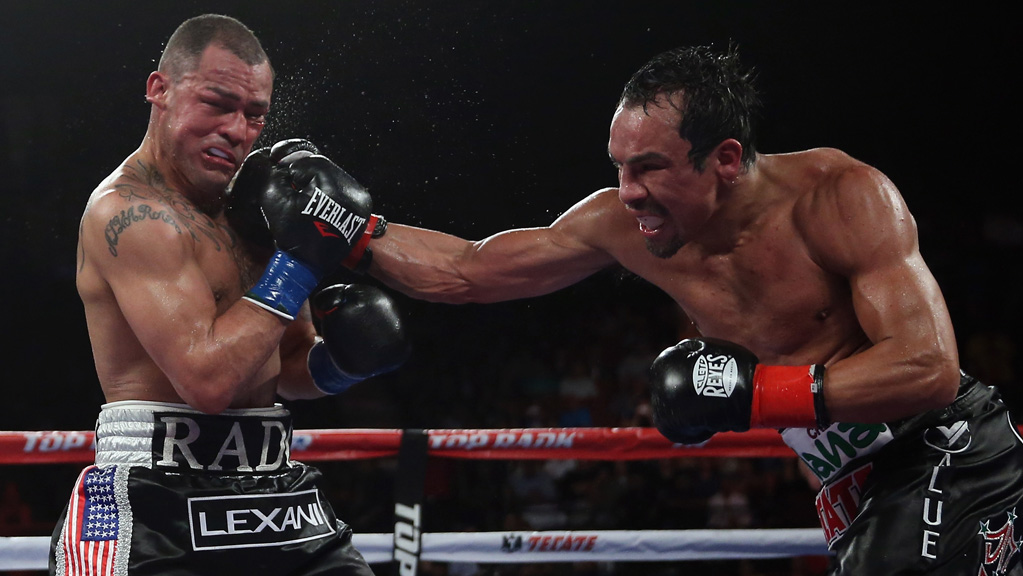 Was outboxing Brandon Rios in the March 2013 rematch of their rumble from the previous year the worst thing that could have happened for Denver junior welterweight Mike Alvarado’s career? OK, “worst thing” superlatives can be overly sensational, but can we at least wonder if the stylistic adjustment Alvarado made to defeat Rios in their second fight has confused Alvarado’s ring identity in some irreparable way? There’s a hint of bitter irony in the possibility that the technical boxing style Alvarado used to get the biggest win of his career may have contributed to his subsequent losses to Ruslan Provodnikov and, Saturday night at the Forum in Los Angeles, to Mexican all-time great Juan Manuel Marquez.

Before Rios-Alvarado II, there was no questioning what kind of fighter Alvarado was. He was a brawler — a big, physically imposing 140-pounder with a strong chin and loads of determination to keep plowing forward and wearing down his opponents with heavy power shots. But in his first clash with Rios, Alvarado ran up against a fellow donnybrook artist, only this one had heavier hands and greater punch resistance. Alvarado got outbrawled. So in the rematch, Alvarado kept a little more distance, circled more, jabbed more, and made more than cursory attempts to prevent Rios from clocking him. It was enough to win a decision and enough to convince the boxing public that Alvarado was more than just a face-first slugger. Alvarado, many experts believed, could be a reasonably effective, somewhat versatile boxer-puncher.

Two fights later, this appears to have been an overreaction. We should probably reclassify Alvarado’s outboxing of Rios as the pugilistic equivalent of DeAndre Jordan besting Chris Dudley in a free throw competition. When Alvarado tried a similar game plan against Provodnikov, the Russian bruiser took it as an invitation to bully Alvarado around the ring and gradually beat him into submission. Before Saturday’s fight, the suggestion was floated once again that Alvarado should keep his distance and “box” Marquez, since Alvarado has a decent jab and he’s taller than Marquez, with a longer reach. Also, aggressive fighters who march straight into Marquez’s brilliant counterpunches tend to end up looking like they tried to head-butt a running Weedwacker.

But Alvarado isn’t a very skilled boxer, and it turns out that being quicker and craftier than Rios — whose foot speed should be measured in whatever exponent of 10 geologists use to track continental drift — means absolutely nothing against other world-class fighters. Alvarado fought the first half of Saturday’s fight at a distance, with his gloves held in a high, tight guard. He didn’t apply much pressure, preferring instead to push out an occasional left jab while Marquez patiently sought openings and capitalized on them with punishing, pinpoint combinations. It wasn’t till later in the fight, when Alvarado started to stalk Marquez and let his punches fly in exchanges, that Alvarado had any success. Yes, Marquez won most of those exchanges — that’s what he does against just about all of his opponents. But Alvarado at least managed to land some meaningful blows when he attacked, and he scored a ninth-round knockdown that infused the otherwise one-sided fight with a jolt of drama. Mike Alvarado, “brawler,” gave himself a chance to win, which is something that Mike Alvarado, “boxer,” never had.

It sucks that we can’t just focus on Marquez, whose ability to connect on four- and five-shot combinations while dodging and deflecting incoming blows is one of the sport’s true marvels. It’s every bit as breathtaking as Floyd Mayweather Jr.’s pure defensive mastery or the improvisational explosiveness of a prime Manny Pacquiao’s two-fisted attack.

But we can’t just gawk in wonderment and appreciation at Marquez, as much as we might like to. Because what kind of 40-year-old man has a chest carpeted with red bumps? And what kind of 40-year-old athlete is drastically more muscular than the 27-year-old version of himself? Marquez’s shoulder muscles possess a perfectly round, striated plumpness — they remind me of a couple of prize-winning pumpkins at the Alaska State Fair, swollen to obscene proportions by the 24-hour summer sunlight.

Marquez might be the most jacked 40-year-old athlete since Kevin Willis, and it would be nice to be able to dismiss suspicions of performance-enhancing drug abuse, but the sport of boxing doesn’t permit us to do that. Advanced PED testing is still administered more or less on a fight-by-fight basis, and there was no indication that Marquez and Alvarado agreed to undergo any kind of random blood testing before their bout. There’s no way to know if Marquez and Alvarado were clean when they entered the ring. It’s possible that Marquez foolishly shaved his chest against the grain Thursday morning and broke out with ingrown hairs; it’s possible that he checked into a bedbug-infested motel for fight week. We don’t know. But one thing we do know is that several boxers have been caught using banned substances in recent years. When we see something suspicious, it’s appropriate to react with suspicion.

The real bummer is that PED abuse in boxing now feels like yesterday’s news, even though the uniform standards of drug screening have barely improved since 2012. That year, several marquee fights were scuttled by positive tests, Nonito Donaire was named fighter of the year partly because he submitted to voluntary, year-round testing, and Marquez debuted his Marvel superhero exoskeleton at the spry young age of 38. The boxing world was abuzz with concern about the PED problem, but after all the sober editorials and hard-hitting investigative reports had been written, the sport just moved on. In 2013, after the ring death of Francisco Leal and the brain injuries suffered by heavyweight Magomed Abdusalamov during an HBO-televised undercard bout, fighter safety became the rallying cry for boxing followers who wanted to display their intelligent fan bona fides. Time will tell what 2014’s big story will be, but chances are it will be different from the previous two, because novelty feels smart and it sells.

3. The Undercard Battle of Taken Villains

If Atlanta Hawks center Pero Antic is slotted as the “head bad guy” for Taken 3, then Saturday’s undercard fighters, Viktor Postol and Selcuk Aydin, are somewhere lower on the sequel’s henchman food chain. Aydin, a Turkish plodder who wades forward in the ring before attacking with wild, lunging left hooks and overhand rights, has the bullet head and beady eyes of a true badass, but aside from the look he doesn’t have much going for him. He’s the kind of afterthought foe whose throat would be crushed by Liam Neeson in 0.4 seconds of screen time during the opening chase scene. Postol, a lanky Ukrainian with an arsenal of tight, clinical punches, has more substance. He’s the Act 2 villain who briefly gets the upper hand on Neeson, then chains him to a steam pipe and slaps him around until Postol turns around, all satisfied with himself, and Neeson raises his legs off the ground, catches Postol in the old Thighmaster lock, and snaps his neck.

So naturally, given their respective positions in the Taken 3 bad guy hierarchy, Postol had his way with Aydin. But before that, the fighters treated the crowd to a couple of moments of delightful cross-cultural incongruity during the ring walks. Aydin entered first, accompanied by 2Pac’s “I Get Around.” Then Postol made his way through the ropes while Tina Turner’s “The Best” blared over the Forum’s PA system. I don’t know what either man was thinking, but I salute them both for making my night 15 percent weirder. As for the fight, Aydin was brave and kept coming forward … and that’s about all you can say for him. He walked into 395 Postol punches, the last of which was a devastating right uppercut that ended the fight in the 11th round.

The majority Mexican and Mexican American crowd of 12,090 was there to support Marquez, who is from Mexico City (and who is an icon to his countrymen and to boxing fans in general). Alvarado is also of Mexican descent, but the fans were there for Marquez. His enemy was their enemy. This meant that when a group of prepubescent break-dancers started hand-gliding in circles in the middle of the ring at the same time as Alvarado walked to the ring, thousands of people chanted “BOOOOOO!” The vast majority of the jeers had to have been intended for Alvarado, but for a minute, it sure did look like the crowd was heckling a bunch of children. Don’t waste too much pity on the kids, though: They were all wearing enormous sets of gold headphones around their necks, and the entire performance was a marketing stunt for Monster, so they deserved it.

Despite having fought a combined 127 times with 112 career wins between them, Marquez’s and Pacquiao’s career legacies will be shaped in large part by the four thrilling bouts they’ve had with each other. (After Marquez’s win Saturday, the number could become five. Top Rank, which promotes both fighters, would like to set them up once again later this year.) Boxing fans have long felt that the Marquez-Pacquiao rivalry has been so compelling because the two boxers employ contrasting styles that complement each other in a near-perfect way. There is Pacquiao, the most dynamic offensive fighter of his generation, and opposite him is Marquez, the counterpunching tactician nonpareil.

So given their famous differences and the decade of antagonism they’ve shared, it was fun to notice some tiny echoes of Pacquiao in Marquez’s performance Saturday night. On a purely superficial level, Marquez has let his mustache-plus-goatee facial hair grow in a bit — he had previously been keeping it etched in pencil-thin stubble. At the new length, it’s starting to look like Pacquiao’s beard. Perhaps this is Marquez’s first volley in the pre-bout PSYOPs for Pacquiao-Marquez V.

More significantly, the one-two combination that Marquez used to floor Alvarado at the end of the eighth round was a morsel of pure Pacquiao. The stutter-step feint to open up Alvarado, followed by the lightning succession of left jab, overhand right — it was like a mirror image of Manny’s signature southpaw one-two. Especially that feint, a telltale Pacquiao move that often precedes his inward surges. In fact, Marquez became so familiar with the move that he actually used it to time the now-famous right-hand counter that ended their last bout and left Pacquiao’s face buried in the canvas.

Saturday night, Marquez, perfectionist that he is, might have executed the move even better than Pacquiao does. Sometimes, after he makes his hesitation fake, Pacquiao will rush in face-first and slightly off-balance. That’s what he did against Marquez. When Marquez did his Pacquiao impression against Alvarado, there was no such error, just a flush, savage right hand and Alvarado crashing backward through the ropes.