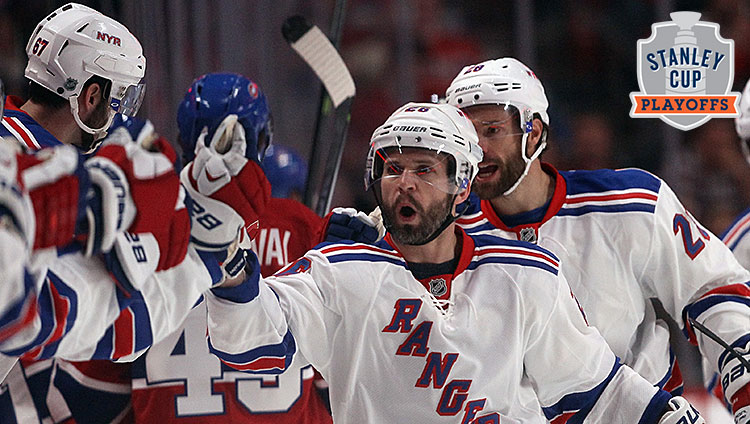 Here’s what we all knew for sure heading into Saturday’s opening game of the Eastern Conference final between the Montreal Canadiens and New York Rangers:

And here’s an updated list of what we know after Game 1:

By the time the game was over, Nash, St. Louis, and McDonagh had broken their slumps, Price was on the bench, and the Rangers had racked up seven goals in a stunning Game 1 win.

Compare that result to yesterday’s Game 1 of the Western final, which went pretty much the way you’d expect. We got strong goaltending, tight defensive play, the now-traditional confusing goalie interference call, a key goal by Jonathan Toews, and, eventually, yet another Blackhawks win on home ice. All of it made sense. Was that so hard, Eastern Conference final?

Apparently so. And since it turns out we didn’t have any of the answers we thought we did, maybe it’s time to start asking some Rangers/Habs Game 1 questions instead.

What the hell was that?

That was a 7-2 Rangers win in Game 1 of the conference final. They now lead the series 1-0. Game 2 is Monday in Montreal.

Yeah, but … what the hell was that?

It was an old-fashioned butt-kicking is what it was, one of the worst in Montreal’s storied playoff history. The Rangers outshot and outskated the Canadiens, and their once slumbering power play racked up three goals.

And as bad as things were for the Canadiens, in some sense the score may even have flattered them — the Rangers backed off a little after they made it 7-1, spreading out power-play time to some of their third- and fourth-line guys. And of the Habs’ two goals, one was a flukish short-handed goal that came well after the game was decided and the other was on a play that should have been whistled dead on a too-many-men penalty.

So have the Rangers somehow figured out the secret to beating Price and the Canadiens?

Probably not. As big a blowout as Game 1 was, it was just one game. And while it’s hard to remember now, it was actually a very close game until late in the second period. The Rangers were clinging to a 2-1 lead before scoring two late goals to make it 4-1 heading into the second intermission. They blitzed the Canadiens for three more goals early in the third, but those came with Price on the bench, so maybe you’re inclined to not even count them.

Wait, Carey Price didn’t play in the third? Is he hurt?

Price got up very slowly after being run over by Chris Kreider on this play early in the second period:

The play looked scary because Kreider went in skates first, and on the replay you can also see Price’s right leg get caught on the post for a moment before the net dislodged.

Price finished the period and seemed fine, although he gave up two late goals to put Montreal behind 4-1. He was on the bench to start the third, a move that could have been injury-related or simply a reaction to the scoreboard. Montreal coach Michel Therrien didn’t really clarify the matter on Saturday, and Price only spent a few minutes on the ice during Sunday’s optional skate.

We got the answer today: Price is out for the rest of the series.

Now that Price is out for the series, how screwed are the Canadiens?

The drop-off from Price to backup Peter Budaj is significant — this is not a team that has a 1 and 1A situation in net — and Montreal needs a win tonight to avoid going into New York trailing the series 2-0. This is a major blow considering how good Lundqvist has looked.

So … yeah, they are pretty thoroughly screwed.

Did Kreider do that on purpose?

He was coming in at full speed and was tripped at the last moment, so you can’t blame him for the collision. But there have been some media suggestions that he didn’t do as much to avoid the impact as he could have. And Habs forward Brandon Prust said the hit was “accidentally on purpose,” a notion Therrien didn’t really deny.

Nothing will come of the hit in terms of a fine or suspension, and it’s not like the Canadiens can afford to chase Kreider around looking for vengeance (and it’s doubtful they could catch him if they tried). Instead, this will probably turn into another “us against the world” rallying cry for a team that’s been pretty good at generating those recently.

What does Montreal have to do to get back in this thing?

The easy answer is “win tonight,” because if it does that we’ll spend the next few days talking about everything that’s wrong with the Rangers. (And we’ll have plenty of time to do that, since after tonight there’s only game over the next five days.)

Beyond that, the key will be to find a way to deal with the Rangers’ speed. Montreal is a small, skilled team that used that to its advantage against the big, bad Bruins, but against New York it was the team chasing the play. That speed disparity led to giveaways, goals, penalties, and even the Price injury, which came after Kreider walked around the Canadiens’ defense.

Speed is speed, and it’s not like the Canadiens can just decide to skate faster, but now they know what they’re up against and should be able to adjust accordingly. If they can neutralize New York’s skating advantage and find a way to make life difficult for Lundqvist, then they’ve got a good chance at evening up the series tonight.

Even a Montreal loss won’t spell certain doom, since we’ve already seen three teams blow 2-0 series leads this postseason (although none of those teams won the first two on the road). Most experts had this pegged as a long series, maybe even another seven-gamer, and one blowout shouldn’t change that view.

All of that depended on Price being healthy. Now that he’s out, we can all agree the Habs are done. After all, what are the odds we’d all end up being wrong about something in this series?

Conference Finals Preview: How the Absence of Ibaka Will Tip the Series to the Spurs