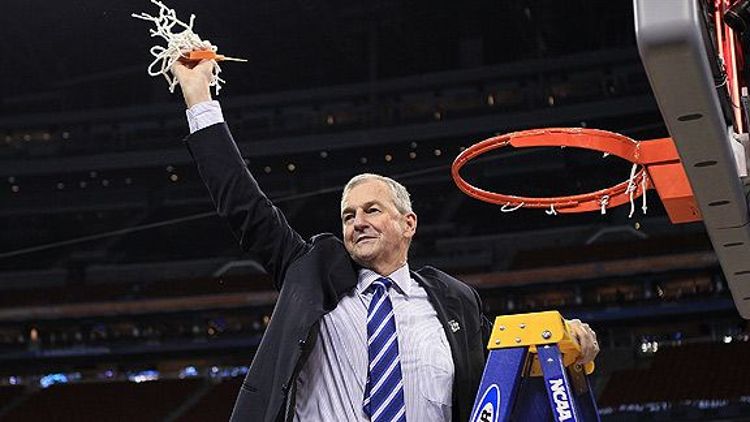 Amidst the hullabaloo stirred up this week by the ACC, the University of Connecticut athletic department threw its hat into the game of Superconference Scramble. Huskies fans, as a result, have been freaking the f*ck out. Since news broke that Syracuse and Pitt were heading south, the Hartford Courant has published somewhere between four and 87 articles about the situation, most of which have either implicitly or explicitly stated that UConn must flee to the ACC or else face certain ruin.

In a conference with a history of iconic basketball coaches who outsized their own programs — Thompson, Boeheim, Massimino, Carnesecca, Carlesimo, Pitino et al. — Calhoun has become bigger than them all. Unfathomable in 1988, Calhoun has actually become bigger than The Big East. Three national titles, myriad regular season and conference tournament Big East championships, a glut of first-round picks, and perhaps, most importantly, consistent national relevance. (Yes, that’s a dig at you Pitt, Georgetown and Villanova.) If the Big East crumbles, successful hoops programs like Villanova and Georgetown, despite their own history, will struggle to maintain national relevance in a conference that will have a decidedly A-10 feel to it. While some old-timers might enjoy the nostalgia of the metro-Catholic setup, to think that a Big East devoid of Pitt, Syracuse and potentially UConn would be anything other than subservient to an ACC that now includes those teams plus the Tobacco Road superpowers, would be insane.

In the mid-Aughts, after the 2004 title-winning team, Calhoun spoke frequently about “one more good-run” before retiring as a coach. It is now 2011, and Calhoun has officially had two more good runs and has won a national championship. He seems no closer to retiring than he did after the team won the 1988 NIT. This is despite the fact that the program has weathered scandals (Marcus Williams’ Laptopgate and L’affair Nate Miles), poor academic records (the team had two scholarships taken away this year due to poor academic performance), Calhoun’s own bouts with health problems, and a general public realization of what John Calipari must have figured out quite some time ago when he was getting the ball rolling at UMass — that Jim Calhoun is an a**hole.

After a brief blip in recruiting and some whispers that the famously competitive coach was getting a bit long in the tooth, Calhoun ginned up his greatest coaching performance, taking a team that had no business being in Sweet 16, let alone the Final Four and led them to a national championship, his third, putting him solidly on the Knight-Krzyzewski level of coaching greats. He did so smiling all the way, unapologetic as ever. For an encore, Calhoun dropped a bomb on the recruiting world by getting arguably the most talented prospect in the basketball universe, Andre Drummond, to pull a 180 and enroll at UConn a year before he was originally considering going to college. Hardly the moves of a man about to hang up the whistle.

Great college coaches seemingly become caricatures of themselves over time due to our familiarity with them on screen, and the little we may see of them in their lives off camera. We think of Calipari as a shark in a windbreaker, schmoozing reporters and forever legitimizing his recruiting practices. Mike Krzyzewski, probably the most famous coach in collegiate athletics, has come to be defined by his loyalty, dedication and down-right man-love for his own players. The most iconic images of Coach K are not him cutting down the nets, but of him hugging his players who inevitably return the hug in a manner that seems both incredible genuine and foreign to most humans who have dealt with coaches in the past. Calhoun has become defined by his galactic-sized competitiveness — raising a program from the old Yankee Conference to be a national elite when nobody said he could, flaying reporters and players alike who dare question his coaching acumen, developing a Walton-esque long windedness in answering questions despite a stutter, or simply having an under-sized Ricky Moore slide over and lock down Trajan Langdon (who Coach K had stuck with, loyally) to preserve his first national championship.

If Calhoun is going to stick around for another five years or so (by which time he would be in his 70s), his epic competitiveness won’t let Jim Calhoun’s Basketball Team, or Jim Calhoun’s Athletic Department suffer. They, and he, will succeed, regardless of what league they play in. Should they stay in a lessened Big East there will be no noticeable difference until Calhoun retires, at which point the program would be faced with replacing an all-time icon, a man bigger than the league he coaches in. All of which means two things: that the ACC is looking pretty good, if not now, then at some point in the future, and that the university president should keep Calipari on speed dial.

Patrick Hultgren is a Grantland contributor. This is his first piece for the site. Follow Hultgren on Twitter at @pjh9.