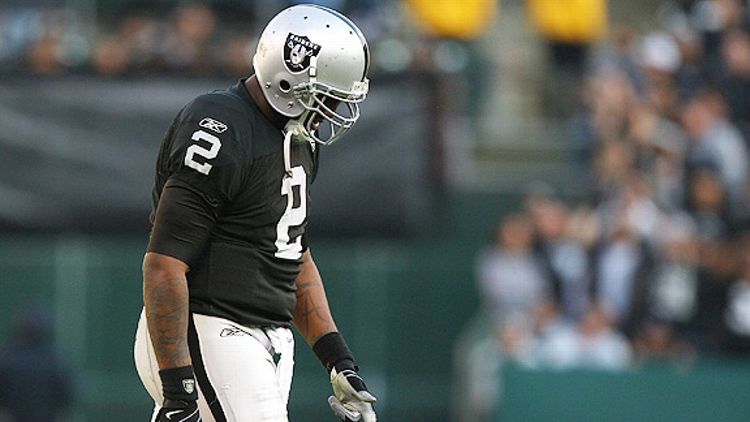 We figured the best way to sort through this article was a few rounds of point/counterpoint. Let’s start with the sleep apnea thing, OK?

Point: Russell blames his habit of sleeping in team meetings on sleep apnea. Sleep apnea is a very real and very serious condition that affects football players in shockingly high numbers.
Counterpoint: As Stephen A. Smith will tell you, sleep apnea is treatable. Oh, and sleep apnea is exacerbated by carrying excess weight.

Point: Russell claims the cupful of sizzurp in his house that led to his arrest was to deal with his sleep apnea.
Counterpoint: “According to the deputy, Johnny Thornton, he noticed a Styrofoam cup with ‘an orange-colored liquid’ sitting on the nightstand next to Russell. Ice still floated on top of the liquid. Thornton asked Russell if the drink was his. Russell said yes, but claimed it was only Kool-Aid.

“Thornton didn’t think so. The deputy sniffed a medicinal odor in the drink. Other officers discovered a bottle of codeine cough syrup in a closet cabinet, with the prescription label scratched off. Two other bottles with codeine residue, one prescribed to a California man, were discovered in an outside garbage can.”
Bonus Counterpoint: This thing I found on the Internet specifically says that you shouldn’t take codeine if you have sleep apnea. So there.

Point: Russell’s uncle Albert is a chemistry professor at Tuskegee University. No counterpoint, but that’s a fun fact, right?

Point: Russell says Drew Brees throws off his back foot too much.
Counterpoint: Russell once summed up a 12-21, 61-yard, 2 INT performance that had Raiders fans chanting “JaMarcus sucks” by saying, “I think I did all right. … I try to play with no regrets.”

Point: Russell denies rumors that his life coach, John Lucas, fired him. Instead, Russell says, “I felt like I was over-training, running my body into the ground, so I left Houston.” I don’t think anybody needs to fact check the notion that Russell felt he was over-training.

Point: Russell says he’s not broke. No counterpoint here. Russell earned $39.4 million in his three NFL seasons and seems to live near Mobile, Ala. So, yeah, this one is probably pretty solid.

Point: Russell feels as if coach Tom Cable was two-faced. “All of a sudden,” Russell says, “[Raiders head coach Tom Cable] flipped the script. I stuck my neck out for him. Didn’t complain when he benched me as the starter. Didn’t complain when he called the same plays five damn times. Didn’t [badmouth] him to other coaches. When the [media] asks me, I say, ‘He’s a good coach, a good guy.’ Then I hear he says I was the worst thing ever happened to the Raiders, if it weren’t for him we’d be in the playoffs? … It just got to where the game wasn’t fun for me.”
Counterpoint: Cable was probably never that high on Russell  if the legend of the blank DVD is to be believed. “[Raiders] coaches suspected Russell was not studying the game-plan DVDs they gave him each week, so they sent him home with a blank DVD. The next day, they asked Russell what he thought of the game plan. He said it looked good to him.”
Bonus counterpoint: Russell’s other former coach, Lane Kiffin, blasted him publicly as recently as Oct. 18.

Point: Russell, on why he didn’t go play in the CFL: “Name one kid in the world who says, ‘I can’t wait to play in the CFL!’ That s— don’t work.”
Counterpoint: “Last fall, Russell reportedly flew to Miami for a tryout with the Dolphins. After the tryout, the Miami front office had booked Russell for a flight out that evening. Russell asked if he could stick around another night at team expense so that he could visit South Beach. He received no contract offer.”

Point: “Veteran wideout Jerry Porter says Russell’s arm is the strongest he’s ever seen. More than that, teammates speak about his maturity.”
Counterpoint: One ex-coach called him a “binge eater,” former teammate Jeremy Newberry said he would walk from drill to drill in practice and was “more comfortable with a role as a backup.” Ex-teammate Dominic Rhodes confirmed rumors that he would sleep during meetings, later to be blamed on the sleep apnea.